CALGARY — The City of Calgary wants the provincial government to reinstate public health enforcement powers and "massively" boost contact tracing as it deals with what its mayor describes as a dire COVID-19 situation.
Nov 15, 2020 11:15 AM By: Canadian Press 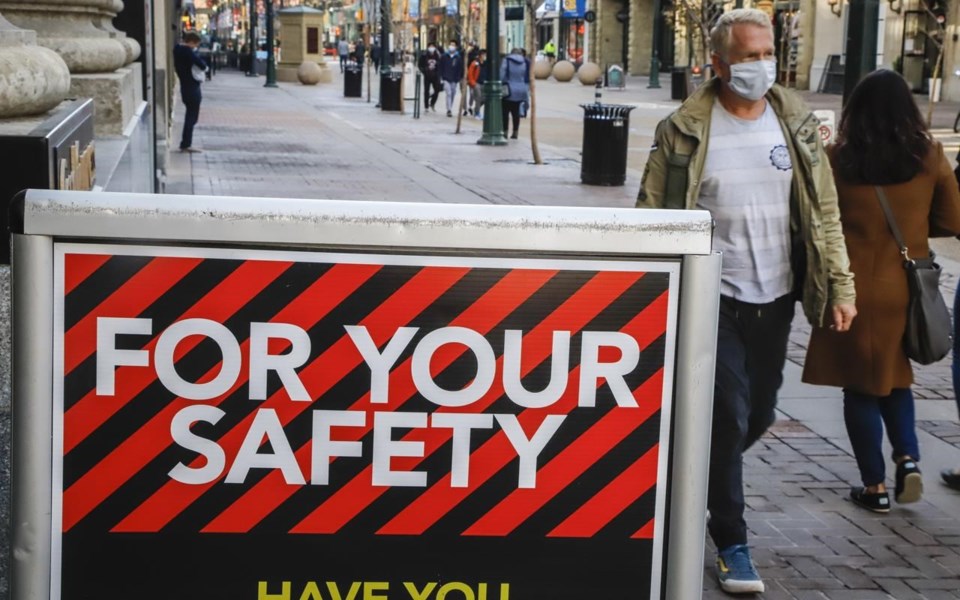 CALGARY — The City of Calgary wants the provincial government to reinstate public health enforcement powers and "massively" boost contact tracing as it deals with what its mayor describes as a dire COVID-19 situation.

"They are much worse than they've been at any point during the pandemic and we're going in the wrong direction."

There are more than 3,550 active cases in the Calgary zone, including 78 people in hospital and 13 in intensive care.

Nenshi made his remarks a day after Alberta Premier Jason Kenney introduced new restrictions for hard-hit areas, including a two-week ban on indoor sports and fitness classes and earlier closing times for restaurants, bars and pubs.

Kenney said his government is also “strongly recommending” there be no gatherings in homes and warned it may have to step in with fines if citizens don't fall in line.

"I'm a real proponent of a short, sharp, hard break," he said. "And that includes probably more things than we've seen currently in this break that's been called."

Sampson said a letter has been drafted to the province asking that city peace officers be given the power to enforce public health orders.

They had been granted that authority at the beginning of the pandemic, but those measures lapsed in June along with the city’s state of emergency.

"I'm optimistic that our provincial government will provide that capacity," Sampson said, adding he'd prefer citizens follow the rules and that the city not have to crack down.

"I've got women and men out there with uniforms and ticket books who currently cannot write tickets and I think that if there are people who are egregiously and flagrantly putting others at risk, they ought to get a ticket," the mayor said.

"The first focus will also be on public education and to work with owners/operators before moving to enforcement action," McMillan said in a statement.

Sampson said if a liquor-serving establishment is flouting the closure rules, police can issue tickets at their discretion.

"If it's a wilful and purposeful attempt to get around the closures, they will deal with it."

Nenshi said his most pressing concern is adding more contact tracers, because two-thirds of active cases have no known source.

"The Number 1, biggest, most important thing we can do right now is massively ramp up the contact tracing and I mean double, triple, quadruple, quintuple the number of people who are doing it," he said.

He said with such a grim economic situation in the city, he'd like to partner with the province and businesses to put unemployed Calgarians to work contact tracing, potentially with the help of the federal emergency wage subsidy.

"And that should be happening starting now."

This week, more than 430 Alberta doctors and three major health unions urged Kenney to introduce more stringent, short-term measures to reduce the impact on the health system. They want a shutdown of indoor dining, bars, theatres and religious services.

Kenney has resisted calls to shutter businesses, particularly retailers and restaurants, saying that getting Alberta through the crisis and beyond means balancing health, the economy and the community.

One of the signatories to the letter, infectious diseases specialist Lynora Saxinger with the University of Alberta, said she has concerns whether the new restrictions will prove effective.

“The restrictions that were announced really seem tailored to where we were a few weeks ago,” Saxinger said in an interview.

“It might not be enough right now given the aggressiveness of the increases that we’ve seen and the fact that we don’t really have the contact tracing data to tell us whether those are the right places to restrict.

“Closing down the bars at 11 p.m.? Does anybody really think that’s going to make a difference in this second wave?” said Vipond.

“There’s just a real sense of betrayal,” he added.

“It’s like sending your soldiers to war without helmets. We want to go out there. We want to help, but back us up, guys.”

- With files from Dean Bennett in Edmonton

This report by The Canadian Press was first published November 13, 2020.

Note to readers: This is a corrected story. An earlier version suggested Calgary police officers do not have the power to enforce public health orders.

'No crying': Venezuelan refugee Kenney cited says interaction was less dramatic
Nov 27, 2020 12:45 PM
Comments
We welcome your feedback and encourage you to share your thoughts. We ask that you be respectful of others and their points of view, refrain from personal attacks and stay on topic. To learn about our commenting policies and how we moderate, please read our Community Guidelines.