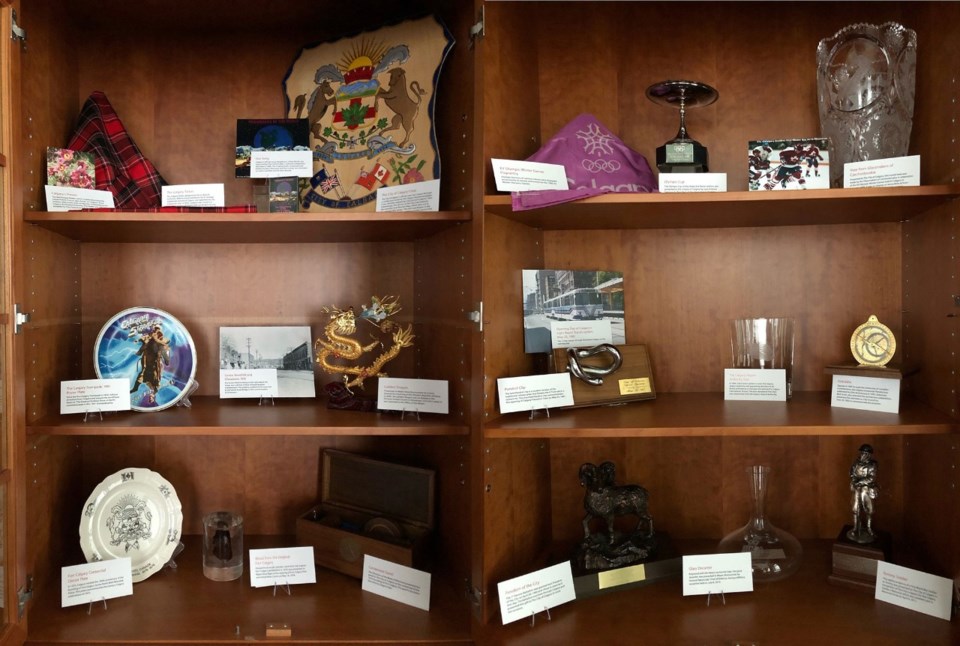 The Mayors' office display, part of the Calgary Archives. Photo: City of Calgary

The City of Calgary Archives has been providing service to civic employees, researchers, writers, students and the public for 40 years. It has preserved the memories, records of decision making and the delivery of city services, increasing government transparency and accountability. More recently, the creation of online exhibits is making collection highlights even more accessible for citizens.

“Municipal records document the evolution of our society throughout the years by providing evidence of what was considered to be of importance at a given moment in time,” said Susanne Clark, The City of Calgary Archives Coordinator. “This accessibility to information allows us to learn from our past experiences in order to build a better future.”

In April of 1971, the City of Edmonton established its own municipal Archives, but in Calgary, the Records Control Committee was in charge of records disposition. The Glenbow Foundation and Calgary Public Library were responsible for the appraisal and selection of historic city records. This arrangement was formalized in March of 1973 by the Board of Commissioners and the Glenbow became the official City Archivists. This arrangement continued until 1979, when the growth of city records outpaced the Glenbow’s ability to manage within its mandate. In addition, The City’s overflow records storage on the 2nd floor of the Simmons Mattress Company Building became structurally unsound, so City Clerk Joyce Woodward started making plans for a city-operated Municipal Archives.

On June 7, 1990, the Archives opened its doors to its new location on the 1st Floor of the Administration Building. This new space included an environmentally controlled storage area and a larger reading room to better accommodate staff and researchers.

The continuing growth of the archival holdings resulted in the need for additional offsite storage. This resulted in a move to the 4th Floor of the Trade Centre Building in 1993. This new location was walking distance from the Administration Building which facilitated records retrieval from offsite storage.

The year 1994 was a time of fiscal restraint at The City. The leadership of The City of Calgary Archives was blended with Corporate Records. The archival program continued to grow and develop. It grew to a point where in 2012 more specialized offsite storage was needed, so a new special storage area was constructed within a northeast warehouse.

The timing of this move to the new offsite warehouse location was fortuitous, as the Trade Centre was isolated and under water during the 2013 flood. The main holdings of The City of Calgary Archives were spared from the disaster due to the elevation of the City Hall C-Train platform and the Municipal Building parkade. According to maintenance personnel, the flood waters came within inches of breaching the floor of the Archives storage.

In 2019, under the new leadership of Susanne Clark, City of Calgary Archives Coordinator, the Archives has continued to evolve to deliver services to Calgarians, Administration and City Council. Recently, The City of Calgary Archives enhanced its web presence to better support the delivery of digital content and measures have been taken to preserve digital records.

The 2020 pandemic resulted in the longest period of public closure of The City of Calgary Archives since its inception in 1981. In order to continue providing a high-level of public service, the Archives temporarily revised its reference service model and conducted research on behalf of researchers to minimize service interruptions.

As The City of Calgary Archives marks 40 years, it will continue to build on the legacy that this milestone anniversary celebrates. It will continue to bolster interest and expose the Archives to a wider audience through the development of online exhibits, participation in promotional events such as Historic Calgary Week and Doors Open YYC, give presentations, and promote Calgary history through social media.

For more information on the Archives or to access the records at The City of Calgary Archives, email archives@calgary.ca .

Article courtesy of The City of Calgary

Alberta government adds travel to the prize pot for those who get both vaccine shots
Jun 16, 2021 11:05 AM