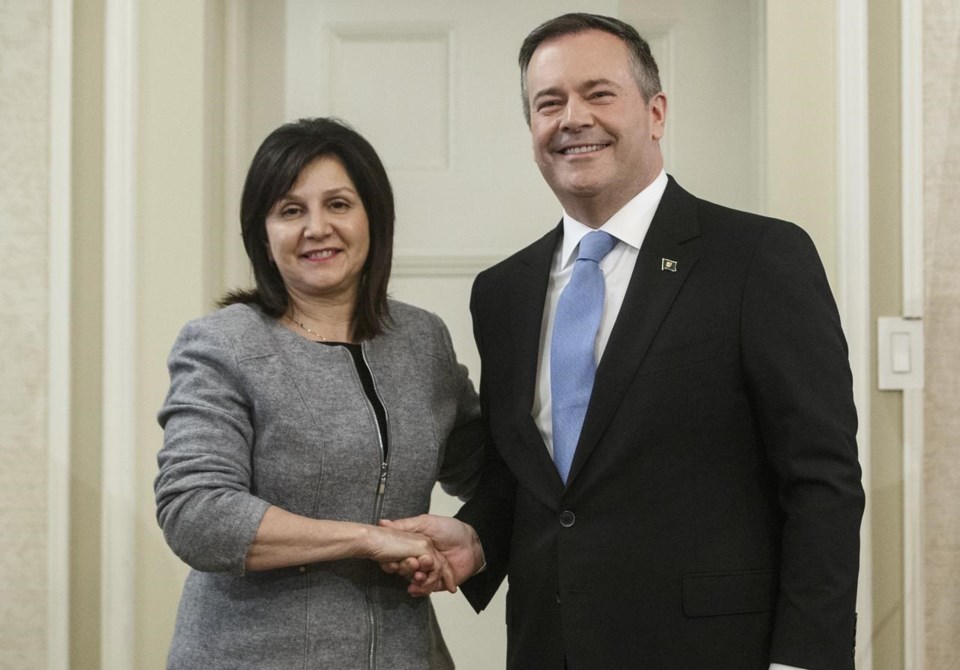 Alberta premier Jason Kenney shakes hands with Adriana LaGrange, Minister of Education after being is sworn into office, in Edmonton on Tuesday April 30, 2019. An independent review has found the Calgary Board of Education focuses too much on protecting individual members and not enough on its long-term financial sustainability. THE CANADIAN PRESS/Jason Franson

CALGARY — An independent review has found the Calgary Board of Education focuses too much on protecting individual members and not enough on its broader mission and long-term finances.

"Overall, the findings are indicative of an organization that has undergone turmoil at the governance level with a focus on process over function and a short-term view of financial sustainability," accounting firm Grant Thornton wrote in a report released Thursday.

They include hiring a minister-approved governance instructor and evaluating ways to reduce risks associated with the pricey headquarters building the board leases in downtown Calgary.

It also recommends the board consider eliminating all half days to save on transportation costs and do an updated salary survey.

"The overall findings lead me to believe that there is a dire need for improvement," said LaGrange.

"Perhaps the most concerning of all is the finding that the board's short-term view focused more on protecting individuals on the board rather than fulfilling their overall mission."

LaGrange said the board has until Nov. 30 to meet all recommendations, or trustees will be fired.

She said it's a realistic target, even as the COVID-19 pandemic keeps schools shuttered. The minister added she debriefed with trustees Wednesday and they have already begun to act.

The Calgary Board of Education did not immediately respond to a request for comment.

She said at the time that she was disappointed the board announced it would lay off more than 300 contract teachers instead of working with her ministry to find other ways to cover a $32-million budget shortfall.

The teacher cuts were averted after the province allowed a $15-million infrastructure and maintenance renewal grant to be repurposed.

At the time, LaGrange accused the board of "reckless misuse of taxpayer dollars." She pointed to its decision to enter into an expensive 20-year lease for its new head office almost a decade ago as an example.

The Grant Thornton report did not use language nearly that strong to describe the improvements it said should be made.

It highlighted some things the board has done well, such as keeping maintenance and planning costs in line with other big city school boards and having appropriate procurement practices.

Sarah Hoffman, the NDP Opposition's education critic, said the review is about finding someone else to blame for education cuts made by the United Conservatives government.

"About 5,000 new students are expected to attend CBE schools next year and their total funding is still less than it was under the last NDP budget," she said in a statement.

This report by The Canadian Press was first published May 21, 2020