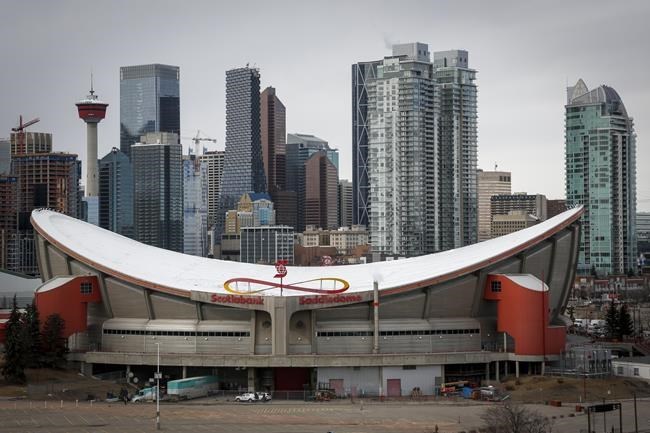 The Saddledome, home of the Calgary Flames, is shown in Calgary, Thursday, March 12, 2020. Calgary will start construction on an event centre that will be the new home of the NHL's Flames in August 2021. THE CANADIAN PRESS/Jeff McIntosh

Calgary will start construction on an event centre that will be the new home of the NHL's Flames in August, 2021.

The venue that will replace the 37-year-old Saddledome is scheduled for completion in May 2024.

The city and Calgary Flames and Entertainment agreed in 2019 to split the cost of the new building on a parcel of land just north of the Saddledome on the downtown's east side.

The event centre is one phase of a revitalization plan for the area along with expansion of a convention centre on the Calgary Stampede grounds.

The look of the arena will come from a partnership between the Calgary design company Dialogue and the American international architectural and engineering firm HOK, according to a statement from the Calgary Municipal Land Corporation (CMLC).

Dialogue's recent projects include Calgary's Central Library and cancer centre as well as an airport expansion.

"As we move forward with the development of this facility, we are confident this project team brings the experience, leadership and ambition to realize the full potential of what the event centre provides Calgary," Flames president and chief executive officer John Bean said Wednesday in a statement.

"With their experience of large-scale sport and entertainment facilities, we know that Calgary's new event centre will be a source of civic pride for many years to come."

This report by The Canadian Press was first published June 24, 2020.

Alberta 'stay'cation should include a visit to this historic garden
Jul 2, 2020 9:00 AM
Comments
We welcome your feedback and encourage you to share your thoughts. We ask that you be respectful of others and their points of view, refrain from personal attacks and stay on topic. To learn about our commenting policies and how we moderate, please read our Community Guidelines.