Little ones give seniors a big boost

Residents of Tudor Manor, a supportive living facility in Okotoks, are enjoying the pitter-patter of little feet these days.
Jan 1, 2019 11:00 AM By: Chris Puglia 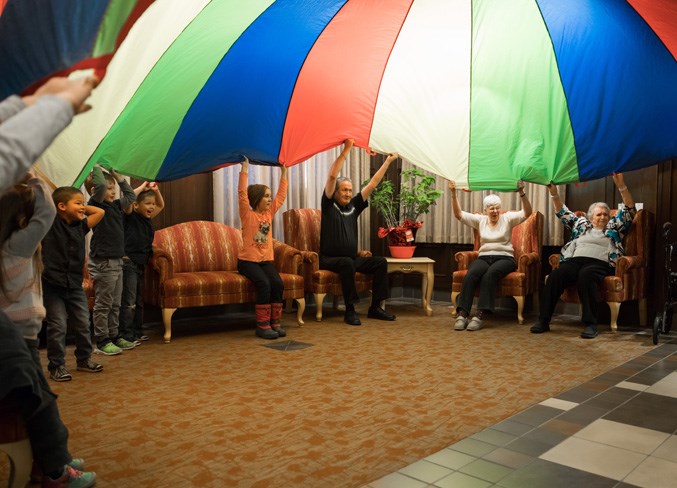 Seniors from Tudor Manor and children from V.I.K. Academy particpate in a parachute activity.

Residents of Tudor Manor, a supportive living facility in Okotoks, are enjoying the pitter-patter of little feet these days.

A new daycare facility, which opened late 2018 in the seniors facility, has been an opportunity to provide much-needed affordable care to community parents while building connections between children and residents.

The partnership between V.I.K. Academy and the Brenda Strafford Foundation's Tudor Manor is a multi-faceted opportunity offering parents a facility covered by the province’s $25-per-day daycare pilot, French language immersion and intergenerational programming.

Julie Errmann, CEO and founder of V.I.K. Academy, says she wanted the program to offer more than childcare and language education, but also be a place where children could grow emotionally.

That is where the intergenerational programming and interacting with the senior population of the manor comes into play.

“Tudor Manor has always been involved with bringing other generations into its programs,” says Errmann of why the partnership has shown such synergy.

Through weekly activities, such as baking, crafts and sports – even Halloween activities, carolling and a Terry Fox walk – with the residents, both the children and the seniors are forging beneficial relationships.

“This program gives children an opportunity to make a connection with a senior,” she said, adding those connections are being made on both sides.

“At the end of my shift, I walk out the door and I see the seniors waiting out in the sitting room. They like to hang out and see the children going home,” she says, adding that when schedules change unexpectedly there will always be residents coming to her office to ask where the children are.

Brenda Carroll, Tudor Manor’s administrator, says the daycare has been a wonderful addition to the facility that has resulted in an enhancement of the culture at the manor.

During the grand opening, Carroll related a story a resident told about how having the children integrated into the dally life of the manor has provided her with “renewed purpose.”

Carroll says she has seen for herself the added vitality the children have brought to the facility.

“It’s filled our residents with inherit joy that we as adults can’t replicate,” she says.

“Kids and animals are the only two things that can evoke that kind of response.”

Carroll enthusiastically speaks about the benefits to emotional and mental health she has witnessed in the residents of the manor. She also explains the program is a chance to help children build a comfort and awareness about aging while dispelling some of the associated stigma.

“The children are realizing that we are all people and we all add value to the world,” she says. “They are not even seeing the age difference sometimes.”

She illustrates that point by sharing a story about a child who brought a toy train to one of the residents, and the child called the senior a friend.

“I’m just so proud of this program and excited about it,” Carroll said.

Kathleen Silvester has been a resident of Tudor Manor since January 2018 and is happy to have the children as part of manor life and their presence has been enriching to the resident’s lives.

“I love the children here.  They bring such a ray of sunshine and truly brighten up our lives,” she says. “I feel my life is greatly impacted and it lifts my spirits.  I so look forward to the activities we do together on Thursday mornings.

“Last week, we decorated gingerbread houses together and it was so much fun.”

The care program is open to children 19 months to 5 1/2 years of age and is currently full, but Errmann expects an intake come the spring or summer when the kindergarten-age children are no longer eligible.

Maria Azucena Pena works for Tudor Manor and sends her child to the care program. Aside from the affordability and convenience of the program, she says there have been noticeable positive changes in her son, Adrian Medina.

“He loves going to the program,” she says. “The program allows our children and the residents to have a loving connection as a grandchild and grandparent.”

About the Author: Chris Puglia

Chris is a SAIT-trained journalist with more than 20 years of experience.
Read more