Alumnus remembered as a savvy business leader, community builder and champion of education.
Apr 28, 2021 12:00 PM By: University of Alberta 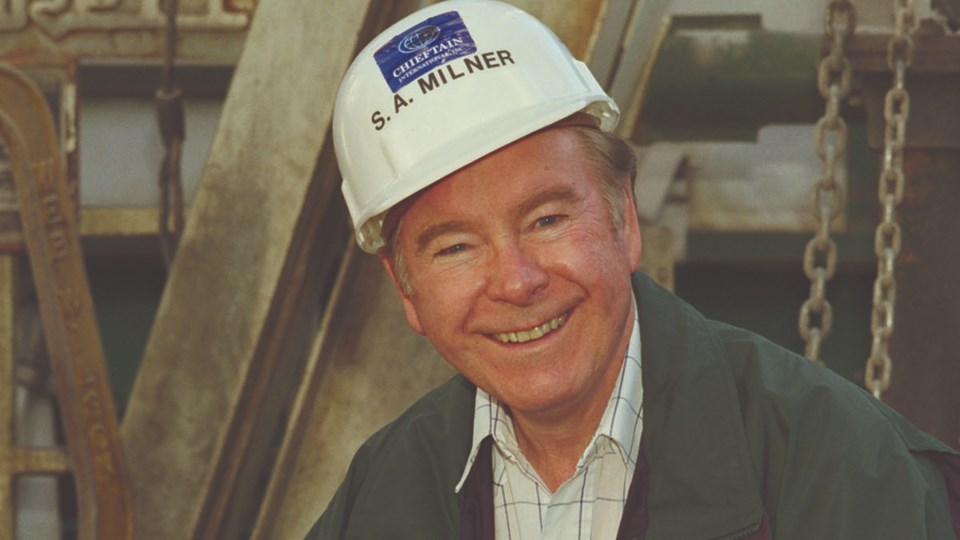 Stanley Milner, who passed away earlier this week at the age of 91, was a leader in Alberta’s energy sector, a prominent community builder in Edmonton and a champion of post-secondary education. Photo: U of A

The University of Alberta is mourning the passing of former board chair Stanley Milner, a leader in Alberta’s energy sector who will be remembered as a community builder and champion of education. He was 91.

Milner was born in Calgary in 1930 and raised in the hustle and bustle of pre-war Turner Valley, where Western Canada's first commercial oilfield was setting the stage for the province's prosperity and Milner's own success.

The Milner family would move from Turner Valley, making stops in Saskatoon, Gimli and Winnipeg.

It was in Saskatoon that Milner joined the 2nd Battalion Saskatoon Light Infantry as a bugle boy when he was 15. Serving in the military ran in the Milner blood as seven family members served, beginning with his father, Joe, the first Albertan to enlist in the Canadian Expeditionary Force during the First World War.

Equally important to his military service was post-secondary education, which Milner received at the U of A in the form of a bachelor of science degree from the Faculty of Engineering.

Alberta’s rough-and-ready entrepreneurial environment was the perfect setting for many U of A grads of the day, including Milner, who showed an aptitude for engineering and business. Embarking on a career in the oil and gas industry, he moved quickly from hands-on engineer to investor in the famed Leduc No. 1 oil discovery.

From there, Milner would go on to help develop the first natural gas utility service in the British Columbia interior before forming Canadian Chieftain Petroleums Corporation with two of his brothers in 1964.

His business acumen and leadership were sought out more broadly as he took leadership positions with a wide range of corporations, including Alberta Energy Company, the Canadian Imperial Bank of Commerce, Canadian Pacific Limited, Wardair and Woodward Stores Ltd.

Milner’s business success afforded him the opportunity to exercise his other passions: community building, philanthropy, Edmonton and the U of A.

He served a term on the Edmonton City Council from 1962-63 and ran for mayor of Edmonton, narrowly losing the 1963 Edmonton municipal election to William Hawrelak.

He was also among a group of city leaders in the 1960s who worried about the state of the downtown core, and understood that its deterioration would lead to increased social costs. Their solution was to get behind the 1967 construction of the Centennial Library, which was renamed the Stanley A. Milner Library in 1996.

“You have to consider a library is the beginning of education,” said Milner at the reopening of the Edmonton Public library’s renovated flagship last September.

Milner’s charitable endeavours seemed to touch every corner of Edmonton and knew no bounds. He held senior leadership positions on boards for the Royal Alexandra and U of A hospitals, the Edmonton Community Foundation, Edmonton Northlands, Edmonton Symphony Orchestra and the Edmonton Football Team, the Salvation Army and the United Way.

He also served on the board of governors for the U of A and as board chair from 1991-93 in what was a challenging financial time for the province and the university.

“He cared very much about the financial stability and independence of the U of A, and I know he went to bat for the university,” said Joseph Doucet, Stanley A. Milner Professor, dean of the Alberta School of Business and friend of Milner’s.

Doucet noted that when he met Milner 15 years ago, the Edmonton paragon was already a senior statesman who would talk about the role and importance of the university.

“He believed that it was important for the post-secondary sector in Alberta to continue to flourish and for the U of A to continue to be the flagship university," Doucet said.

Milner’s interest in business and education prompted his participation in the U of A’s Business Advisory Council. In 1991, in conjunction with the Faculty of Business, he established the Stanley A. Milner Chair in Leadership awarded annually to the dean, which is intended to further the understanding and development of effective leadership.

U of A president Bill Flanagan said he had the good fortune of meeting Milner for the first time back in January and was struck by how generous of spirit he was.

“I was amazed how passionate and how hopeful Stan was for the city and the university,” said Flanagan. “He played a leading role creating the thriving province that we enjoy today, but his legacy will be as a forward-looking civic and university leader.”

Over the years, Milner received numerous honours, chief among them the City of Edmonton’s Certificate of Meritorious Service, the U of A’s Canadian Business Leader Award, the 125th Anniversary of Confederation Commemorative Medal, the Alberta Order of Excellence in 1995 and the Order of Canada in 2003.

In 1990, Milner was appointed honorary lieutenant-colonel of the South Alberta Light Horse, and was also an honorary member of the Loyal Edmonton Regiment. In 1994, he was awarded an honorary doctor of laws degree from the U of A.

“For him it was really important to contribute to the development of not just his own personal enterprise, but also the community,” said Doucet.

“More than that, he was just a really good man and a great Albertan. We will miss him.”

Article courtesy of University of Alberta

Commentary: Anti-Asian racism a worrisome by-product of the pandemic
May 5, 2021 1:30 PM