After retiring from the Edmonton Public School system in 2009, Emma Shirley Brinson had only a few months to relish freedom, before disaster struck.
Jul 7, 2015 12:00 AM By: Alberta Prime Times 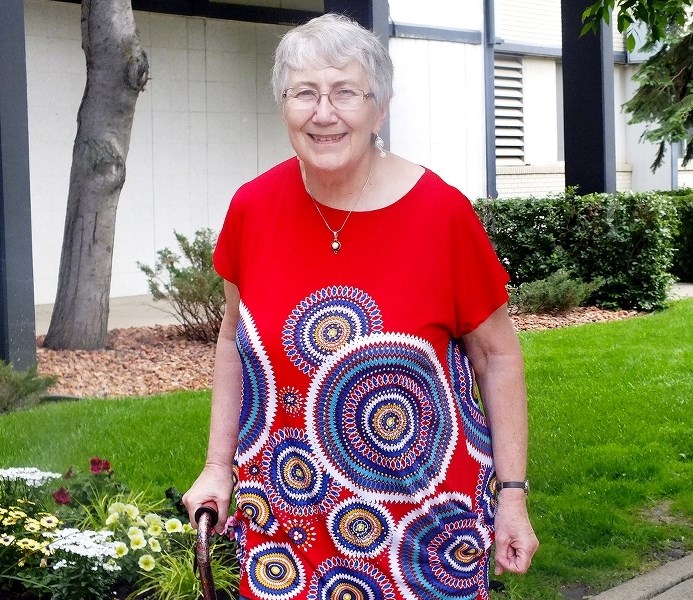 After retiring from the Edmonton Public School system in 2009, Emma Shirley Brinson had only a few months to relish freedom, before disaster struck. She fell from the balcony of her house and fractured an ankle, an injury which required surgery and many months of rehabilitation. While recuperating in the long term care center she underwent a common test which showed blood in her stool. The final diagnosis: colorectal cancer.

A good friend opened up her home to Brinson, where she stayed for nearly a year while undergoing and recovering from chemotherapy and surgery. She developed neuropathy in her hands and feet as a result of the treatments, which has left her feeling like she's walking on wood chips and comes with loss of sensation in her feet, fingertips and hands, making her hobbies of needlework and quilting difficult and many household and yard tasks almost impossible. Nevertheless she continues to create meticulously crafted quilts, cross stitch and needlepoint tapestries.

A nurse at the Cross Cancer Institute commented to Brinson while taking her history that a traumatic event such as a serious fall often later results in a cancer diagnosis. According to the Canadian Cancer Society, new screening techniques have significantly reduced the incidence of colorectal cancer in men and women through early detection. In the meantime, Brinson is participating in a three year trial study at the University of Alberta to determine if regular exercise results in fewer cases of relapse in cancer patients. Here, cancer survivors forge friendships with one another alongside their regular workouts. So far Brinson has been cancer-free for over three years, cleared by a variety of tests such as CT scans, bloodwork and repeat colonoscopies. Her oncologists coordinate treatments and visits with specialists, as well as her family physician.

As a result of scar tissue from the original cancer surgery Brinson had repeat surgery and has twice been hospitalized with obstructive bowel disorder, most recently in May 2015. The fall resulted in traumatic arthritis, and she had left knee replacement surgery in March 2015. Surgery on the right knee is scheduled for next year. Despite still being in recovery from the left knee replacement surgery, Brinson is going to Sri Lanka for five weeks this summer with friends.

At 66, she is not that old. Her cheerful nature and optimism in the face of poor health and unfortunate accidents testify to a devout faith in God and humanity. How long will the cancer remain in remission? It is an ever-present concern in part due to reports of deaths in the community of survivors she has come to embrace. Everyone has their own story. Emma Brinson refused to give up her home, her interests, her health or her passions. Faith, hope, and love can carry us through, as well as realizing the value of regular medical screenings and attention to safety, fitness in our senior years, caring relationships and hopefully quality of life.