A Wren In Good Times

In late May, I was down in Southern Alberta taking part in a couple of bird and plant species counts.
Jul 7, 2015 12:00 AM By: Alberta Prime Times 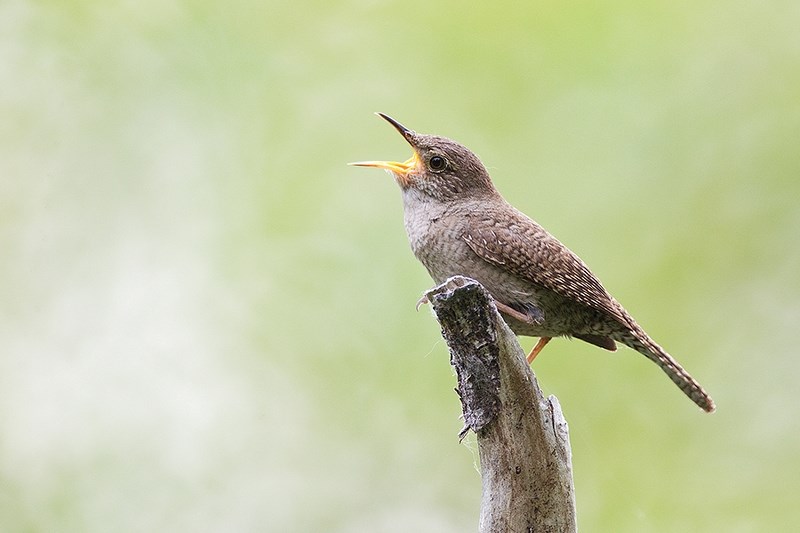 In late May, I was down in Southern Alberta taking part in a couple of bird and plant species counts. I have organized such counts for close to 15 years now, one weekend in Brooks followed by a couple of days in the Writing-on-Stone PP/Milk River area. It is always interesting to study the various migration patterns and try to figure out how climate change is affecting this annual movement northwards to the breeding grounds. The house wren usually arrives late May so the timing is good for my stay. I usually use the same campsite every year as it is surrounded by low bushes and old trees, which the wren seems to prefer. They set up territory close to each other and appear quite friendly with very few clashes. Usually their turf, so to speak, is shared by one of my favorite sparrows, the Spotted Towhee so there is always plenty of action around site 51.

The house wren is a plain brown bird with a lively song that can be best described as bubbly and energetic. This wren is a common backyard bird over nearly the entire Western Hemisphere; listen for its jumble song as the bird zips through shrubs and low tree branches, snatching at insects. This wren will gladly use nest boxes but has also been known to nest in old oil drums or boxes laying around in the garage. Not sure why the wren does this, but the nest box is filled up with twigs and other plant material and one has to wonder how it moves around inside the box!

It is small and compact with short wings, a flat head and a fairly long, curved beak. It often keeps its longish tail either cocked above the line of the body or slightly drooped. The overall color pattern is a subdued brown but has some darker barring on the wings and tail.

In summer, this wren feels at home in open forests and areas with scattered grass and trees. Look for abandoned farm buildings. Your backyard or nearby city park is perfect for them to set up their territory. A good backyard tip is to remember that wrens love brush piles for cover, protection and a source of insects. If you need to prune the garden tree or bush in the yard, consider heaping the cuttings into a pile as a safe place for birds to gather. The cheery song sparrow is a good example. As with many birds, your ears can help lead you to house wren sightings. The song can be hard to learn at first as the notes are rather nondescript and variable and there is simply a lot going on, but once you figure it out, you'll have no problem locating the bird.

If you wish to hear the house wren's song, go online and link to the Cornell Lab of Ornithology's Macaulay Library website.