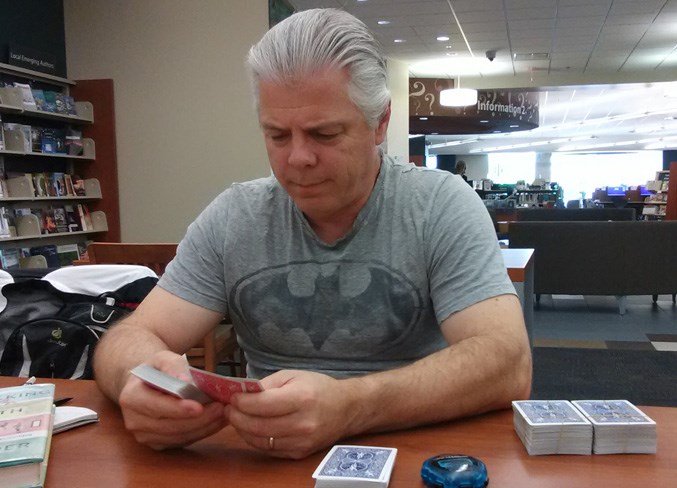 “My memory is the same as anyone’s”: Jim Gerwing, who can memorize 114 random numbers in 5 minutes

You want to remember someone’s names at a party. Or just memorize a deck of cards. The prescription isn’t to try and hardwire the actual names or numbers, but to use your natural capacity for retaining visual information and for story.

“There is technique involved. You have to do the initial work to frontload, but when doing the actual memorization there has to be the creative aspect,” says Jim Gerwing of Sherwood Park. “You have to use free association as well.”

Gerwing can demonstrate this with ease. He recently placed third at the 2018 Canadian Memory Championships in Toronto.

At 59, Gerwing has always been the oldest contender in competition. He has good prospects for a top placement in the Canadian masters.

“I don’t know of anybody at my age in Canada who is close to beating me. When I turn 60, I think I could score at the masters level with at least third place,” he surmises.

Memory athletes use what’s known as a ‘memory palace’, in which they assign visual or auditory references and then recall them in a set amount of time. For Gerwing, creating a storyline isn’t the first impulse.

“For me it’s not about a story. It’s more using a well known path, such as my house,” he says, noting the process involves a kind of mental map. “So, you go along in your mind, and at different stops on the map, you put something at each one.”

Using his house as a demo for memorizing a list of random words, the front door is the first station on his map, the second is the fireplace, the third a bird cage, and so on. At each location he makes note of whatever association comes up.

The first word on his demo list is ‘man’ and the second is ‘brag’, so at the fireplace his man, who happens to be Donald Trump, throws a piece of wood into the fire. Gerwing hears the wood bragging ‘Ha, I won’t burn’. The next word is ‘wheat’, so at the bird cage, he sees the bird cracking open a grain of wheat.  And on he travels to each location.

Gerwing’s first fascination with memory was in elementary school.

“Back in Grade 1, there was a poetry competition that my mom prepared me for. I was really interested in that I could recall those words in that order.”

A few years later at an Esso station, he was bored and picked up one of the abridged book series the gas station was giving away.

“Those books would just would get chucked onto the floor of the car. I picked one up and read it. It was Ten Days to a Successful Memory, by Joyce Brothers,” he recalls. “A lot of the memory tricks that memory athletes need were in there.”

It wasn’t until his undergrad term at Red Deer College that he used his knowledge for real benefit. He was studying for a test on fetal development.

“I was really stressing about it, and I remembered this method for memorizing. So I put the stages of fetal development in an orderly path around my apartment.”

He passed the exam, surprised by how well the method worked.

Then around 2014, after reading Moonwalking with Einstein by Joshua Foer, he took a more serious interest and found an online course for memorizing a deck of cards. The modules didn’t work until he changed the suggested memory palace from a car to something much more familiar, his house.

“I couldn’t remember what card was at each station in the car. I said, that’s not working, so something I know really well is my house.”

An Alberta Memory Champion three years running, Gerwing attended his first Canadian championship in 2016 in Montreal, where participants were timed in four disciplines: names, words, numbers and cards. He remembers “doing badly”, but the challenge kept him coming back. Two years later in Toronto he showed big improvement, edging out a young PhD student for third place.

As to what makes for good memory recall, the first thing is presence, he says.

“If I meet someone and want to remember their name, I have to be present. I stop the whole social process when I hear their name.”

He’s also used his skill to make it through difficult emotional events. For a eulogy he once had to deliver, he decided to put his speech into a memory palace beforehand.

“I found I could be calm during the earlier socializing, and when it came to podium, I simply went through my memory palace. I was still calm, I was able to look people in the eye while I was speaking.”

Anyone can do it, he insists.

“Without the methods, my memory is the same as anyone’s.”

Gerwing, who’s an educator in the Edmonton area, has done some research on how age ties into memory sports.

“Except for the presence of disease, in general memory does not decline precipitously with age,” he says, noting that the mental challenge and having something to keep him interested is a wider benefit.

“I can pop out of bed at 5:30 in the morning, go straight to memory practice. I look forward to it. The 132 random digits I just did this morning leaves me with a sense of accomplishment.”

For more information, go to the CMC website at www.canadianmemorychampionships.ca or email Jim Gerwing at jim.gerwing59@gmail.com.