'All you got:' Extreme Edmonton runners find comfort outside in rain, snow or hail

EDMONTON — Sheryl Savard of Edmonton recites a mantra to herself over and over again when running outside on some of the coldest winter days. “All it takes is all you got.
Nov 23, 2020 9:30 AM By: Canadian Press 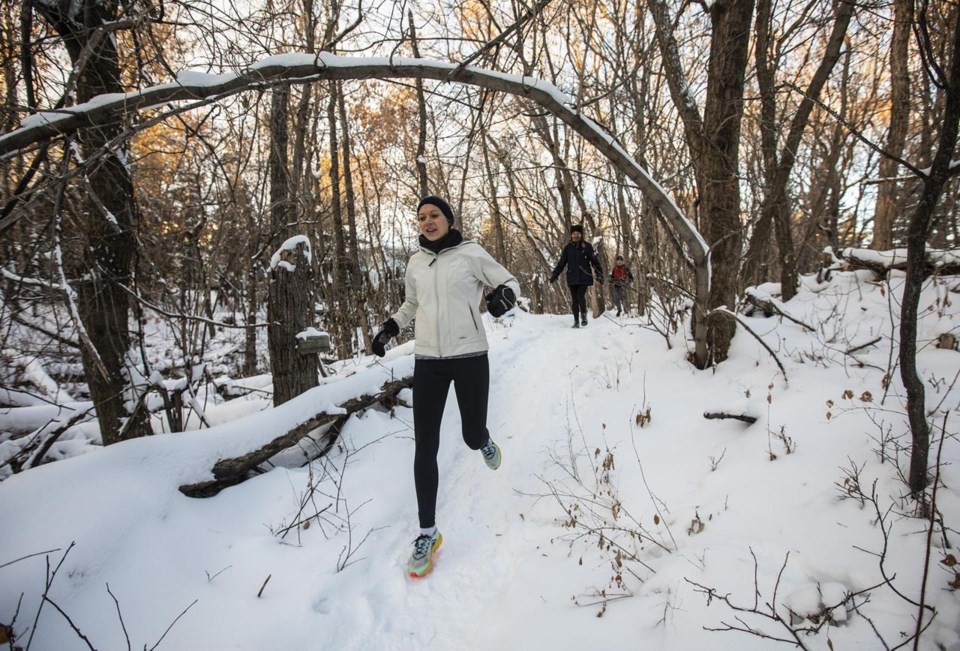 Edmonton Trail Runners go for a long run with various elevations along the trails in the River Valley in Edmonton, Saturday, Nov. 21, 2020. The runners also run under extreme weather conditions, including when its -40 C. THE CANADIAN PRESS/Jason Franson

EDMONTON — Sheryl Savard of Edmonton recites a mantra to herself over and over again when running outside on some of the coldest winter days.

“All it takes is all you got.”

Even when temperatures drop to a nostril-sticking -40 C with the wind and the sun is gone, the 50-year-old and others in the extreme running group she founded bundle up in their warmest wool and quilted layers and head outside.

Whether there's rain, snow, sleet or hail, Savard says they're out twice a week — Saturday mornings and Tuesday nights — because they need to do what they love the most: running.

Savard, a privacy officer at MacEwan University, says she also loves a challenge.

"And the other big thing that I'm really enjoying about running is actually the social aspect."

Savard started Edmonton Trail Runners six years ago. At the beginning, she says, some members stopped showing up in the winter. But that's hasn't happened this year during the COVID-19 pandemic.

And the group's numbers continue to grow, despite the drop in temperatures.

"Normally (people) would have started hibernating, but they've just said they're feeling so isolated," Savard says.

"A couple of us stayed back with them and coached them through how to approach the downhill. So everybody sort of takes care of everybody else."

The group runs along dozens of trails in the city's river valley stretching along the North Saskatchewan River.

The paths are usually clear as the runners head out single file at various paces, sometimes in pitch-black darkness. The only thing guiding them is the person in front of the them and their bobbing headlamps.

"It's actually really hard to maintain a consistent pace because of the elevation changes … so we run for time. On Saturdays, it's always 90 minutes," says Savard, adding the longest trail run she has completed was 105 kilometres.

"I always believe in reaching beyond my grasp, and we really encourage that."

Sometimes, she adds, there are surprise guests.

"I've bumped into like a moose mom six feet away from me that I could have walked under, she was so big, with her two calves. And I've seen porcupine and I've seen all the deer and the elk and the wolves and the coyotes. And, so when you're out there and you're just seeing all this wildlife everywhere, you become very appreciative of nature right in our backyard."

Despite mental and physical benefits of the extreme endurance workouts, Savard says the best part is making friends along the way.

"One of the things I love is we don't even know what everybody does for a living," Savard says.

"My 14-year-old daughter runs with us now and she's one of our coaches. So some of her friends are 53-years-old and other ones 25. And nobody talks about who earns what or who does what for living or what's your age."

"I think that's what community was always meant to look like. It's supposed to be just a collection of people that are like-minded, not necessarily the same age or the same job. So it takes away all those barriers of how we divide up society."

This report by The Canadian Press was first published Nov. 22, 2020.