Banish the dark: walk into a winter wonderland 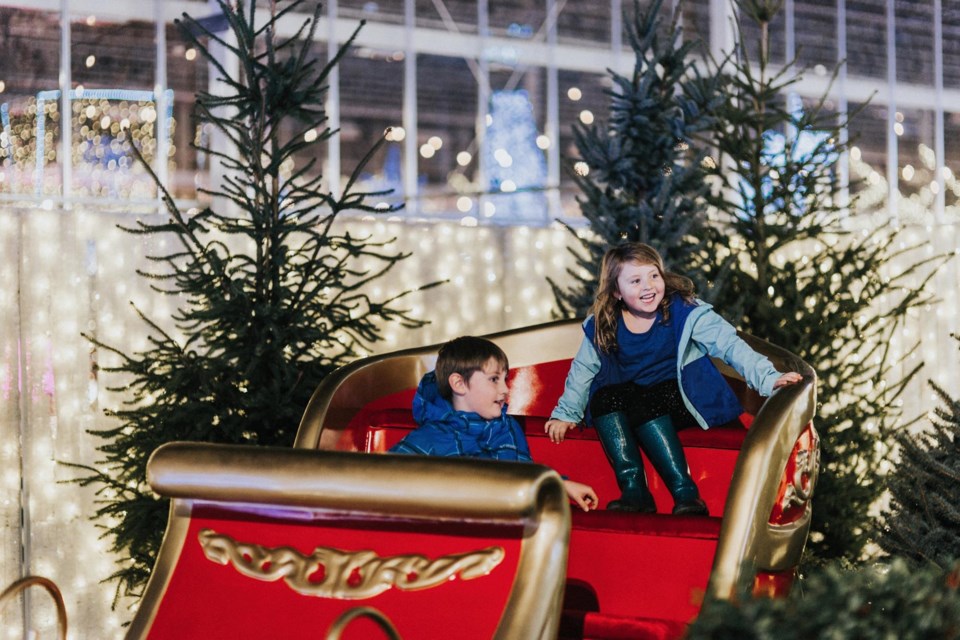 The Glow Christmas Festival, opening at Edmonton Expo Centre on Nov. 28, is designed for both little kids and kids at heart.

Prior to COVID-19, the Festival of Trees marked the unofficial start to the region’s winter Christmas season. But in this pandemic year, Christmas Glow Edmonton leads in embracing the holiday spirit.

After a 10-day delayed start due to the pandemic, Christmas Glow launches live in-person on Saturday, Nov. 28, at the Edmonton Expo Centre. It’s this year’s winter wonderland where visitors can banish the blues under a canopy of more than 1 million twinkling lights and illuminated sculptural exhibits.

Conscious of Alberta Health Services strict spacing regulations, she has rented two Expo Centre halls instead of one. Visitors will have the opportunity to explore nearly 100,000 square feet of family friendly sculptural exhibits and a Christmas market.

This year’s theme is Santa’s Sleigh Transportation Adventure. Blending the concept of transportation through the ages with the magic of Christmas, organizers have created a scavenger hunt that takes players to every nook and cranny.

“In our story, Santa has crashed his sleigh and the reindeer have scattered. The elves are trying to figure out how to deliver the presents on whatever they can find – airplanes, trains, hot air balloons and even a motorcycle,” said Van Norman.

Children taking part in the scavenger hunt must find the reindeer and Santa, their fearless leader. At each stop, children's card will be stamped. If they locate the entire missing crew, each child will receive a small gift.

Glow Festival was initially started at the Langley, B.C., Darvondra Greenhouse Nurseries owned by the entrepreneurial Jansen family. The Jansens decided to use their greenhouses’ empty spaces in winter to host a seasonal light show in 2017.

It was a huge success, and by 2018, the Jansen family exported Glow to St. Albert’s Enjoy Centre where it remained for one season before moving to Edmonton Expo Centre the following year.

Van Norman was initially hired as the St. Albert events general manager and liaison. By 2019, she received a promotion and was planning both the Edmonton and Saskatoon Glow festivals. Forming a financial partnership was simply a natural progression of Glow’s success.

“I became friends with the owners. We would often find ourselves in the same places at the same time and we discussed ownership,” Van Norman said. “Besides. It gets in your blood. It’s such a fun show. Glow attracts great people and you see the happiness in their faces. You fall in love with it.”

In addition to transportation-themed sculptural exhibits, visitors can expect to see jumbo Christmas ornaments, trees, animals, snowflakes, carriages and walk-through presents. And yes, a lighted tunnel with more than 50,000 winking lights is back. This year, it is 180 feet long, the lengthiest one yet.

“People love to walk through the tunnel. It’s in Hall C and it almost takes up the whole length of the hall.”

Due to COVID, several high touch features have been eliminated and replaced by no-touch attractions. Organizers have instead incorporated selfie walls and illusion booths, a couple of trendy variations popular in the Los Angeles area.

“We have five different selfie walls with graphics and they’re no touch. One is set up with angel wings and a halo. If you back up to the wall, it looks like angels are coming out of the wall and you’re wearing a halo.”

In a different illusion, a massive stack of presents appears from the ceiling. If you go under and look down, it looks like you’ve done some extreme Christmas shopping and carrying a stack of presents.”

And yes, a dancing Santa returns with a team of elves to listen to children’s wishes. But this year, Plexiglas and lots of sanitizing will make the experience slightly different.

Glow is not just for children. The sparkling venue also attracts many duos for date night. Much to the surprise of organizers, romantic couples are selecting the venue for marriage proposals.

“Last year we had more than 30 proposals. And that was just the people we heard about. We even had one wedding. We blocked off part of the love display. The couple got married there. It was a good photo op for them and for other people.”

Another heavily visited area is Merry Makers Market. It supports more than 40 vendors including artisans, crafters, wineries and microbreweries. Seven licensed food trucks and bars will be open during festivities.

A COVID compliance officer will be onsite throughout Glow taking every guest’s temperature and making sure everyone wears a mask. About 50 sanitizer stations will be staggered throughout the two halls.

Glow operates every week Wednesday to Sunday from Nov. 28 to Jan. 3. Visitors can purchase tickets for staggered times. Tickets are available at glowyeg.ca.