From farm, to bus, to you: a market on wheels

The first time you step on Andrew Lineker’s bus, you expect to see a driver and a few passengers trying to get to work or home. But instead, the CD Fresh X-Press is filled with the sights and smells of fresh produce.
May 30, 2018 12:00 PM By: Terry Jorden 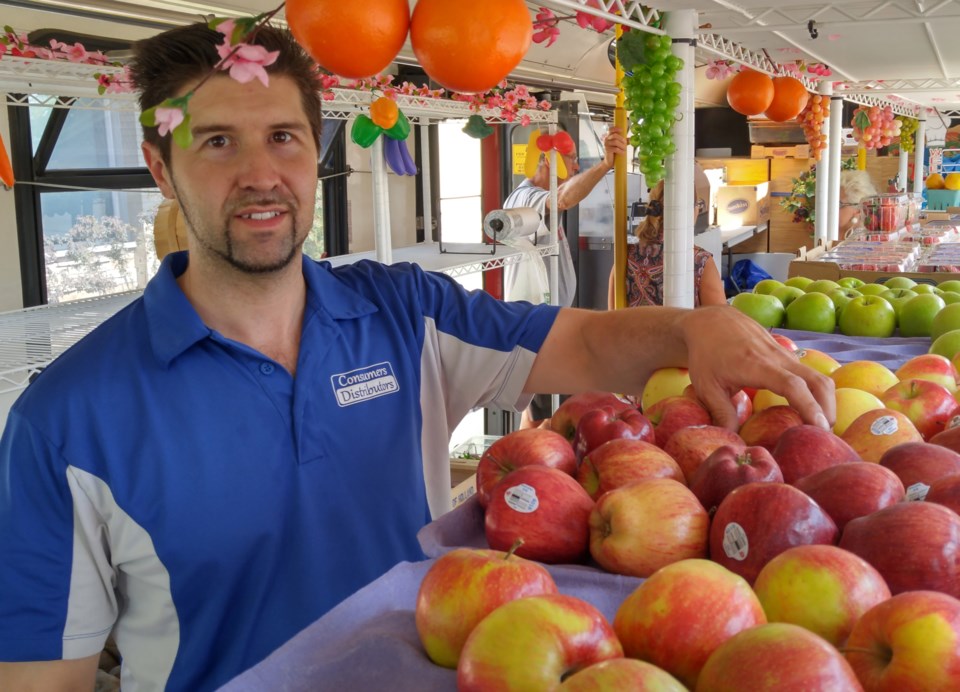 The first time you step on Andrew Lineker’s bus, you expect to see a driver and a few passengers trying to get to work or home.
But instead, the CD Fresh X-Press is filled with the sights and smells of fresh produce. The seats have been removed and replaced with shelves filled with apples, strawberries, onions, cabbage, peppers, beets and even some baked goods.
Andrew, 39, and his wife Wendy, started offering the service in February and ever since his phone has been ringing off the hook.
After years of working in the backrooms of provincial politics in constituency offices, in the legislative caucus and as an executive assistant to a former Alberta Liberal leader, and then working in the transportation industry, Andrew decided he would try self-employment by setting up a table at several 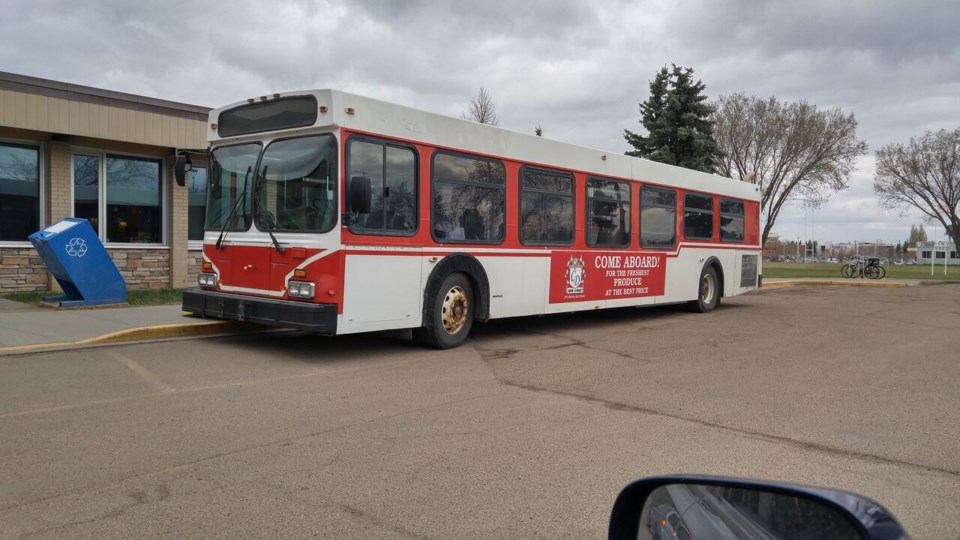 farmers’ markets.
At first, he sold some honey-based products like lip balm, lotions and later salt water taffy. Around this time, he started to get to know some local farmers who were having trouble getting into local farmers’ markets. They suggested that they would sell their products to Lineker if he had a way to sell to his customers.
After seeing a YouTube video about a bus in the US that was selling fresh produce, Andrew thought he would try out the idea in Edmonton.
He decided he would focus on serving seniors because he remembered how his grandparents would talk about the days when milk, or bread or ice would be delivered to the door. Lineker also knew there were parts of the city that were “food deserts”, where access to fresh produce was limited or non-existent.
“I know that mobility is an issue for seniors,” he says. “I know that seniors are on a fixed income and I know that a lot of businesses are going internet based, and I don’t think that the majority of seniors want to do that.”
He also knows that seniors want to get out of the house, talk to the merchant and personally pick out their own fruits and vegetables.
“And they want the freshness, and I deliver all of those,” Lineker says.
Back in mid-December he took the leap of faith and bought an old New Flyer low floor bus from Red Deer Transit. Then came the job of overcoming various bureaucratic obstacles such as provincial motor vehicle registration and inspections, provincial health regulations, insurance issues and a city business licence.
“One of the issues I am facing right now is government regulations,” says Lineker. “I don’t fit into a particular category. I am not a food truck, or a convenience store and I am not a farmers’ market.”
When the bus hit the road for the first time in early-February he knew he was on to something. The first place he tried was Pleasantview Place, a GEF seniors residence near Southgate Shopping Centre.
There was a line-up outside the bus and down the street.
“It was colder than I anticipated,” he says. “So, we had to keep the bus running and the doors closed. I honestly had no idea there would be such a demand. We served about 158 people in one hour the first day.”
Since then the CD Fresh X-Press bus has weekly scheduled stops at other places like Montgomery Legion Place, Central Lions Seniors Centre, Matheson Seniors Residence, Shepherds Care Kensington, Rosslyn Place Lodge, Touchmark at Wedgewood and even some local west end businesses and community events and festivals.
During a recent stop at the Central Lions Seniors Centre, one customer named Lorraine said the prices were lower than other places. This was her third visit to the bus and it was convenient because she was already at the seniors centre participating in activities.
Customer Cyndy Cameron said she didn’t know what to expect when she entered the bus for the first time.
“I was really pleasantly surprised,” she says. “It was great to see all the fruit and vegetables and to be able to engage with the person who runs it. I really enjoyed it.
Considering the current demand for his product, Lineker says he could fill three buses and he can imagine a time when he could have as many as six buses around the city. He also can imagine the idea of getting a longer articulated bus or a smaller bus for getting into places with limited parking.
Another goal is to sell only Alberta products, not an easy task considering our short growing season. Right now, like a good farmers’ market, the selection of food changes weekly as different products come into season.
Overall Lineker is very pleased with how his new business is growing. One thing that has surprised him is that the business is not just about selling fruit and vegetables. It’s about social engagement.
“I don’t regret doing this at all because I have met so many people,” he says “You can’t beat the relationships I have built with my regular customers. It’s fantastic.”

Edmonton investors poised to save historic Hangar 11 from demolition
Mar 4, 2021 5:30 AM