He shoots, he scores big time 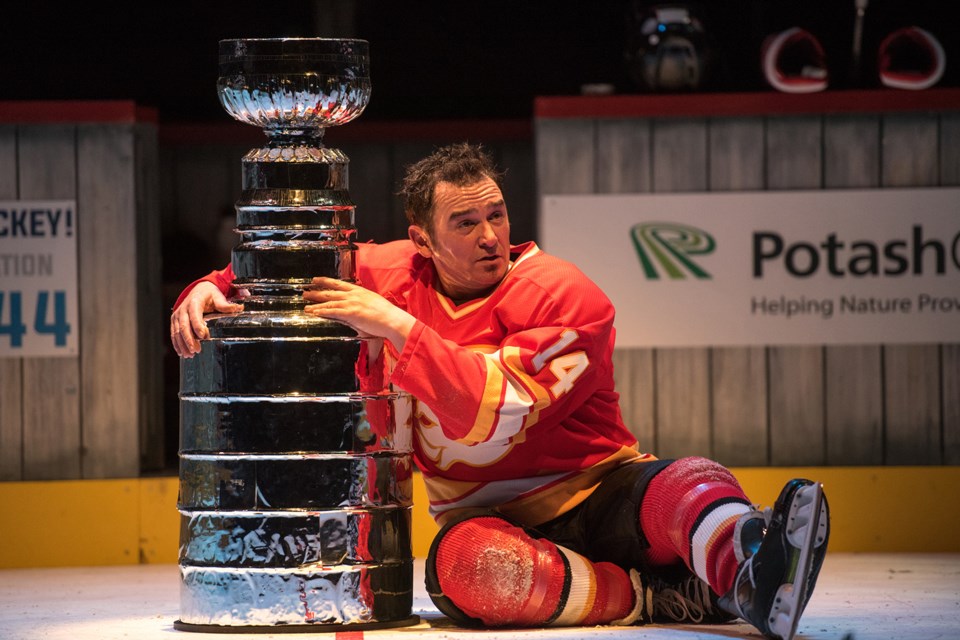 A script can make or break a production. And what a script playwright Kristie McLellan Day has written in Playing With Fire: The Theo Fleury Story.

It’s not just that this is a Canadian play about a Canadian hockey legend. Seeing Playing With Fire, now running at Mayfield Dinner Theatre until Oct. 25, creates one of those special theatrical highlights where writing, acting, direction and set design coalesce into one magical night.

Right off the bat, Fleury tells the audience he knows they are attending to hear the gossip about his roller coaster lifestyle where he spent a fortune on strippers, booze, gambling and cocaine addiction.

“I blew a $50-million career up my nose,” said an unflinching Fleury as he retells the different stages of his life from an innocent youngster who found sanctuary on ice to the angry and aggressive man that shaped a formidable destiny.

Underneath the cocky bravado, the audience sees a man who is tragically broken and cannot piece together the remnants of his life. Yet by exposing his vulnerabilities and sharing his firecracker humour, Fleury evokes our compassion and affection.

Initially we meet Fleury as a sad little boy born into small-town prairie poverty. Starved for love and attention, he lives with a bitter, alcoholic father and pill-popping, overly religious mother.

The little boy is so excited lacing on skates for the first time at a rink in an old barn covered with two sheets of curling ice. Gliding across the ice he discovers a quiet sanctuary away from his stormy family. “I found a home,” he says simply.

By 1982, a 15-year old Fleury attended the Andy Murray Hockey School where he was spotted and drafted by Graham James, a personable, well-respected coach later convicted of sexual offences against several underage players in his care.

Fleury provides only a few details of the assaults, but as a teenager entering a new phase of his sexuality they were like torpedoes exploding throughout his entire being. McLellan Day’s script doesn’t dwell on the abuse at James’ hands. Instead it focuses on Fleury’s passion for hockey, one that was both a salvation and downfall.

Standing at five-foot six-inches Fleury was one of the smallest players of his generation. But size didn’t stop him. He developed an aggressive, unpredictable physical style that often led to arena fights.

At the 1987 World Junior Ice Hockey Championships, the winger led the notorious Punch-up Piestany, a bench-clearing brawl that resulted in the disqualification of both Canada and the Soviet Union.

With a grin Fleury says, “People at last knew who I was.”

His notoriety brought him to the attention of Flames International Hockey League and he signed on for a three-year $350,000 deal with Salt Lake Golden Eagles. The money was great and lines of street drugs were even better.

“I felt like Superman,” he says describing the hits.

“I came out and hit everything in blue,” said Fleury. “I had two secret weapons – anger and tolerance for pain.

The Flames won the 1988-89 Stanley Cup and from this point on Fleury’s professional career skyrocketed while his personal life tanked from excessive partying.

At times Fleury is arrogant and puffed up. At times fragile and fragmented, or completely charming and charismatic. But always his magnetic personality sucks you in.

Much of the credit for this incredible solo performance goes to Shaun Smyth for lifting words off a page and breathing life into them. Some actors play a role. Smyth becomes Fleury.

Smyth’s talent creates layers within Fleury’s character that add dimension to the script. Whether talking about Fleury’s ice brawls or goals, his adolescent anxieties about the sexual assaults, his chaotic binges and addictions or near suicide, Smyth hits all the emotional notes flawlessly

A lesser actor might ham-handedly overplay the part. Smyth sticks to smart acting and creates a memorable role that is completely mesmerizing.

David Fraser's set is spectacular – a rink complete with synthetic ice, a net and arena boards plastered with corporate advertisements. A scoreboard hat also functions as a screen showing video clips hangs above the stage.

Smyth is spellbinding as the star. But when he laces up skates and whips across the ice scoring goal after goal for the duration of the production, it makes for a thrilling experience.

I’m not a big hockey fan. But you don’t have to be into hockey to enjoy this play. There’s definitely a lot of hockey talk, team fights, coach discussions and f-bombs.

But this is a story of a kid who just wanted to play hockey. It’s about a kid who was a victim, yet prolonged his own tragic, reckless life. It was nothing short of a a miracle he overcame his demons and reinvented himself.

The last line of the play is food for thought. “I can’t regret anything. No matter how far down you go, it’s never too late to come back.”

Anyone concerned about health risks in attending this production can put their minds at ease. Not only does the Mayfield's terraced hall divide the space. Organizers are also filling only every second table. And each table has a glass shield to safeguard patrons from unwelcome interactions.

The famous Mayfield buffet tables are gone. Replacing them is plated service and a menu listing various appetizing choices for each course. Considering the numerous health restrictions imposed on performance venues during COVID-19, this is one of the safest I've attended.

Banish the dark: walk into a winter wonderland
Nov 22, 2020 4:45 PM
Comments
We welcome your feedback and encourage you to share your thoughts. We ask that you be respectful of others and their points of view, refrain from personal attacks and stay on topic. To learn about our commenting policies and how we moderate, please read our Community Guidelines.