Walter Babiy sports a wide smile as he looks out from the players' bench between shifts at the Kinsmen Twin Arenas in south Edmonton. "I'm living the Canadian dream," says Babiy. At 85, he's the oldest player in the Vintage 55 Hockey Club.
Jan 30, 2019 11:00 AM By: Gary Poignant 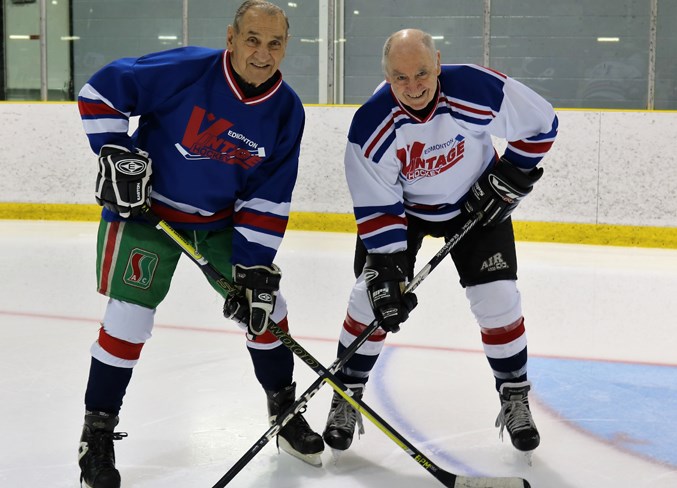 Walter Babiy sports a wide smile as he looks out from the players' bench between shifts at the Kinsmen Twin Arenas in south Edmonton.

Every Monday and Friday during the winter, Babiy takes a break from working on his farm near Cherhill, and - joined by his wife, Donna - drives 70 minutes southeast to Edmonton. They leave at 8:30 a.m. so Babiy can make the 10:45 a.m. opening faceoff.

Now in his ninth decade of hockey, Babiy has been able to extend his shinny playing career thanks to two hip replacement operations.

"I don't feel any pain while playing, due to the adrenalin," says Babiy, who admits to some discomfort afterwards.

Babiy, who has been with Vintage 55 since it began 30 yeas ago, is a former U of A Golden Bear and was also the first men's hockey coach for the NAIT Ookpiks. He plans to keep playing for as long as he's physically able.

"It is the greatest game in the world, and these are a great bunch of guys," says Babiy, who adds, "I don't really have an exercise regimen, because I work on the farm."

While there are countless remarkable stories among the 318 players in Vintage 55, another veteran player with a sky-high profile is Austin 'Aussie' Smith, also a former U of A Golden Bear and an ex-Edmonton Oil King.

When told about the Orr comparison, Smith responds, "I play pretty decently."

Smith, who switched from forward to defence after joining Vintage, was once invited to a Detroit Red Wings training camp in 1958.

"I had marriage plans so I never did go." Smith and wife, Pat, then a figure skater were married that same year.

Born in Sedgewick, Smith started playing at age four and has not missed a year. Smith said he has been injury-free during his years with Vintage.

"It's been pretty good. Lots of cuts, but no serious injuries. Just a sprained shoulder once," says Smith, who plays with a stent after a heart attack about six years ago.

Today he is on the ice two days a week in Level 3, although Tessier says "Aussie is good enough to play at any level."

"This way I can lollygaggle a bit. I have to give the extra effort in Level 2," says Smith, who regularly plays against men more than 20 years his junior.

Smith says he stays in shape by stretching and low impact exercises on non-hockey days. In the summers, he golfs.

Tessier, who has been president  for eight years, describes Vintage 55 on its website as "truly a men’s club providing a venue for the social atmosphere we all crave, creating long-lasting friendships, and of course, hockey!"

A former realtor who joined 12 years ago, Tessier says the Vintage 55 club consists of about 320 players – including 75 over the age of 70 – and another 50-plus alumni who attend most events, but don't play. The men play in four different levels – graded according to ability – on two sheets of ice every Monday, Wednesday and Friday between October and March. It has become so popular that the club – the largest senior organization of its kind in Edmonton – will add games on Thursday for the 2019-20 season.

Players can participate from three times a week to casual drop-in. And there's no shortage of netminders as 19 play regularly and a dozen other keepers are available.

Besides Babiy, about 100 men drive from outside the city to the Kinsmen arenas – including one who makes the trek from Sylvan Lake.

There are no set lineups, but rather teams formed before each game by designated captains, assigning jersey colours as players arrive at the rink. (All players carry a red jersey and a white jersey.) If one team scores five goals during the 90-minute session, the goalies switch teams and a new game begins. There is no hitting, and no slapshots.

At the end of each game, players line up and shake hands, return to the dressing rooms to change and then gather for a post-game get-together in a converted lounge in the arena lobby.

'It's male-bonding. This is their home away from home," says Tessier, adding that he volunteers his time, like the other 15 members of the club's executive.

Vintage members represent Edmonton and Alberta at outside hockey tournaments in B.C., Japan and Europe.

And they also have several local events, from hockey tourneys to a table tennis competition, named in memory of players who have passed away.

"We lose about one or two guys a year," says Tessier, adding players attend funerals wearing Vintage 55 sweaters. He said, "It's our way of remembering them."

Tessier said away from the rink, Vintage 55 players regularly participate in numerous charities, including the Festival of Trees and the Edmonton Food Bank.

"Every time we ask someone to volunteer they are always there," he says.

When asked why Vintage is so popular, Tessier replies: "Because we do it right. It is always hockey first."