MUNDARE- To find the home of Stawnichy's Mundare Sausage, drive 85 kms east of Edmonton, turn at the world's largest replica Ukrainian sausage ring, and follow your nose.
0
Oct 30, 2019 11:00 AM By: Chris Zdeb 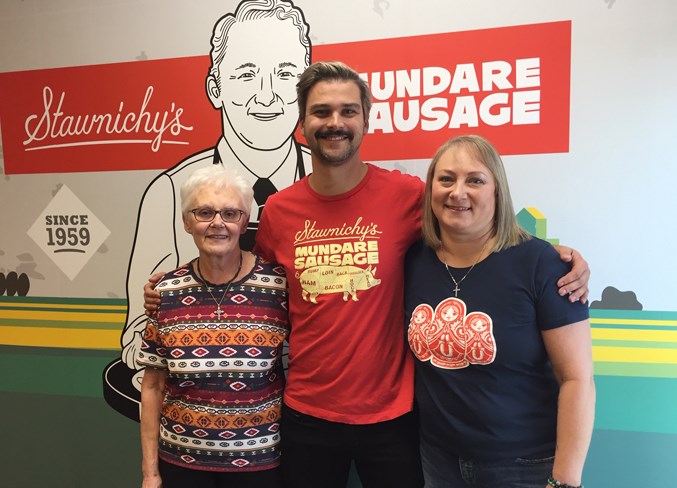 Jane Stawnichy, left, grandson Kyler Zeleny and daughter Colette Hennig stand inside the deli of Stawnichy’s Meat Processing plant in Mundare, Alta. A mural of Ed Stawnichy, Jane’s late husband, is behind them. The family-owned company is celebrating its 60th anniversary this year. Photo by Chris Zdeb

MUNDARE- To find the home of Stawnichy's Mundare Sausage, drive 85 kms east of Edmonton, turn at the world's largest replica Ukrainian sausage ring, and follow your nose. The smell of smoked meat that fills the air on main street leads right to Stawnichy's processing plant.

There, a steady stream of shoppers line up at the deli inside the front door to place their orders.

One man asks for beef jerky.

"What kind?" asks one of three women working behind the counter. "We have five different kinds," she adds, rattling off BBQ, garlic, hot & sweet, regular, and teriyaki.

The man is momentarily silenced by the unexpected choices before asking for the regular.

A large blackboard that hangs on the wall behind the counter lists many of the products available, a list that has grown to more than 80 since the company opened its doors in 1959.

Founders Woytko and Anne Stawnichy emigrated from Ukraine and opened a small country store north of town. They began selling handmade ham garlic sausage finished in a smoker, that they made for their own family, at the urging of neighbours lucky enough to try it. The ham garlic sausage is still the company's most popular meat product 60 years later.

Business boomed and the couple opened a store in town. Their son, Ed, and his wife, Jane, joined the company in 1965. Ed took over the operation in 1971 and steadily grew the business from its humble beginnings to a multimillion-dollar enterprise that operates out of a 24,000 sq. ft. production plant that has been upgraded three times.

The products basically sold themselves, says his daughter, Colette Hennig. Her dad prided himself on not having any salesmen.

"He was the salesman. Everywhere he went he would take a box or two with him and handed it out. He just promoted it himself," Hennig says.

"He was a larger-than-life character ... that you don't see very often anymore," grandson Kyler Zeleny adds.

Ed died of cancer at age 65 in 2009, but Jane and their daughters Colette and Cheryl carried on the business.

The company hired sales staff for the first time two years ago to help promote its new products. 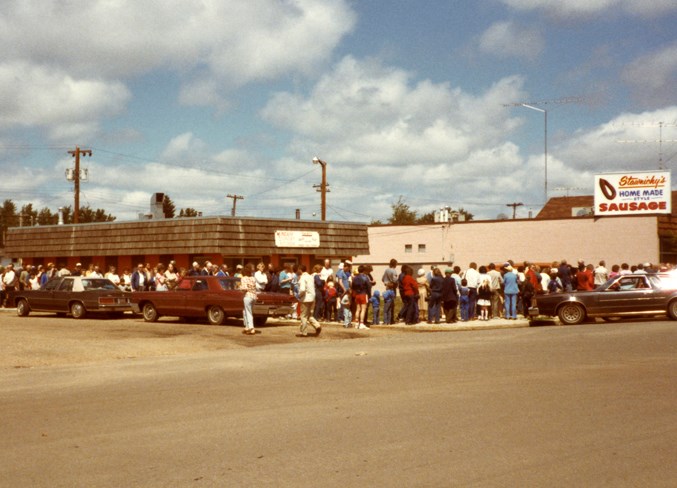 Customers lined up when the Edmonton location opened in 1971.

When Cheryl's son, Kyler, 30, joined the company as a creative consultant, he became the fourth generation of Stawnichys to help run the family business.

The company is the largest employer in the town of 850 providing work for 50 people. Another 20 work at Uncle Ed's Ukrainian Restaurant and Mundare Sausage House located on 118th Avenue at 48th Street in Edmonton. Many have been with the company for more than 20 years. About 10 of the current employees are members of the Stawnichy family.

Zeleny recently sat down with his aunt Colette to talk about the business, and the two were able to coax a reluctant Jane to join them. The front office where they gathered is located on the site of the original store.

Jane (Stefanyk) Stawnichy, 73, was married to Ed for 55 years. Ed knew the first time he saw Jane walking down the hall in junior high that she was the girl he would marry one day, Jane remembers.

"I miss him terribly, you have no idea," she says. tearing up.

Stawnichy downplays her role with the company these days. "I cash out, wash and wipe dishes ..."

"Empties the garbage – overhousekeeping," Zeleny pipes in with a smile. "You keep the place too clean."

Stawnichy walks to the plant from her nearby home and is on site from 7 a.m. to 5 p.m. six days a week – Sundays, too, when there's a baseball tournament in town.

"I have to come, I love it. It's my comfort zone," says the woman affectionately known as 'Auntie Jane' and 'Baba Jane', who greets most people by name when they come to the deli.

Hennig, 51, co-owns the company with her older sister Cheryl Zeleny. Hennig looks after the business in Edmonton, Cheryl supervises the plant in Mundare. They were six and eight years old respectively when they began working in their grandparents' store stocking shelves.

"We just kind of grew up being here," Hennig says. 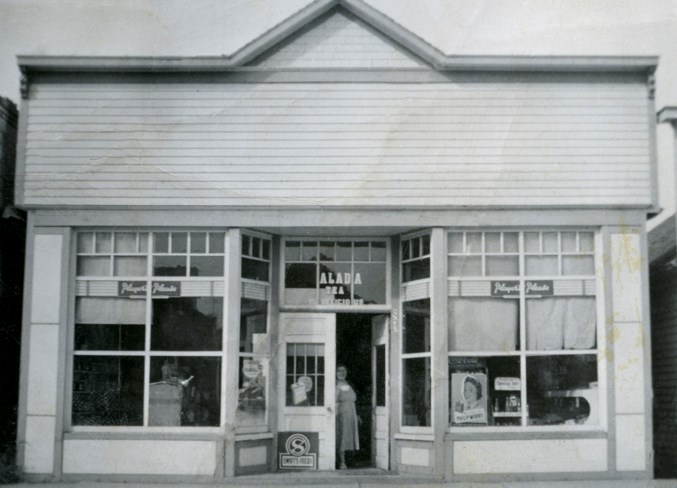 The business was like a home away from home, remembers Kyler, who was 14 when he started helping in the back feeding sausage through a vacuum-pack machine.

"If it wasn't for you kids – this generation and the grandchildren taking over, I would have had to sell," Stawnichy tells them.

The family celebrated the company's 60th anniversary in late August with a block party on main street that attracted 2,000 people, followed by a dinner for staff.

Mayor Mike Saric, who attended the festivities, lauds the Stawnichys contributions to the town.

"They're rooted in the community," he says."The girls were born here, Jane still lives in town, and they've built their business up in the town over all that time so I suspect they have a great deal of pride in the community as well. They've always been great supporters of programs and projects in the community. They're heavily invested."

Saric adds he looks forward to working with the family and Stawnichy's Meat Processing "to see them through another 60 years in our community."

There are always rumours about the family selling the business and "there are potential buyers all the time," Hennig says, "but it's not for sale.

"This is where my dad started and he was pretty proud of (the company) being in a small town. In his vision there was no plan on leaving," she says.