Jigsaw puzzles bring people together, too 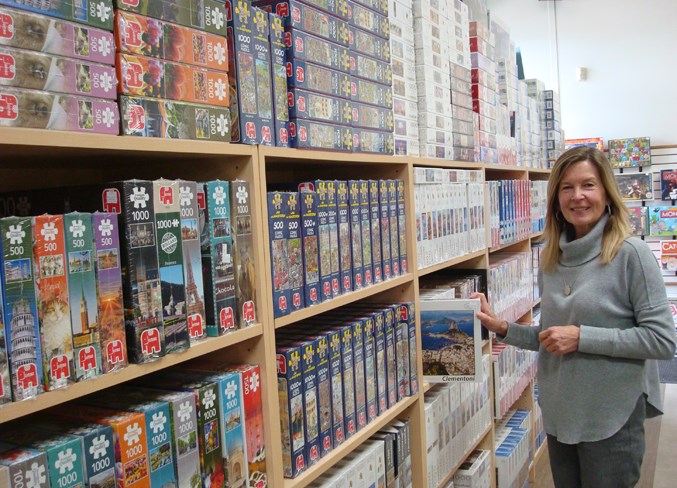 Cheryl Cameron at the 50-foot wall of jigsaw puzzles at the River City Game location at 5203 99 St . Photo by Maurice Tougas

While she doesn't remember when she first got the puzzle bug, she knows why she enjoys spending hundreds of hours immersed in the art of jigsaw puzzle solving.

"It's time-consuming, it gets your brain working and your fingers working."

They can jog your memory as well. Shukster tells of a puzzle of post cards that she particularly liked. After completing it, she thought, "Holy cow, I've been to all but six of these places."

And that's what makes a puzzle worth doing, she says – you have to like the picture.

One of the great benefits of doing puzzles is in the companionship that can come from doing a puzzle in public. Shukster lives in the Touchmark retirement community in Edmonton, and she can be found pretty much every day in the crafts room, surrounded by completed puzzles and dozens of boxed puzzles, where is she joined by friends and like-minded puzzlers. Corry Vanderspoel, 81 this month, joins her regularly.

Vanderspoel has been doing puzzles for 40 or 50 years.

"It relaxes you," she says of the appeal of the puzzle. "You're in your own world."

Today, part of the appeal is socializing, but when she was a mother of four, it was different.

"When you're in a houseful of kids, you can be in your own little room, and no one will bother you."

There is no one perfect way to complete jigsaw puzzles, but starting with the edges is a must. From there, it depends on how your brain works. Shukster says some people like to go in lines, others sort the pieces by colours, and still others, like Shukster and Vanderspoel, just scan the hundreds of pieces randomly.

They both prefer the 1,000-piece puzzles; smaller ones are not challenging enough. Only twice does Shukster remember giving up on a puzzle – one was mostly browns, another with hundreds of identical pieces of blue ocean.  Vanderspoel, too, remembers with a hint of misgivings quitting on one puzzle – again, it had a lot of water.

Jigsaw puzzles can be found at toy and book stores (even at dollar stores, if you don't mind low quality puzzles) but true puzzle people stake out River City Games.

Cheryl Cameron owns the four locations of River City Games, with help from her four grown children. She started by producing shuffleboard tables and servicing pool tables under the name River City Billiards. Around 1990, she bought a Dufferin Games Room franchise; when the chain went bust in 2000, she opened a store in Kingsway Mall called River City Games. She now has four stores under that name, the most recent opening in Sherwood Park.

Along with dozens of board games (which are enjoying a tremendous revival, she says) and billiard supplies, River City stocks an eye-popping number of jigsaw puzzles, carefully displayed on a 50-foot wall. Cameron says River City specializes in a few brands, because all jigsaw puzzles are not created equal.

What separates the top-of-the-line companies from the others is that their paper is better quality, the pieces don't peel, and "they sharpen their scissors more regularly" resulting in "clean, crisp cuts", Cameron says. Perhaps the top name in puzzles (the favourite of both Shukster and Vanderpoel) is the German company, Ravensburger. Other big players are EuroGraphics (which is particularly strong in male-centric images of race cars, planes and other manly stuff), Clementoni from Italy, and Cobble Hill from the U.S. (which frustrates some people who aren't "true puzzle people" because each piece has a unique shape, making for an exponentially greater challenge). She stocks another brand, Ceaco, only because it has a substantial following thanks to its artwork by famed 'Painter of Light' artist Thomas Kincade.

One of the store's more popular brands is the delightfully comic Jan van Haasteren out of the Netherlands, which has a huge following.

"People will phone us and ask 'how's your Jan van selection?' " Cameron says.

That company also produces her favourite line, Wasgij (jigsaw spelled backwards), which is part of her family Christmas tradition.

"Christmas Eve, this comes out," she says, admiring a Wasgij puzzle. "The goal is, we've got to get this done by New Year's."

While seniors, with more time and patience than other demographics, are big puzzle fans, jigsaw puzzles are not the exclusive preserve of the elderly. Shukster has a grandson, 26, whom she has indoctrinated into the world of jigsaw puzzle solvers. Cameron, too,  can attest to the intergenerational appeal of puzzles.

"It's the funniest thing to see my 19-year-old grandson sitting at the table for a couple of hours ... it brings us all together."