Black Talk gaining listeners from around the world as it informs and opens up conversations on anti-Black racism
Jun 11, 2021 5:00 PM By: Lucy Haines 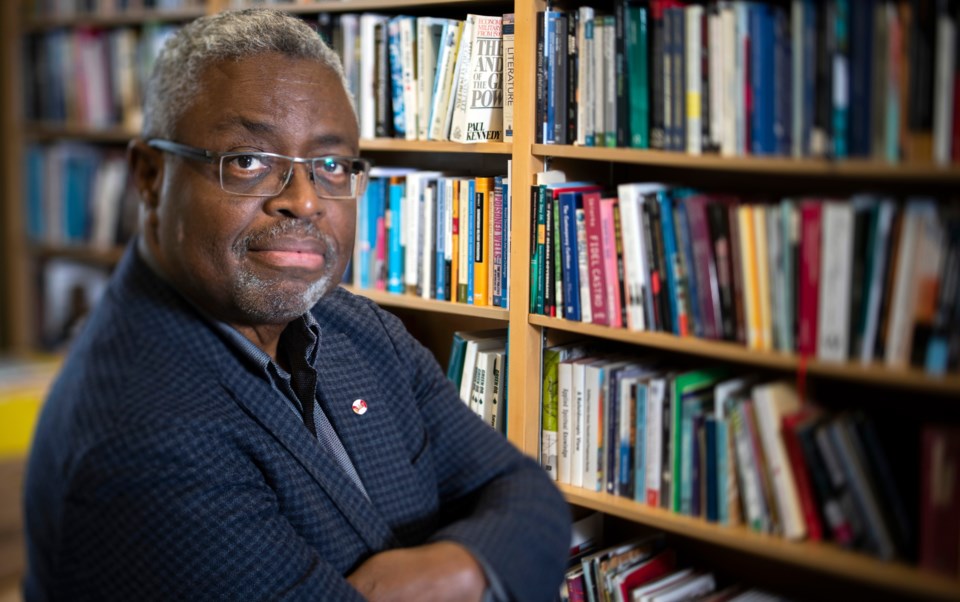 Andy Knight, U of A Political Science Professor and host of Black Talk podcast. Photo: ualberta.ca

George Floyd's murder by a white police officer last May in Minneapolis was a turning point for Andy Knight. While the long-time educator and first Black chair of the Political Science department at the University of Alberta has been speaking out on issues facing the Black community for some time, it was Floyd's murder that spurred Knight to create a podcast that could continue discussions about race, the historical roots of slavery and the concept of 'polite' or 'invisible' racism with a broader audience than he'd reach in the classroom.

"That 'George Floyd' moment spurred protests around the globe from all races, all generations. People are catching on that anti-Black racism is a burden we all bear and we all must work toward a solution--a solution without conditions--so we can all live in peace, together," said Knight.

With Black Talk, a podcast co-created and co-hosted by Knight and U of A political science student Zack Penddah, Knight hopes conversations with experts will inform and enlighten listeners about the historical legacy of anti-Black racism and why 'polite' racism is difficult to confront because of its subtle nature.

"Canada tends to be coy about racism, not overt like the U.S., but the unconscious bias that exists here is just as difficult to deal with," Knight said. "Why are there only 20 full-time tenured Black professors at the U of A, for example? Do they not want to come here? Or are they not invited? Ultimately, the podcast aims to provide a unique take on the Black experience, to challenge people's thinking and help those of all backgrounds open their eyes."

"We start our show with an eight-minute, 46-second segment on George Floyd; the length of time a police officer knelt on his neck and killed him. It's a shocking reminder of how so many people aren't even regarded as human. The personal experiences shared on the podcast and through our website show people how insidious racism is."

Guests on the first series of five podcasts include global activist Sir Hilary Beckles, who explores the link between slavery and the economy; author and journalist Cecil Foster; former MP Celina Caesar-Chavannes on her early life and her memoir Can You Hear Me Now?; U of A nursing professor Bukola Salami on how racism has affected her life and career; and Ivelaw Griffith, a former U.S. university president who addresses systemic racism and the 'celebration of whiteness' in our larger culture.

Each episode also includes a chance for local community members and students to talk about their experiences, an area Penddah, as co-host and fellow student, can relate to particularly well.  Knight says whatever the subject, the rich-with-information conversations are meant to educate, not blame.

"It's so important for people to hear someone from their own community--someone who's experienced racism and persevered and achieved," he said. "BIPOC are often marginalized and targeted. We want to deal with structural racism that is imbedded in our institutions and create a level playing field.

We would like Black Talk to initiate a discourse that will serve to educate members of the majority—conversational, not judgmental."

Knight admits he feels an enormous burden as a Black person who has achieved tenure in his field, to fuel awareness and change; to help others on their journey. "I had white mentors who literally brought me in and groomed me in what I needed to do to be promoted. We need to encourage and respect our white allies on how to navigate in our careers, but there's hope we can move beyond that; to show examples of achievement beyond the colour of our skin."

Knight said initial reaction to the first season has been positive, with listeners and institutions from around the world tuning in. Though it's a commitment of time, energy and university funds, Knight hopes to create more episodes in the fall. The podcast can be found on major platforms or online at blacktalk.ca.