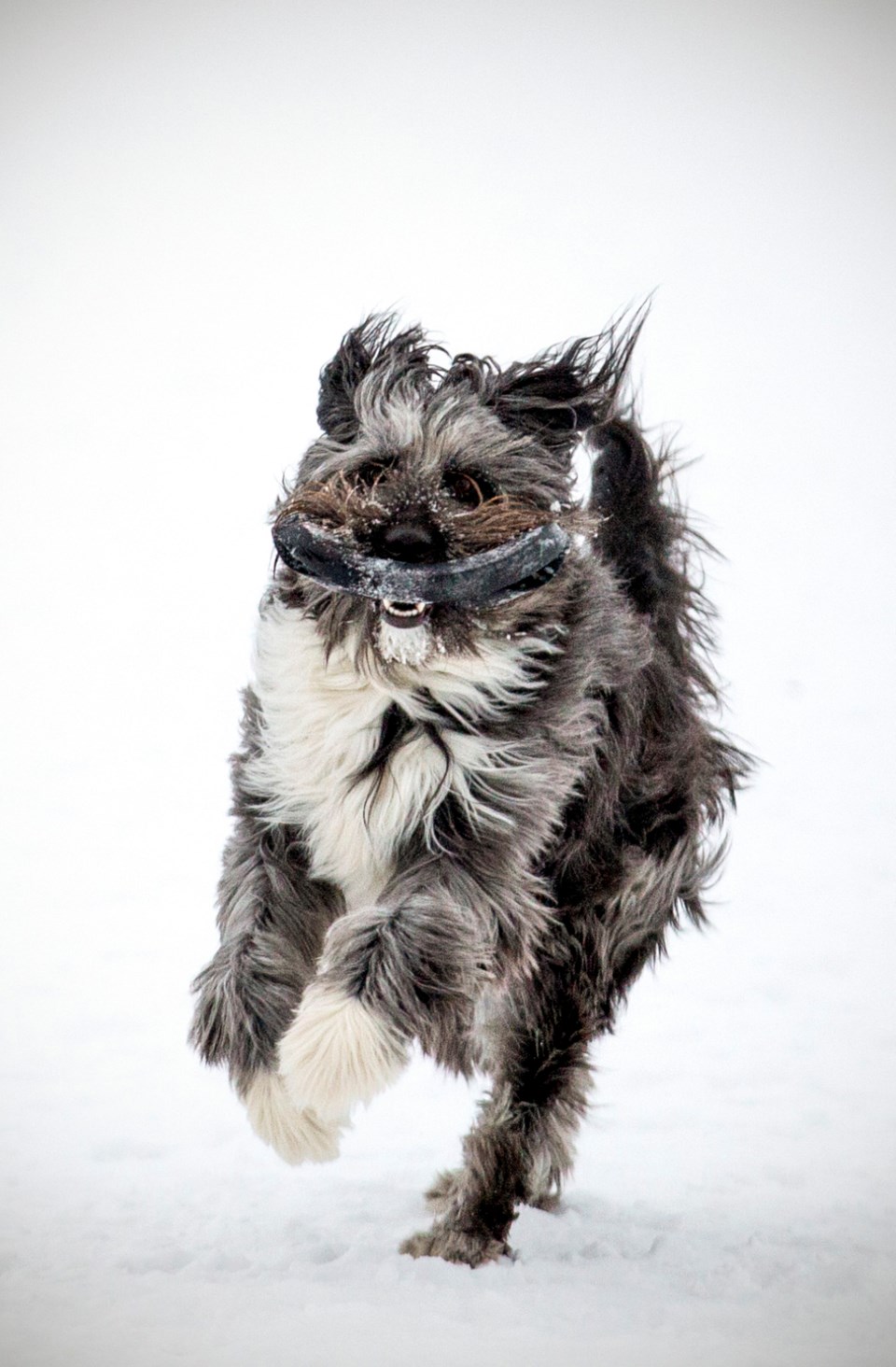 Nikita, 3, runs wildly with a frisbee in her mouth at the Lacombe dog park on Dec. 28, 2018. DAYLA LAHRING/St. Albert Gazette

Fees to own furry friends will be reduced for St. Albert seniors this year, as part of a pilot project city council narrowly approved last week.

During its Feb. 18 meeting, council voted 4-3 in favour of a motion by Coun. Ray Watkins to make dog licence fees 50 per cent off for residents over age 65, which is estimated to cost the city $32,300.

Watkins listed the myriad benefits of pet ownership on efforts such as decreasing loneliness, increasing health and providing a sense of purpose.

“Many people also find themselves struggling with purpose in life as they age; they often have fewer responsibilities and commitments, and this means structureless days,” he said. “A pet creates some routine and it brings some meaning to life for an elderly person.”

Not all members of council were supportive, and Coun. Natalie Joly spoke against the proposal, saying all dog owners should contribute to the cost of dog ownership within the city.

“Our licence fees help cover things like dog parks, education campaigns, poop pick-up contractors – which is an actual thing that we have – and municipal enforcement,” she said.

Joly also said if people cannot afford the full $38 per year licence fee, there is “no way” they can afford a dog.

While Watkins said the cost of the pilot is a “very small amount,” Mayor Cathy Heron argued these sorts of subsidization programs add up.

She also said every time council gives a break to one demographic, “we hurt financially” other people.

“At this time, I’m going to continue to be philosophically aligned with subsidizing income-based demographic,” she said.

Coun. Jacquie Hansen voted in favour of the pilot but said once city staff present a broad-scope report on all breaks St. Albert gives residents, it will help in crafting a more “holistic approach” to what council is trying to achieve.

Age is not a great determiner of need, Coun. Wes Brodhead said, and he agreed St. Albert needs to look at crafting social assistance around who really needs it.

Heron, Joly and Coun. Sheena Hughes voted against the motion.

Discounted dog licenses – excluding for dangerous dogs – will be available to seniors over 65 beginning in 2021, after validating their date of birth with city staff. St. Albert will not keep a data base of birth dates, administration said.

Cost to run the pilot is essentially an educated guess made by city staff, based on the percentage of seniors in St. Albert multiplied by the number of dog licences. City staff said they will have a true cost at the end of the pilot for offering discounted dog licences to seniors.

Ruby Olson, a resident who serves on St. Albert’s seniors advisory committee, spoke to council in support of the pilot, saying it would be “one small gesture” to improve the well-being of residents.

Watkins' motion was borne out of his participation in St. Albert’s seniors advisory committee, and he expressed frustration about the role of committees.

“I have to ask myself what is the purpose of these committees, if we’re not going to listen to what they say?” he said.

He added committees have already seen some resignations, and some people are “frustrated with the process.”

Heron said she sees the value in committees, and their role in providing advice to council.

“But advice is one thing, and we don’t have to take it all the time. I’m sure sometimes we will and sometimes we won’t,” she said.

Are health care cuts the best decision?
Apr 5, 2020 6:00 AM
Comments
We welcome your feedback and encourage you to share your thoughts on this story. We ask that you be respectful of others and their points of view, refrain from personal attacks and stay on topic. To learn about our commenting policies and how we moderate, please read our Community Guidelines.