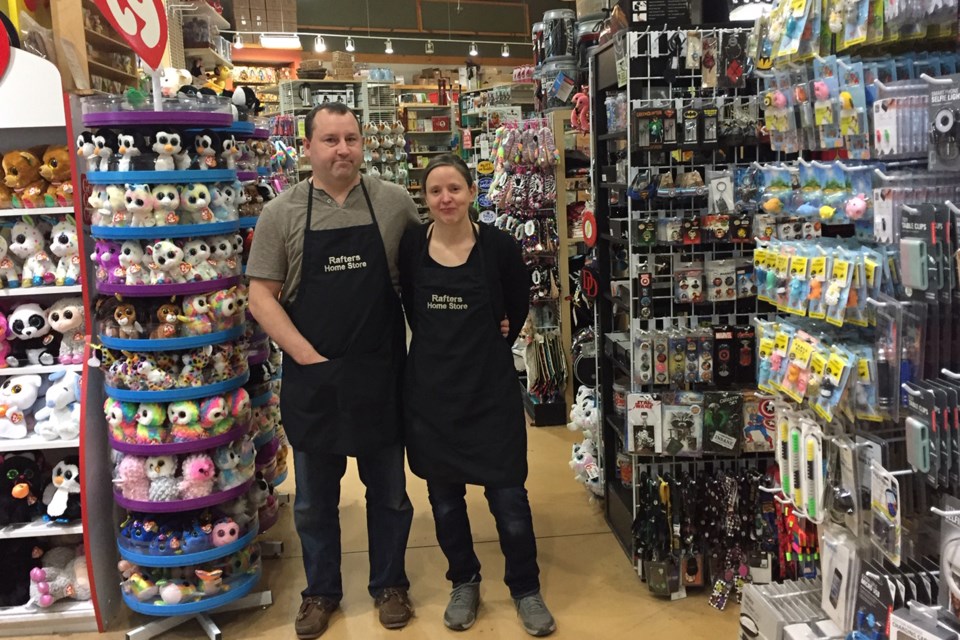 Edmonton's retail scene is about to become a little more dull, a little less interesting: the last Rafters Home Store in Canada is closing.

Whimsical bottles of hot sauce featuring caricatures of a shirtless Prime Minister Justin Trudeau making a heart with his hands and inviting users to "Use Liberally", or a hopping-mad American president Donald Trump, will be harder to find. So will all kinds of unique candy like sponge toffee and bottles of pop with pictures of such celebrities as Marilyn Monroe and The Monkees on the label.

For 15 years, Rafters in South Edmonton Common has been the go-to store for gag birthday gifts, Christmas stocking stuffers, as well as a wide selection of scented candles, home decor signs, slippers, t-shirts, kitchen gadgets and thousands of other items literally stocked to the rafters.

"It's been our dream for a long time," says Jody McAllister, 45, who co-owns the shop with business and life partner Irene Irvine, 43.
"The economy in retail has been brutal for Alberta," he notes. "You see stores closing everywhere, all industries, all types."

But it's his health - never-ending chronic nerve pain - that's forcing them to close their store.

"It's frustrating to no end," says McAllister. But his illness has put "a two-person job onto one person," adds Irvine. "It's a lot to put on Irene, handling a store this size all day then going home to do all this paperwork at night."

The couple, who met in Lloydminster, lived in Fort McMurray for awhile before moving to Edmonton in 2005.

"We wanted to actually buy a store so that's what brought us here," Irvine says.

With McAllister's retail know-how and Irvine's business accounting background, they took over the 1,500 sq.ft. Rafters franchise (part of the Panhandler Gift Store company) at the St. Albert Centre mall and moved it to its current location, which occupies 8,000 sq.ft.

There were about 15 Rafters/Panhandler Gift Shops across the country back then, but older owners gradually retired, leaving their

Rafters as the last one standing, McAlister says.

"When we first started it was more like a Brick store with mostly furniture."

That changed with the recession in 2008, Irvine says.

"People weren't pursuing those higher price points so we started looking at lower price points and more decorative items - smaller picture frames, candles. We made the switch as that point."

The store became an ecclectic grouping of all kinds of things – a little bit of country home decor, kitchen gadgets, pop culture and fashion.

"I do most of the buying," McAllister says. "Whatever I thought might sell we would try, and if it didn't sell it wasn't the end of the world; we would clear it out and try something new."

"We try to buy fun stuff because you can't really find a lot of fun, different things," Irvine notes.

"We do carry some stuff that overlaps what other companies, other stores and other businesses have, but we also have those really unique items that I don't even know if I could find anywhere else in the city or the province," McAllister says.

The store attracts people from all over Alberta, B.C. and Saskatchewan. One Saskatchewan woman came in every year before Christmas to shop for gifts.

"I think a lot of people are going to miss the nostalgia products they can't find anywhere else," Irvine says.

The couple keeps up on current events and does a lot of research looking for vendors of items that are timely like the Trudeau and Trump hot sauces.

Love him or hate him, both critics and fans of the president buy the novely item, McAllister observes.

"A lot of the stuff we sell appeals to us (personally), but we have a good sense of our customer base, so we know what they're potentially going to like and, obviously, they'll buy it.

"Sometimes picking the wrong item (to sell) turns out to be the right item," he adds, recalling a scarf order that wasn't expected to sell well.

Candy is among the store's best sellers, epecially those made in America and Japan, because they're harder to find.

But they also support local businesses, stocking such products as bath bombs made by an Edmonton woman.

Joke items, some of them inapproriate for everybody, McAllister says, is what get shoppers laughing.

"People walk through the store and you hear them chuckling and laughing at what they see. There was a lot of that before Christmas."

McAllister says it was their last Christmas running the store, which they still hope might find a buyer and remain open, as they continue to sell off their merchandise.

In a testimonial posted on the store's website, shopper Simm P. says: "I absolutely love Rafters so much. It breaks my heart to know that it will be closing down soon and I hope it doesn't."

Deborah W. posts: "This has always been a wonderful place to spend the afternoon. I can always find something unique, tons of gems. Definitely going to miss it."

McAllister says he's accepted the fact that there's nothing else they can do but go out of business.
Irvine says as hard as it is to close the store, it's time for the couple to focus on McAllister's health and on themselves.

"We're the type of people that work, work, work. We've never taken holidays, so we're going to take a week or two after closing."

Seniors to prove low-income for free bus pass
Feb 24, 2020 3:40 PM
Comments
We welcome your feedback and encourage you to share your thoughts on this story. We ask that you be respectful of others and their points of view, refrain from personal attacks and stay on topic. To learn about our commenting policies and how we moderate, please read our Community Guidelines.