If you've always wanted to do your own welding or have a welding machine gathering dust in your garage because you don't know how to use it, now's the perfect time to learn how.
Chris Zdeb Mar 29, 2019 1:21 PM

If you've always wanted to do your own welding or have a welding machine gathering dust in your garage because you don't know how to use it, now's the perfect time to learn how.

The downturn in Alberta's oil and gas industry requiring fewer industrial welders has created a void in the training sector being partially filled by eager home hobbyists or garage welders.

For example, the Garage Welding Level 1 course offered by Metro Continuing Education fills up the day the calendar of classes being offered comes out, with just as many people being turned away, says welding instructor Tedd Gunn, who teaches at the (CLAC) Christian Labour Association of Canada's training centre.

Men and women of all ages, from teachers, office workers, artists looking for a different medium, to retirees or people nearing retirement wanting a new hobby, and do-it-yourselfers who have little jobs to fix or want to build something for their yard, are signing up to learn the basics of welding.

Many come in not knowing the first thing about it and "most of them are impressed they can weld after the first night," he says. "There's a big market out there for people that want to just have the basic knowledge to do a decent job."

"People see it on TV and they want to be able to do it."

Gunn was inspired to start offering garage welding classes after meeting people who had bought a welding machine but weren't using it because they couldn't make it work.

Besides providing classes, CLAC also rents welding booths and equipment by the hour for hobbyists who don't want or can't afford to buy a welding machine. 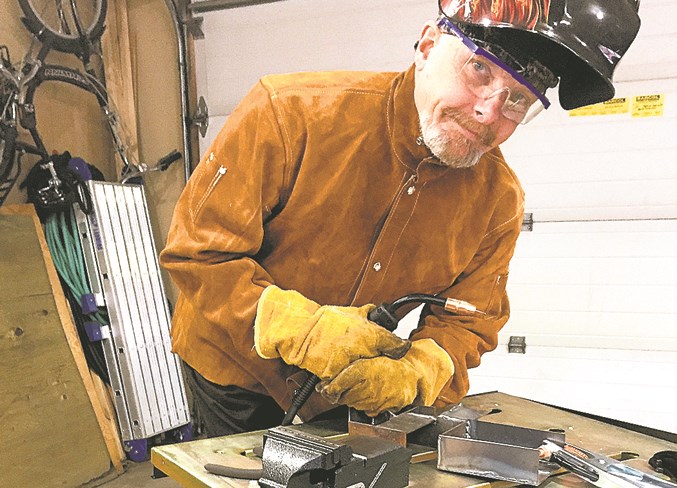 One home hobbyist who has taken Gunn's class and owns a machine is artist Keith Kobylka, 59, who uses it to make sculptures.

Welding machines are getting more user-friendly, he observes, so they can be plugged into different voltages making it easier for home hobbyists to weld in their garages.

"Also, it's pretty cool to be able to glue metal together and make it stick," Kobylka adds laughing.

Gloria Hurly, who is in her 60s, has always been around horses and loves horseshoe art. She learned how to weld last year to make her own boot racks, coffee mug holders, wine racks, even a miniature Christmas tree made of hoofwear. What started as a hobby is becoming a home business with family and friends clamouring for her art.

"My friends think it's great but initially they were kind of shocked like, "Welding?' Now they say that's really neat because horseshoe art is unusual."

When Hurly took her first class with Gunn he asked why she wanted to start welding at her age.

"I told him, basically, because it's creative, it's relaxing, it's interesting, I enjoy doing it, you feel like you're accomplishing something, and it's something you can kind of put your mark on.

"You're never too told to start welding."

Hurly's ultimate goal is to make an elaborate horse-head piece of art.

NAIT, which has seen a drop in students taking its three-year industrial welding course, also runs evening classes for home hobbyists through its continuing education program.

Three years ago the industrial welding program – the largest welding training program in the world – was filled to capacity with 2,100 students, says Chris Manning, head of the manufacturing, fabrication and maintenance department. This year the school is training 660 welders, believed to be the lowest enrolment in the history of the program. 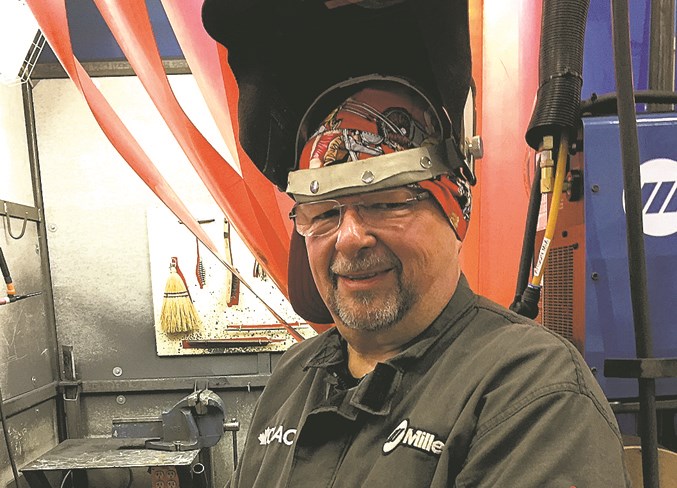 Even the number of people taking garage welding is down, he says, in part because when people have less disposable income they are less likely to take on a hobby that is not cheap.

Both Manning and Gunn think the downturn in the oil and gas industry has stabilized, but even when the demand for industrial welders returns, Gunn says garage welders won't be going anywhere.

Besides basic welding classes, Gunn is adding a Level 2 course to teach home hobbyists how to use welding related tools like grinders.

"This is going to go on. I can't stop it now even if the economy improves, because this has really taken off. There's room for both."