Plaza Bowl is more than a bowling alley; it's a time machine. Open the unassuming door on Alberta Avenue, walk down two flights of stairs and suddenly it's like you've been transported to 1959 when Plaza Bowl first opened.
Chris Zdeb Apr 3, 2019 11:00 AM

Plaza Bowl is more than a bowling alley; it's a time machine.

Open the unassuming door on Alberta Avenue, walk down two flights of stairs and suddenly it's like you've been transported to 1959 when Plaza Bowl first opened.

Owner Trevor Stride, 39, who took over the business from his dad, Terry Stride, in 2017, has added a few modern bells and whistles, but wants to keep the alley looking as traditional as it did when his grandfather Lawrence (Laurie) Stride welcomed the first bowlers 60 years ago.

"I feel like this has some real sustainability, there's such appeal to it," Trevor says. "There are some digital elements here, but it's very much not a digital experience and I think as we go further down the path that we're going I think there's going to be a huge appetite for something like this that is more tactile and physical."

Terry Stride, 74, who had run the centre for 40 years since 1977, says bowling's popularity had plateaued and he was thinking of selling the business when Trevor told him he'd like to take it over and introduce some new ideas he'd picked up working in the food industry in Vancouver.

"Trevor had a vision for the business and came in here with a whole different skill set," Terry says.

Focused on boosting bowling's social appeal, the younger Stride brought in craft beer taps, food truck food, music, the occasional night of live entertainment, and a low roller bowling league "targeting people not as serious about the bowling as they are about making sure they see their friends every week and have a nice time and maybe have a beer," he explains.

"We felt really strongly about what we were doing and we thought if we got the word out people were going to love it."

It was a strike, in the best sense of the word.

"We ended up selling out (the low roller league) and then we had a wait list, and now there's 49 teams waiting to get in. (Even the Thursday night mixed league for 35-65 year olds, although some bowlers are in their 80s, is sold out.) We didn't predict that that's for sure. I thought it was going to take longer (to be successful)." 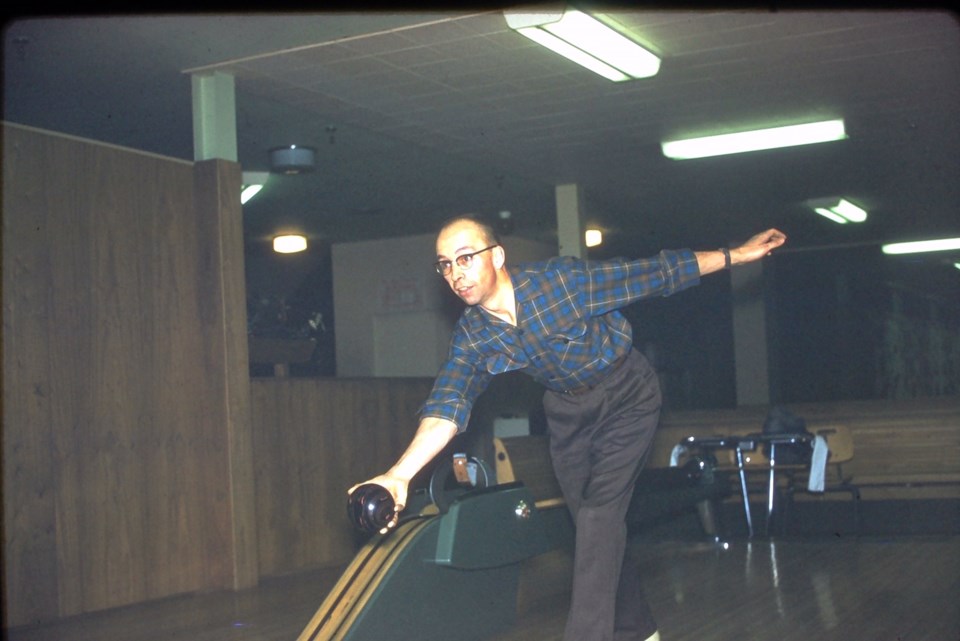 Laurie Stride in an undated photo from the 1960s.

In fact, almost every change he made was successful from the start, attracting a demographic 25 years younger than the bowlers his dad catered to.

The only flop, Stride says laughing, was bowling brunch Sundays which he'd like to try again someday.

With students from Victoria School throwing strikes, spares and a good number of gutter balls nearby, father and son recently sat reminiscing about the business Laurie Stride opened after moving from Grande Prairie. Bowling was in its rolling along then with at least 15 different alleys operating in Edmonton alone.

During the 1960s and 1970s, bowling's "Golden Age," professional bowlers were rock stars, making twice as much money as some NFL players.

Terry was 14 when Plaza Bowl opened and his first job was as a pinsetter, clearing the pin deck, manually resetting bowling pins, and sending balls back to the front of the alley.

"It was a good entry level job for students to work part-time and evenings while going to school," he says.

Automated pin setting machines were installed in 1967. They were made in Switzerland specifically for 5-pin bowling, a purely Canada game invented in Toronto in 1909 after bowlers complained the 10-pin game was too arduous.

Trevor was also 14 when he started working as a pinchaser, someone who wrangled the pins when the strings they were attached to became tangled. But he was still in diapers when his mom started bringing him to the bowling alley where she played in the women's league while attendants looked after the women's children in a nursery at the back of the building.

Bowling has always been a cyclical business, says Terry, and was at a low point – only six bowlers were registered in the senior league which had room for 64 – when he was thinking of retiring and selling the business three years ago.

It was never assumed that his son would become the third generation of Strides to run the bowling alley, but it was perfect timing, Trevor says.

"(Plaza Bowl) always meant so much to our family, that was a big factor."

He'd also been thinking of starting his own business or taking over an existing one and saw a lot of opportunity in the bowling alley. And there was the appeal of moving back to Edmonton with his wife, Correna, and daughter, Georgia, to be closer to family.

"It all seemed to line up pretty nicely timing-wise," he says.

Terry, who helped get the bowling alley ready for Trevor's takeover, says all the changes made him wonder "Holy Cow! Where's this gonna go?' but it turned out very well."

Business could still be better during the weekdays and Sunday mornings, but it's best to call ahead or go online (plazabowlingco.ca) and make a booking, they advise. Plaza Bowl is at 10418 118 Avenue.

Although adamant about keeping Plaza Bowl as traditional as possible, Stride says the wooden lanes are wearing down to the nails and will have to be covered with an acrylic in about seven years.

As for a fourth generation Stride running the business someday?

Trevor Stride says his daughter already tells him she wants to work at a bowling alley, but it's too soon to tell: Georgia's only five.