1984 is a clarion call of a sinister future 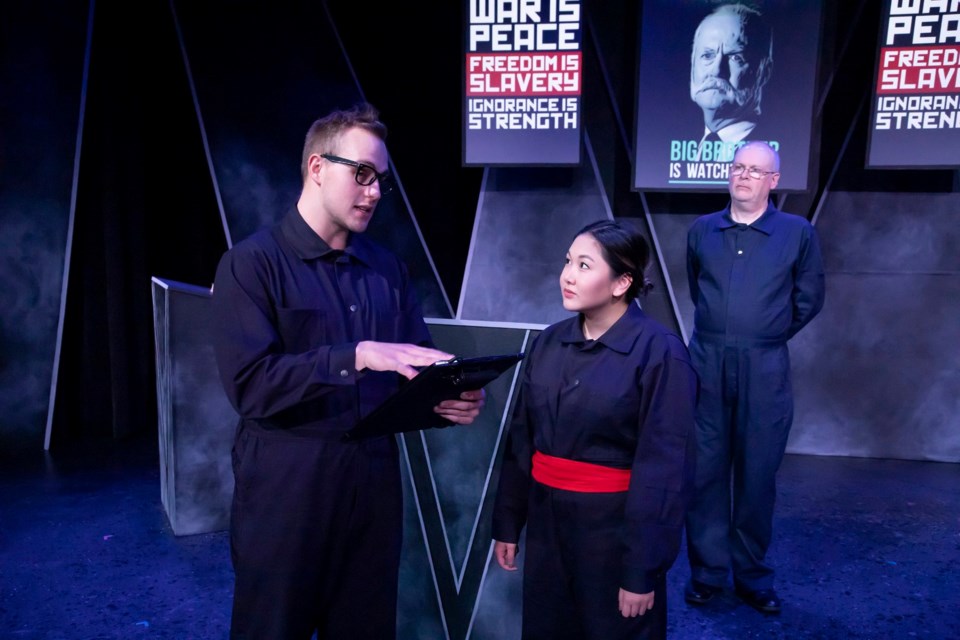 Big Brother is watching wherever you are. Creepy? That’s the world Walterdale Theatre has created with an adaptation of George Orwell’s 1984.

In Orwell’s haunting and terrifying vision of the future, the world is held in a vise of terror. It’s a world of 24-hour surveillance, systemic hatred and never-ending conflict.

He envisioned a dystopian world where pleasure was forbidden, language and history methodically destroyed or rewritten, and people vanished.

“Our political climate is edging towards it in a number of ways and we have to question the role of a single charismatic leader. The use of hate as a political tool for an agenda has increased since 2016 and it’s important to question who controls the political narrative and the facts,” said Roberts.

The story revolves around Winston Smith (Mike Anderson), a mere spoke in the colossal state of Oceania. Winston works in the Ministry of Truth and his role is to rewrite history to conform to the Party’s political agenda.

Everyone is constantly under the oppressive spying eye of Big Brother.

“Who can you trust? Your lover? Your best friend? Your neighbour? Your child? Winston is trapped in a prison without bars but with constant surveillance. Nothing is private.”

In this world stifled by distrust and violence, Winston desperately searches for love and freedom. In doing so, he becomes a rebel against the state.

One day, Winston meets Julia and they begin a covert affair. The duo rents a room above a second-hand store in the prole district where the proletariat live squalid lives.

“Julia is a strong, important tether to Winston. She stays grounded in the moment with what they have and she lives life in the moment.”

Another St. Albert actress, Anne Marie Szucs, tackles the role of Goldstein, the alleged leader of the rebellious Brotherhood. However, in true Big Brother scenario, the scenes are played out on a screen.

In this dystopian world, nothing is what it seems.

“One of the concerns I have is we must never be politically complacent in the rise of a political party unwilling to listen to contradictory ideas. We need to be vigilant and question what their end game is.”

Review: One-musician show by Ray LaMontagne on ‘MONOVISION’
Jun 24, 2020 10:01 PM
Comments
We welcome your feedback and encourage you to share your thoughts. We ask that you be respectful of others and their points of view, refrain from personal attacks and stay on topic. To learn about our commenting policies and how we moderate, please read our Community Guidelines.