The Invisible: Agents of Ungentlemanly Warfare is a Catalyst Theatre triumph
0
Feb 14, 2020 2:30 PM By: Anna Borowiecki 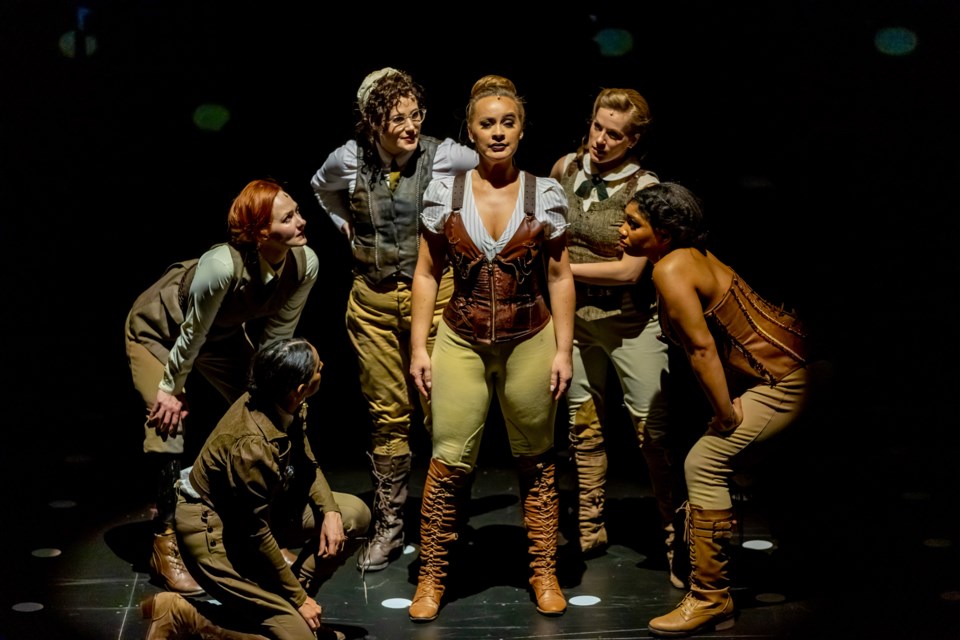 The Invisible: Agents of Ungentlemanly Warfare

As you walk into the darkened Maclab Theatre, there’s a softened rumble in the background. Is it intended to be the explosion of cannon fire you ask?

Whatever it is, the sound is persistent, non-stop and puts patrons on edge.

It’s a sign of the tautness and suspense that The Invisible: Agents of Ungentlemanly Warfare commands right from the get-go.

In the Edmonton premiere of The Invisible, Catalyst Theatre has raised its own already high bar. In my opinion, it is the strongest production the company has released to date.

Each of the seven female actors creates electric, get-up-and-go characters one is immediately drawn to while at the same time feeling great empathy for their plight.

Artistic Director Jonathan Christenson weaves a forceful story (all the more powerful because it’s true) tempered with heartfelt songs performed as solos and as exquisite harmonies.

The Invisible takes patrons to the Second World War where London appears to be losing to the Nazi war machine. British male spies are sent to France to infiltrate the Germans. However, most French men are away at war and the male spies are quickly picked off.

To blend in with the French female population, London’s Special Operations Executives (SOE) takes the drastic measure of sending female spies. Their missions are guerrilla terrorism – blow up trains and sabotage bridges.

Evelyn Ash (Melissa MacPherson), based on the real-life Vera Atkins, an assistant at SOE, is tasked with finding the spies and training them.

As Ash asks the trainees why they would be willing to lay down their life for the war, each has a passionate motive.

Dorothy (Kristi Hansen) is an educated, dominating presence often overlooked and she wishes to serve. Madeline (Tara Jackson) is a Senegalese immigrant who loves her chosen home of France and despises the war.

Anna (Marie Mahabal) is a pacifist who wishes to make the world a better place. Jacqueline (Melanie Piatocha) is a mother who wishes to avenge her husband’s death.

Betty (Amanda Trapp) is a Cree nurse raised in residential schools who is angry at the occupation of her land, and Szarlotta (Justine Westby), is a Polish resistance fighter eager to work bigger missions.

Together, the six women complete more than 29 successful missions – and then radio silence. While the SOE tries to disavow any knowledge of them, Evelyn’s conscience demands she search out her six fallen comrades.

The cast is bold, tight and multi-faceted. MacPherson delivers a commanding presence as the narrator, and Jackson gives life to one of the few light-hearted moments singing a French cabaret song with spirited abandon.

There are many cogs in this show that link together seamlessly to create a stunning and highly memorable production. They range from Bretta Gerecke’s costume, props, set, light and projection design to Laura Krewski’s choreography and Matthew Skopyk’s musical direction and sound design.

This is one production that will linger in the imagination for a long time. However, one thing bothered me. Christenson wrote this story and composed the songs as a way to ask, “Would you lay down your life for your beliefs?” As patrons filed out of the theatre virtually everyone discussed the flamboyant production design. I hope the original message was not buried underneath the bling.

What's old in TV land is new again
Feb 13, 2020 1:15 PM
Comments
We welcome your feedback and encourage you to share your thoughts on this story. We ask that you be respectful of others and their points of view, refrain from personal attacks and stay on topic. To learn about our commenting policies and how we moderate, please read our Community Guidelines.