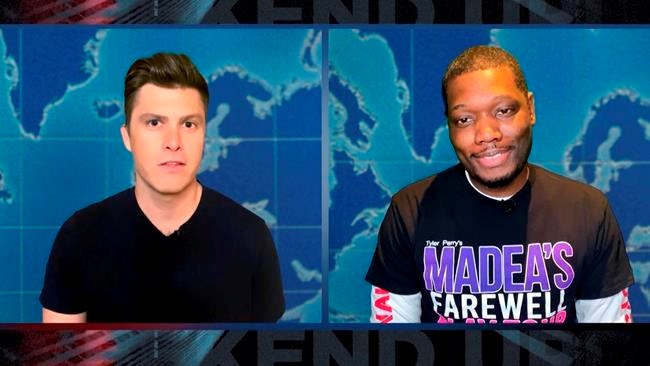 In this screengrab provided by NBC, anchors Colin Jost, left, and Michael Che appear in the Weekend Update during the second at-home episode of “Saturday Night Live,” which aired Saturday, April 25, 2020. (NBC via AP)

A bespectacled Pitt, speaking in Fauci’s raspy voice, tried to recast false assurances and misstatements pitched by President Donald Trump during the pandemic, for instance when Trump said there’d be a COVID-19 vaccine “relatively soon. ”

And now, a message from Dr. Anthony Fauci. #SNLAtHome pic.twitter.com/LYemNAWaAT

“Relatively soon is an interesting phrase. Relative to the entire history of earth? Sure, the vaccine is going to come real fast,” said Pitt’s Fauci, seated at a desk behind a stately bookcase. “But if you were going to tell a friend, ‘I’ll be over relatively soon’ and then showed up a year and a half later, well, your friend may be relatively pissed off.”

The episode was the show’s second “quarantine edition,” with pre-recorded segments at actors’ homes delving into the frustrations and touchstones of quarantine life, but, of course, with an SNL twist.

Sandler and Pete Davidson teamed up to mock being cooped up with family for a musical duet called “Stuck In The House," another sketch featured a Zoom version of “Law and Order” and another poked fun at zealous fitness moved online during the pandemic with one boasting of “eating clean” by preparing a “Clorox juice" cleanse.

Cyrus, sitting fireside with a guitar, performed Pink Floyd’s “Wish You Were Here.”

Pitt’s depiction followed a Fauci interview on CNN when he jokingly said he thought Pitt should portray him when he was asked to chose between Ben Stiller or Pitt. The cold open also featured Trump’s far-fetched statements earlier this week about disinfectant and light being studied in the fight against the virus.

“When I hear things like the virus can be cured if everyone takes the Tide Pod Challenge, I’ll be there to say, ‘Please don’t,’” said Pitt’s Fauci, before he broke character, took off his wig and paid tribute to Fauci and thanked him.

There also were jabs at Trump's battle with governors in an outdoors segment with Cecily Strong as Michigan Gov. Gretchen Whitmer, who has blasted Trump's handling of the pandemic. Strong's Whitmer urged continued social distancing.

“We’re not out of the woods yet,” she said, gesturing to her surroundings. “We never will be. We live in Michigan.”

Edmonton theatre's new and shining faces: Helen Belay
May 14, 2020 8:00 PM
Comments
We welcome your feedback and encourage you to share your thoughts. We ask that you be respectful of others and their points of view, refrain from personal attacks and stay on topic. To learn about our commenting policies and how we moderate, please read our Community Guidelines.