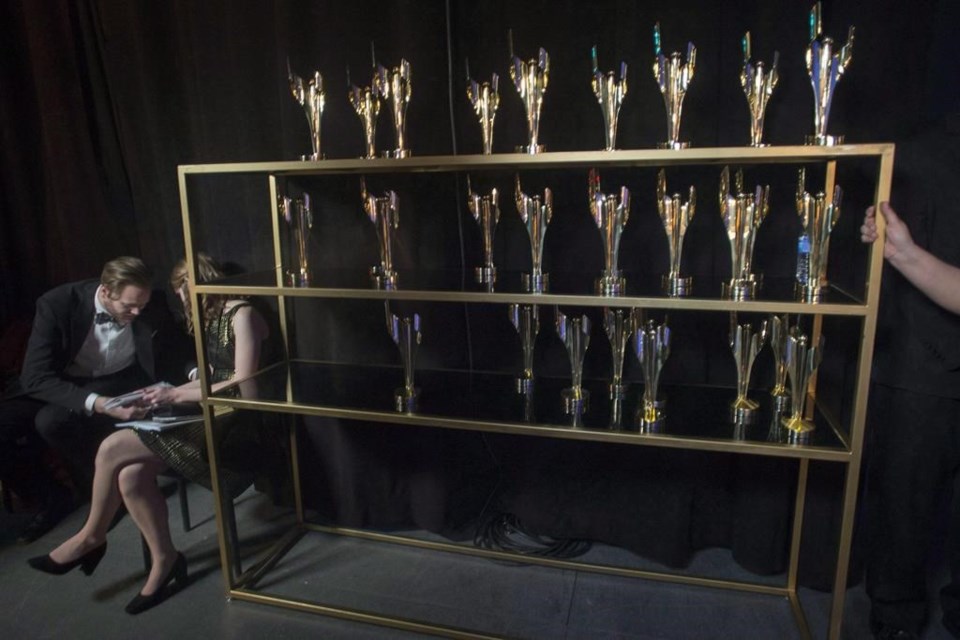 The Academy of Canadian Cinema and Television said the cancellation affects the annual broadcast gala scheduled to air from Meridian Hall on CBC on March 29 as well as all Canadian Screen Week events in Toronto, Montreal and Vancouver.

The academy said it made the decision following consultations with the CBC, a thorough review of the week-long events, and an assessment of the potential risk to its attendees.

The academy said it didn't want to contribute to the spread of the virus and put more pressure on the system, feeling it's "the only responsible decision at this time."

"It's been our decision to cancel it. It wasn't mandated by the government," Beth Janson, the academy's CEO, said Thursday in a phone interview.

"As a non-profit, I think it's safe to say that we operate on a very, very thin margin and we're very fiscally conservative with our budgets. So we don't even know what the whole impact is going to be at this point, but we felt like that couldn't be the determining factor.

"It's going to be disastrous for us, that's what I will say. (Canada Media Fund) and Telefilm have been very supportive of us and I don't feel like we'll be left out in the cold, in terms of holding the bag in terms of the financial burden of it."

Thursday's news came shortly after the organizers behind the Juno Awards, which celebrate Canadian music, scrapped this weekend's celebration at the last minute in Saskatoon because of the outbreak.

It's also another blow to Canadian filmmakers after this week's South By Southwest festival, where about a dozen homegrown projects were slated to screen, was axed last Friday over virus fears.

Canadian Screen Week was slated to run March 23 to March 29 with several galas, including the red-carpet broadcast bash.

The week of festivities also originally included a Family Fan Day meet-and-greet with stars, but the academy cancelled that earlier this week.

The hit CBC comedy series "Schitt's Creek" has a leading 26 nominations for this year's awards, which celebrate Canadian film, TV and digital media.

"Schitt's Creek" star and co-creator Daniel Levy is also among this year's special honourees, as the recipient of the Radius Award. Other special awards recipients include "Jeopardy!" host Alex Trebek, who was to appear via a pre-recorded video at the show to accept the Academy Icon Award.

Toronto actress Jean Yoon, who is up for her third Canadian Screen Award for playing matriarch Umma on the hit CBC comedy series "Kim's Convenience," applauded the academy for being so decisive so early.

"I think it's the right decision, because if you look at the trajectory of the spread of the virus, in three weeks the situation will not be good," Yoon said in a phone interview.

"I'm almost 58 and I'm kind of in that category where if I were to get it, it would not be fun at all," she added.

"And my parents are 90 and that's something I worry about."

Janson said Canadian Screen Week was expected to lure in about 7,000 attendees.

The academy is now working on issuing refunds to those who bought tickets to the March 29 gala, and figuring out a creative way to announce the winners online.

"We're all very upset, because you work eight months of the year to create this moment and so it's difficult when it has to not happen," Janson said.

"But there are more important things in the world right now, so we all understand that."

This report by The Canadian Press was first published March 12, 2020.

Tell-all book by Trump niece to be released next week
Jul 6, 2020 1:30 PM
Comments
We welcome your feedback and encourage you to share your thoughts. We ask that you be respectful of others and their points of view, refrain from personal attacks and stay on topic. To learn about our commenting policies and how we moderate, please read our Community Guidelines.