Rocker apologizes on Instagram "to any and all that took offence to" his post
May 12, 2020 8:15 AM By: Canadian Press 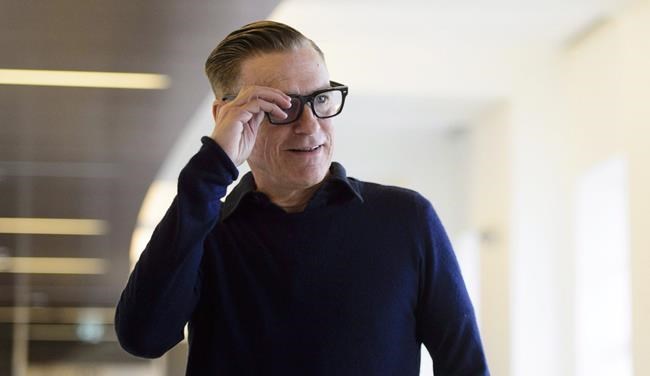 Canadian singer Bryan Adams appears as a witness at a Standing Committee on Canadian Heritage in Ottawa on Tuesday, Sept. 18, 2018. Adams is facing backlash over social media posts on the novel coronavirus that some critics are calling racist. THE CANADIAN PRESS/Sean Kilpatrick

Canadian rocker Bryan Adams apologized Tuesday for a social media post on the novel coronavirus that some critics called racist.

He said his message to those people is to "go vegan," which is a diet he's had for decades, and he decried having to cancel shows in England due to the pandemic.

On Tuesday morning, the "Summer of '69" singer issued an apology on Instagram "to any and all that took offence to" his post.

He said he just wanted to rant about "animal cruelty in the wet-markets being the possible source of the virus, and promote veganism."

He added he has "love for all people" and that his thoughts are "with everyone dealing with this pandemic around the world."

The apology post also included a video of Adams singing his single "Into the Fire."

Many on social media condemned Adams's comments as racist, saying he was contributing to anti-Chinese rhetoric surrounding the virus.

Others accused the rocker of losing sight of the true victims of a pandemic that has claimed hundreds of thousands of lives worldwide.

"It is not my intention to 'go at' or 'cancel' anyone, but to identify posts like this that condone and enable acts of hate and racism. It runs counter to everything I love about Canada," Chinese-Canadian actor Simu Liu wrote on Twitter.

"I hope Bryan does better for the millions who look up to him like I do. #BummerOf69."

Liu — star of CBC's "Kim's Convenience" and Marvel's upcoming film "Shang-Chi and the Legend of the Ten Rings" — added that he doesn't think it was Adams's "intention to promote xenophobia."

"And I know this virus has made everyone a little testy," he wrote. "I hope we can use this as an opportunity to channel positivity instead. Let's support those on the front lines. Let’s HELP."

Adams's comments come amid Asian and South Asian Heritage Month, which Liu is trying to promote on social media by spotlighting the works of notable Asian Canadians.

This report by The Canadian Press was first published on May 12, 2020.