Local health regulations have greatly reduced the number of moviegoers Cineplex can welcome at a time
Nov 13, 2020 1:45 PM By: Canadian Press 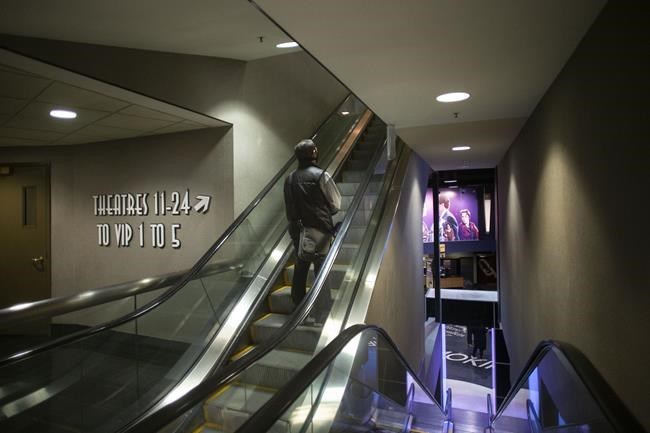 A movie goer makes his way to a theatre at a Cineplex in Toronto, on Tuesday, October 6, 2020. THE CANADIAN PRESS/Chris Young

TORONTO — Canada's largest theatre chain is trying to quell the "severe" financial impacts of COVID-19 with a more prudent approach to ventures, new private cinema rentals and reductions to expenditures.

Cineplex Inc. said Friday that it will decrease the number of new projects it pursues and continue to try to reduce real estate and payroll costs by considering the sale of its head office and using the federal government's wage subsidy program.

The measures come as the Toronto-based cinema operator released its third-quarter results, which included mounting net losses and declining revenue, sales and numbers of moviegoers.

Ellis Jacob, Cineplex's president and chief executive, promised the company would be resilient despite its recent troubles.

"We've done all the things we can to make sure we get through, and we feel strongly about the exhibition industry's ability to recover," Jacob told The Canadian Press.

Analysts expected Cineplex to lose $57.3 million or $1.31 per share, according to financial data firm Refinitiv.

The company has been rapidly trying to reverse such results, which were triggered by waning audiences amid temporary theatre closures ordered by public health officials in COVID-19 hot spots.

Cineplex efforts to stop such trends and cope with pandemic changes have included raising an extra $303 million in credit, materially reducing net cash lease outflows by about $58 million and pursuing the sale of its head office location with the potential for a leaseback transaction.

"We completed a thorough review of our rights under our lease agreements and where we thought we had attractive rights, we approached landlords to monetize some of these rights," chief financial officer Gord Nixon told analysts on a Friday call.

Cineplex has also temporarily laid off staff, slashed salaries and used $22.5 million from the government's wage subsidy plan to reduce payroll expenses to $3.9 million during the quarter, down from $40.9 million at the same time last year.

On Friday, it introduced private auditorium rentals for as low as $125.

The venture will allow up to 20 guests to enjoy a film together while distancing and will include a choice of 1,000 movies including holidays hits "the Grinch" and "Love Actually."

"We wanted to get it out there because it gives guests another opportunity and we've done it to so you can get a movie at an accessible price point, you can buy it online which makes it a lot easier and you can have a great social experience," Jacob said.

However, returning to 2019 levels of revenue is still expected to be tough.

Cineplex is still battling Cineworld, a U.K. based theatre operator that was due to buy Cineplex for $2.8 billion, through litigation.

Cineworld walked away from the deal on June 12, saying it had become aware of a material adverse effect and breaches by Cineplex, which has vehemently denied the accusations.

Meanwhile, local health regulations have greatly reduced the number of moviegoers Cineplex can welcome at a time and the chain has had to pay for increased sanitization and the costs that come with physically distancing guests and protecting staff.

Only 1.6 million people visited the movies when they were open during the quarter, down from 17.5 million in the third quarter of 2019.

In Maritime provinces, Alberta and British Columbia, Jacob said audiences have been returning to theatres faster than elsewhere and in some places where Remembrance Day was a holiday, Cineplex saw a spike in attendance.

Those who made visits have seen few of the big blockbusters originally planned for the year because studios and distributors have been pulling new releases and rescheduling them for 2021, when they hope the virus will be more contained.

Christopher Nolan's "Tenet" was one of the few new features moviegoers were treated to. Cineplex screened the film ahead of it being released to U.S. audiences — a rarity in the movie world.

One of the last major releases that has yet to be moved from this year is the sequel to "Wonder Woman," which Jacob said he has been talking to Warner Bros about.

Some believe the studio will move its release until next year. If they do, Cineplex still has other movies coming like the Toronto International Film Festival's People's Choice Award winner "Nomadland" and "News of the World" starring Tom Hanks.

"When I look at 2021, I think holy crow, I am going to be going to the movie theatre every night," Jacob said.

For those unwilling to visit a theatre during the pandemic, Cineplex has long offered home movie rentals and delivery of concession stand favourites like popcorn via Uber Eats or SkipTheDishes.

This report by The Canadian Press was first published Nov. 13, 2020.

Note to readers: This is a corrected story. A previous version stated the wrong buyer in the Cineworld deal and the wrong source of the $58 million.

Calling all eccentric millionaires: 'Schitt's Creek' motel up for sale for $2 million
Nov 28, 2020 11:45 AM
Comments
We welcome your feedback and encourage you to share your thoughts. We ask that you be respectful of others and their points of view, refrain from personal attacks and stay on topic. To learn about our commenting policies and how we moderate, please read our Community Guidelines.