Editor's note: Theatres across the province have been dark for nearly two months with productions cancelled or postponed long into the future. However, former longtime Edmonton Journal theatre critic Liz Nicholls continues to keep the love of local theatre alive on her website 12thnight.ca, which she launched in 2017. It's a site supported entirely by readers, who contribute to her Patreon campaign, and share her devotion to local theatre. Liz has given us permission to occasionally share the stories she has been working on during this undprecedented time of community lockdown made necessary by the COVID-19 pandemic. Here is the first article in a series Liz wrote profiling up-and-coming actors, which introduces us to Helen Belay, one of the news faces already, "lighting up the Edmonton theatre scene."

If you got dizzy following the zigzag of three identical briefcases through a world of espionage (and escalating chaos) in Teatro La Quindicina’s revival of Vidalia last fall, you were embroiled in a high-speed Stewart Lemoine screwball comedy set in motion by a bright, breezy, impulsive heroine with a gift of the gab.

This quick-witted meddler, stirring things up with the estimable goal of making life more, well, entertaining, was the assignment of a charismatic newcomer with a galactic smile and expert coming timing. In Helen Belay’s professional debut she slipped into the blithe literate wit of the signature Teatro style with the ease of a veteran. “Very smart!” she says of the tickling humour and the volley of ideas she found in the vintage Lemoine comedy. “Just fun! Jubilant!”

Since Belay emerged from the U of A theatre school last May — and lead roles in such Studio Theatre production as All For Love (she was Cleopatra) and Concord Floral — her name has come up regularly in conversations with directors and artistic directors across town. Edmonton audiences were the beneficiaries.

In 2020 SkirtsAfire Festival’s mainstage premiere The Blue Hour, Michele Vance Hehir’s unusually intricate coming-of-age drama, Belay was striking as a teenage girl stuck in a small prairie town iron-clad in fundamentalism, dreaming of love, music, and the big wide world. An articulate and genial conversationalist, she’s fulsome in her appreciation for the play: “a beautiful piece of writing that allows for time and contemplation … such a rich and thought-out world.”

By day, in “a bit of an overlap with a very different kind of play” (she laughs at the understatement), Belay was “in a world of chaos and godlessness!” She was in rehearsal for Theatre Network’s production of an outrageous black comedy, Colleen Murphy’s The Society For The Destitute Presents Titus Bouffonius, in which a band of misfits, played by macabre bouffon clowns, get their mitts on Shakespeare’s grisliest most gore-splattered revenge tragedy, Titus Andronicus. 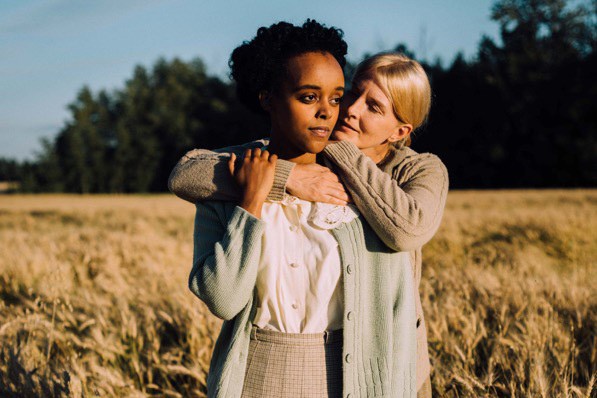 Going between the two might well be the wildest cross-hatching of the season. Belay played Aaron, a vengeful, evil-soaked plotter full of murderous malice. The audience was part of the show, acknowledged at every turn. And it was impossible to predict how an audience would react to the shocking developments onstage. “It changed from night to night,” says Belay. ” Things that would get a laugh one day got deafening silence the next.”

Belay, who’s in her early 20s, remembers thinking after the first run, “dear god, are we going to make it? We must! We have to! The show is going to open!” People laughed, or they were shocked, or offended, or some edgy hybrid of all of the above. Some walked out, she reports. “Was it improv? Absolutely,” says Belay, who had never done improv officially until a five-hour shift last fall in Die-Nasty’s annual Soap-A-Thon. “I loved it! Scary, yes. But the opposite side of the coin (from) fear is excitement….”

Bouffons don’t give two hoots about the audience liking them. Au contraire. “A few times I’d snap at an audience member so fiercely I wondered if I’d crossed the line, gone too far. It was like that for all of us!”

Goading an audience to the breaking point wasn’t anything the England-born Belay could have predicted when she was growing up in north Edmonton, the child of Ethiopian immigrants. She wasn’t a die-hard theatre kid but “a pretty hardcore academic” whose parents were, like many immigrants, keen from the outset for their offspring to salute “the holy trinity,” as she puts it cheerfully, “medicine, law, engineering.” And for a time she found herself, fretful and unhappy, in computer science at the U of A. “My heart wasn’t in it,” she says of her younger self.

On a semester off, on dad’s prescient suggestion, she tried an acting class with the Citadel’s Young Company. It was an instant life-changer. “On the train ride home, I’ll never forget, I was filled with … just an electric thrill!” Happiness is at stake, as her parents have recognized. When she was starring in Cinderella, in a new adaptation of the old tale at the Globe in Regina this past Christmas, her parents drove there, to see the show “and make sure I had people to spend Christmas with…. I’m lucky!” And lucky, too, she says, “to have so many artists I respect and admire give me a shot!”

That thrill of knowing your calling propels her forward through a summer that’s started with the indefinite postponement, three days into rehearsal, of the Citadel/Arts Club co-production of Peter Pan Goes Wrong, which would have played Edmonton and then Vancouver. She was slated to play the young niece of the assistant director, cast as one of the Lost Boys, a character who has horrific stage fright and keeps getting injured. And she still will, if her increasingly busy schedule permits when the production returns to the stage.

“OK, you choose a life in the arts, to some extent. But it very much chooses you,” says Belay. “I feel like I was grabbed by a skeletal hand and dragged toward my future!” she laughs. Meanwhile, she’s taught herself to play the ukulele and make sourdough bread.