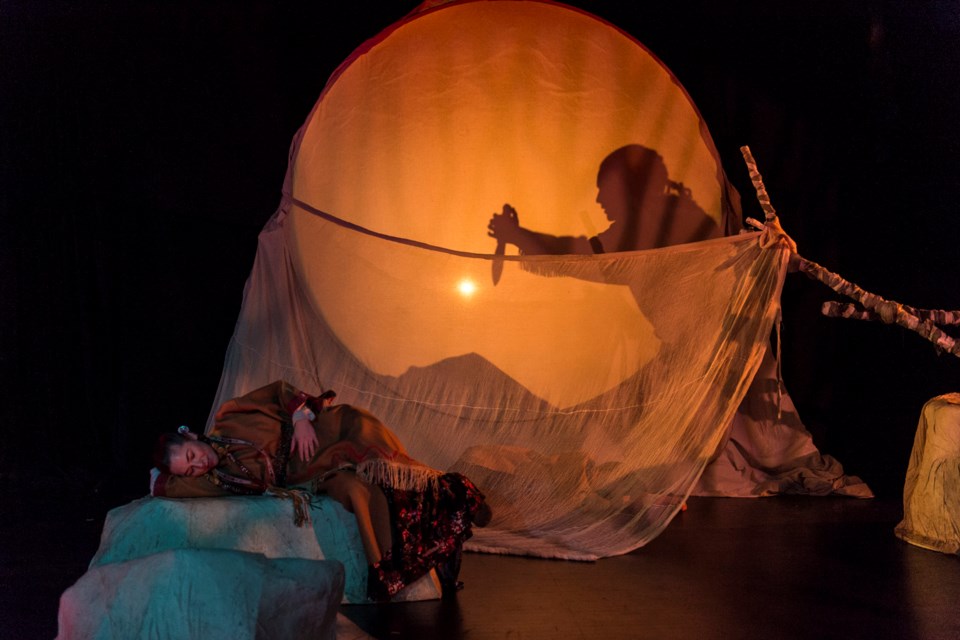 Allyson Pratt and Aaron Wells star in PAWÂKAN MACBETH, an Indigenous telling of the Macbeth tale. It takes place at the Backstage Theatre on Feb. 6 to 8. DONALD LEE/Photo

In Shakespeare’s Macbeth, the Scottish warlord and Lady Macbeth are mesmerized by the siren call of power. Too late, the couple discovers the murderous, tyrannical path to power is also their downfall.

Pawâkan Macbeth returns to Edmonton as part of Edmonton’s Chinook Series 2020, a partnership with Azimuth Theatre’s Expanse Festival. The stimulating Indigenous tragedy takes place Feb. 6 to 8 at the Backstage Theatre next to ATB Finanacial Arts Barns.

“It takes the story everyone knows and puts it into the Cree culture and uses Cree language. It’s a great gift to share the Cree language in a story people know. It’s also beautiful as actors play animals. It’s spooky too. But there is humour. It goes from light to dark, and spooky to balanced. It’s a beautiful emotional journey,” said actress Allyson Pratt.

A member of Alexander Cree Nation, Pratt, now based out of Toronto, was tapped to play the lead female role of Kâwanihota Iskwew (Lady Macbeth).

For about 100 years, the two Indigenous nations had fought a war with Blackfoot over territory, food, supplies and trade.

The Canadian government was pushing westward and grabbing land. The harsh environment’s neverending uncertainty and fear of starvation woke up the darkest of Cree spirits, the many-fanged Wihtiko, an evil cannibal being with an insatiable hunger.

In this tale of love, greed, ambition, honour and betrayal, Macikosisân (Macbeth), a great Okihcitâw warrior plots with Kâwanihota Iskwew (Lady Macbeth) to kill Chief Okimâw Wipâstim (Duncan), a leader who seeks to unify the nations.

Pratt’s Kâwanihota Iskwew (Lady Macbeth) is a complex character, a woman as easily capable of inciting violence as nurturing her baby.

“She inhabits the spirit and convinces her husband into murdering the current chief,” said Pratt.

Even as the bloodshed and violence feeds imbalance into the community, she notes the Howlers stimulate regeneration.

“The Howlers melt her heart. Her icy heart is what gives impetus to the wrongdoings. When her heart melts, she realizes what she’s done. She goes from being a powerful woman to a shell of a human."

Macikosisân (Aaron Wells) also undergoes a transformation from a respected warrior to a tyrant devoured by his covetousness, greed and cannibalistic appetite.

And of course, the three witches who prophesize Macbeth’s eventual downfall are in Arluk’s tale as three wry trickster figures.

Pratt, who has played Kâwanihota Iskwew in several productions across the country since 2017, notes the play is about the universal struggles people face.

“The choices we make can put us at odds with our community and disrupt the balance. It is necessary to have a balance of light and dark, but if darkness overtakes the light, we need to right the balance.”

Pawâkan Macbeth is paced with 25 to 30 colourful characters that include people, animals and spirits.

“I invite you to the Indigenous telling of this story. It’s a very powerful story for both Indigenous and non-Indigenous people. At the end of the day, we’re all in this together.”

Catalyst Theatre puts on an unforgettable performance
Feb 14, 2020 2:30 PM
Comments
We welcome your feedback and encourage you to share your thoughts on this story. We ask that you be respectful of others and their points of view, refrain from personal attacks and stay on topic. To learn about our commenting policies and how we moderate, please read our Community Guidelines.