All four leads in the Canadian series — Eugene Levy, Catherine O'Hara, Daniel Levy and Annie Murphy — are nominated for their performances
Jul 28, 2020 9:15 AM By: Canadian Press 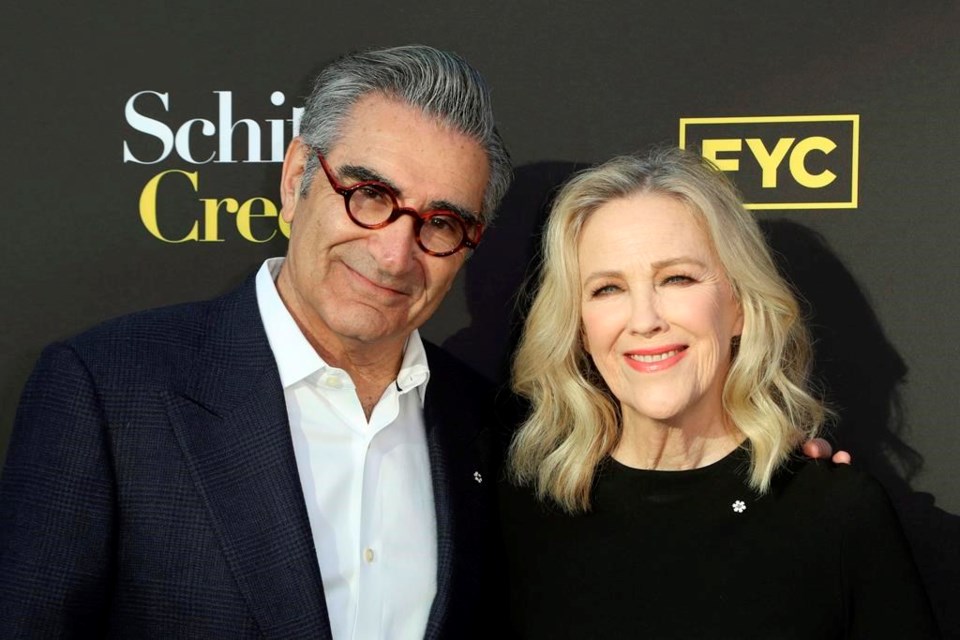 Eugene Levy, left, and Catherine O'Hara arrive at the "Schitt's Creek" FYC Event at the Saban Media Center at the Television Academy on Thursday, May 30, 2019, in Los Angeles. "Schitt's Creek'' stars Levy and O'Hara have each been nominated for an Emmy Award for their leading roles in the comedy series. THE CANADIAN PRESS/AP-Photo by Willy Sanjuan/Invision/AP

All four leads in the Canadian comedy series — Eugene Levy, Catherine O'Hara, Daniel Levy and Annie Murphy — are nominated for their performances.

Daniel Levy, who co-created the series with dad Eugene, is also a contender in the categories of directing and writing in a comedy series.

Together, they play the Roses, who live in a motel in a small town after losing their fortune.

The Ontario-shot CBC show, which airs on Pop TV in the U.S., is also nominated for best comedy.

Other Canadian Emmy nominees this year include Ottawa-raised Sandra Oh for lead actress in a drama series for "Killing Eve," which airs on CTV Drama Channel and Crave in Canada, and BBC America.

She plays a determined MI5 operative caught up in a mind game with a female assassin, played by Jodie Comer, who is also nominated in the same category this year.

"Full Frontal with Samantha Bee," hosted by the titular Toronto-born comedian, is up for best variety talk series.

Hamilton-born Luke Kirby for guest actor in a comedy series for "The Marvelous Mrs. Maisel."

Montreal native Antoni Porowski, who offers cooking advice in the inspirational Netflix lifestyle series "Queer Eye," is nominated for host in a reality program as part of a group with the fab five.

Another Canadian contender in that category is entrepreneur Kevin O'Leary along with the other sharks in the business-pitch series "Shark Tank."

Meanwhile, Martin Short's ostentatious role in the Apple TV Plus series "The Morning Show" is recognized with a guest actor in a drama series nomination.

This report by The Canadian Press was first published July 28, 2020.

Film Fest celebrates aging and accomplishments of older adults
Oct 20, 2020 9:01 PM
Comments
We welcome your feedback and encourage you to share your thoughts. We ask that you be respectful of others and their points of view, refrain from personal attacks and stay on topic. To learn about our commenting policies and how we moderate, please read our Community Guidelines.