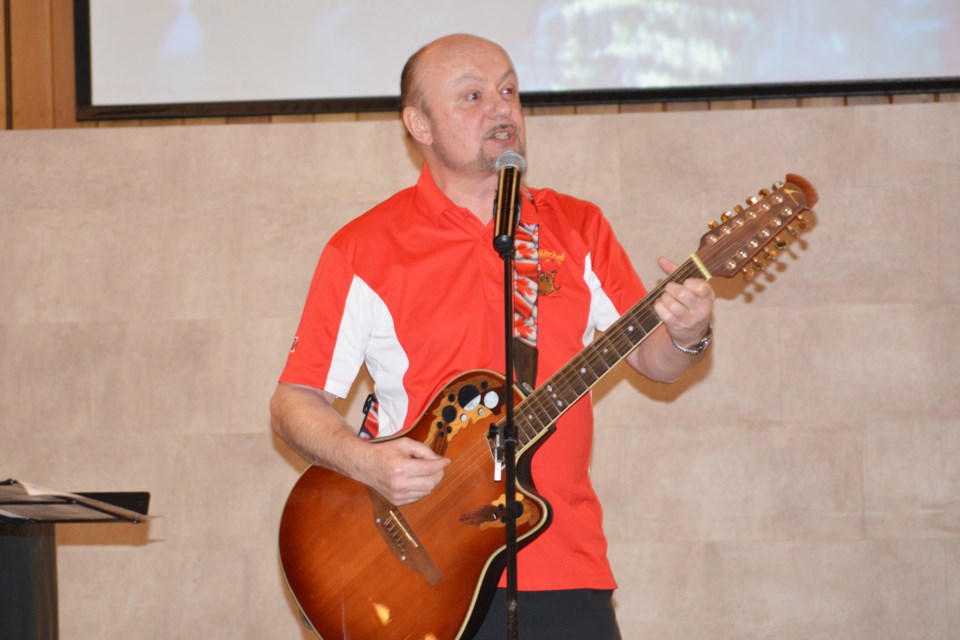 Canadian singer-songwriter, Michael Mitchell performs a traditional folk song during his Canada Is For Kids concert at the Innisfail United Church on Jan. 30. Kristine Jean/MVP Staff

INNISFAIL – Michael Mitchell has shared his love for Canada through music for more than 30 years.

The Canadian singer-songwriter made a visit to Innisfail on Jan. 30 as part of the Innisfail United Church’s concert series.

He is one of several artists performing at the church over the next several months to help raise funds for the Innisfail United Church’s new renovated space and sound system.

"There's not much of the country I haven't seen. That's what I sing about. I just love the country," said Mitchell.

Originally from Montreal, Mitchell now lives with his wife in British Columbia. He spent 18 years in the Canadian military, which is when he developed his great love and pride for Canada.

"That allowed me to first of all start travelling across the country but also to experience what made it special," he said, noting when he left the military he decided on a career singing and writing songs.

"I wanted to sing about something that was important to me and the country was," he added, noting about one-third of the songs he sang during the concert were original, while some were contemporary and others traditional folk songs, which he sang in both English and French.

"I go to 150 schools a year all across the country and interspersed with those are sometimes evening shows like this, or festivals for the family to join in on," said Mitchell, adding he’s produced six CDs over his career. His first CD was a tribute to his military friends and former colleagues. That was later followed by three children's CDs entitled Canada Is For Kids, Volumes 1, 2 and 3, which he featured in his Innisfail concert on Jan. 30.

"The Canada Is For Kids collection is the latest (work)," he said. "It started in the '80s and that was mostly a collection of traditional songs, but then the more I travelled the more I thought, there's something missing. So I just started writing my own songs about places I was visiting, people I was meeting and uniquely Canadian experiences."

That Canadian spirit is something Mitchell shares with his audience at every concert.

“Every one of these songs tells a story about Canada," said Mitchell.

“I want to share some of the many, many things that are unique to Canada and Canadians, and to draw a little bit of pride out of them when they join in and sing or listen to a story that makes them remember something about why they think Canada is such a great place to live,” Mitchell concluded.

Catalyst Theatre puts on an unforgettable performance
Feb 14, 2020 2:30 PM
Comments
We welcome your feedback and encourage you to share your thoughts on this story. We ask that you be respectful of others and their points of view, refrain from personal attacks and stay on topic. To learn about our commenting policies and how we moderate, please read our Community Guidelines.