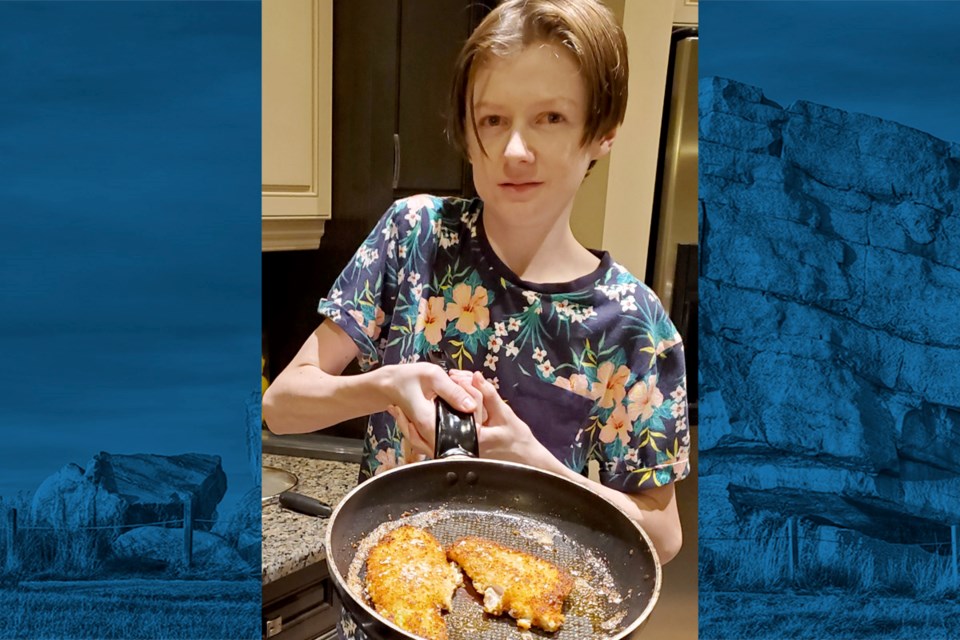 A cooking student’s recipe has received a thumb’s up from a well-known hard-to-please chef.

“That was really cool,” Haverko said. “It was a life-time goal achieved. He knows my name and has recognized me at such a young age at only 15. I’m the first kid that he has dueted with on TikTok.”

Ramsay is spliced in next to Haverko’s video and he is adding comments about Haverko’s ribs.

Of course, the chef, known for his tough-love criticism, had some brickbats for Haverko as well.

“Listen to me dude, you’re a lot younger than I am, dry the ribs you’ll taste the seasoning way better,” Ramsay said.

Haverko came up with his attention-grabbing recipe after some experimentation.

“The first time I used it was on a whole chicken,” Haverko said. “Then I thought pork usually goes good with citrus and sweeter flavour, so I put it on some pork ribs.

“It turned out really good and it’s probably my favourite way to have ribs.”

He’s a chef who believes that tasty recipes should be shared, which resulted in catching Ramsay’s attention.

Haverko posts recipes almost daily, and his ribs recipe was noted by a representative from Bounty paper towels, one of Ramsay’s sponsors. The representative passed the video on to Ramsay.

Haverko’s love of cooking came from hanging around the family kitchen, not from the joy of eating. He was diagnosed at six months of age with a disease, which virtually killed his appetite.

“At a young age I couldn’t really eat a lot of solids, I had  this tube through my nose but since I was about three years old I always enjoyed being in the kitchen,” Haverko said. “I went from not eating anything at all to loving cooking and wanting to make it a career.

“I’ve learned from TV shows, the Internet, stuff like that.”

His mother, Tanya, is enjoying the fruits of Nathan’s labour.

“It’s great,” she said. “From a young age we had to nurture Nathan’s health through food. I remember people would come over and they would be nervous because Nathan would be climbing the counters, the cupboards getting spices for whatever he needed.

“Our kids have grown-up with the importance of healthy food.”

She said cooking has provided a valuable outlet for her son during the COVID-19 pandemic.

“Yesterday (Dec. 17) Nathan submitted a duck breast schnitzel – the project was a shake or a smoothy and the kid submits a duck schnitzel,” said Poile, Foothills chef educator. “I sent an email to  his parents kind of gushing – 'holy crow, you know you have something on your hands there. I don’t see this kind of thing from a Grade 10 student.'”

While Poile would like to take full credit for Haverko, that’s not the case. Haverko has only been in a handful of in-person classes this term.

“I take no ownership that Nathan’s talent has developed, but I have become his head cheerleader,” Poile said.

Haverko's long-term goal is to, first, own a food-truck and, eventually, open his own restaurant.

Below is Haverko’s rib sauce recipe:

1. Cut ribs in half then remove the membrane

2. Take the hot sauce and rub it on both sides

3. Take your rub and coat heavily on both sides

5. Make your sauce by sautéing the garlic and ginger in a pot then add all of your ingredients (listed above)

6. Bring the sauce to a boil then reduce on low until it reaches a bbq sauce consistency

7. Put your ribs on the smoker uncovered for 3 hours

8. After 3 hours wrap your ribs in tin foil and add orange juice on the bottom of the tin foil then smoke for 2 more hours

9. After 2 hours take the tin foil off and let the ribs cook for 1 more hour

10. Glaze the ribs every 20 minutes with your sauce for that last hour

11. Cut into individual ribs and enjoy