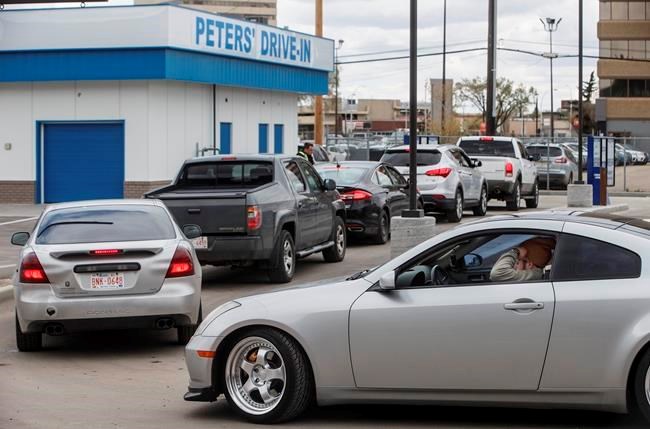 People line up to get food from Peters’ Drive-In in Edmonton on Monday, May 11, 2020. THE CANADIAN PRESS/Jason Franson

Long lines of people waiting to get into big-box and grocery stores were an early phenomenon of the COVID-19 pandemic.

Another type of queue has emerged and it's not for toilet paper.

Cars lined up for doughnuts and, more recently, for ice cream and burgers at drive-thrus have backed up traffic at various locales in Canada.

Rob Ladouceur and his wife waited in their car on three consecutive days at a new Peters' Drive-In in Edmonton for burgers, shakes and fries.

They drove away empty-handed each time.

The couple gave up the first time when cars were backed up for almost a kilometre. They were turned away the next two days because the restaurant closed before their car made it to the window.

They were oh-so-close on their third attempt.

"We'd been waiting an hour and 10 minutes and were only four or five cars back of getting in," Ladouceur said.

Peters' declined an interview request from The Canadian Press.

The novelty of a new location opening contributed to the backlog of cars, but Ladouceur believes the COVID-19 pandemic stretched the line. People weren't allowed to walk in to order, so the drive-thru was the only option.

Ladouceur suggested he, like most people, just wanted to get out and do something fun.

"And some of that is going and getting an awesome shake and a burger and some fries from Peters', right?" he said.

"It's important that people continue to follow the guidelines around physical and social distancing, but at the same time I get ... the psychology behind wanting to feel normal a little bit. I think that's what it was for us."

The Winnipeg ice-cream shop Bridge Drive-In closed its drive-thru just two days after opening because of traffic congestion that created friction with neighbours.

People also waited over two hours in their cars to pick up a box of doughnuts in Mississauga, Ont.

And gardening, considered a non-risky outdoor activity after a long winter, created a backlog at an Ontario greenhouse when it opened recently.

Mike Priest was assigned a curbside pickup time to collect a gift card and hanging basket at Bradford Greenhouse in Barrie.

That took an hour and 20 minutes.

"We had been assigned a time to show up, arrived right on time and saw about 10, 15 cars," Priest said in a message to The Canadian Press.

"Figured that wasn’t too bad until we got near the front of the line and realized it was just a line to get into the main line, which was over 100 cars long."

James Danckert, a University of Waterloo psychology professor who specializes in boredom, says long lines for non-essential items may be born out of people's desire to wrest back part of their pre-pandemic lives.

"The pain of lining up is something that you're willing to undergo because you get the freedom to do the thing you haven't been able to do for eight weeks," Danckert said.

"The routines in our daily life before all this happened at least had some variety to them."

Want to know if there's a lengthy lineup — human or automobile — before you go to the store? There's an app for that.

Mike Kolb of Aurora, Ont., whipped up a web-based app after seeing  shoppers waiting outside a Costco at 7 a.m. in April.

The crowd-sourced Lineups.live relies on people inputting the length of a line or the amount of time they wait in real time — not waiting until they get home to do it.

"There are a couple hundred people every day ... that are actually entering data," Kolb said.

Kolb said he's had 410,000 visits in four weeks. Wait times at big-box, grocery, convenience and liquor stores have been the most sought-after information.

"It went viral across Toronto and then across Canada," Kolb said. "I've put in a few enhancements, but I don't know how long lineups are going to last.

"If lineups are going to be a thing of the future, then I will upgrade it."

This report by The Canadian Press was first published May 15, 2020