CALGARY — The lawyer for a teen charged with first-degree murder in the hit-and-run death of a Calgary police officer says it will likely be a difficult case because of the high level of scrutiny it is already generating.
Jan 21, 2021 12:45 PM By: Canadian Press 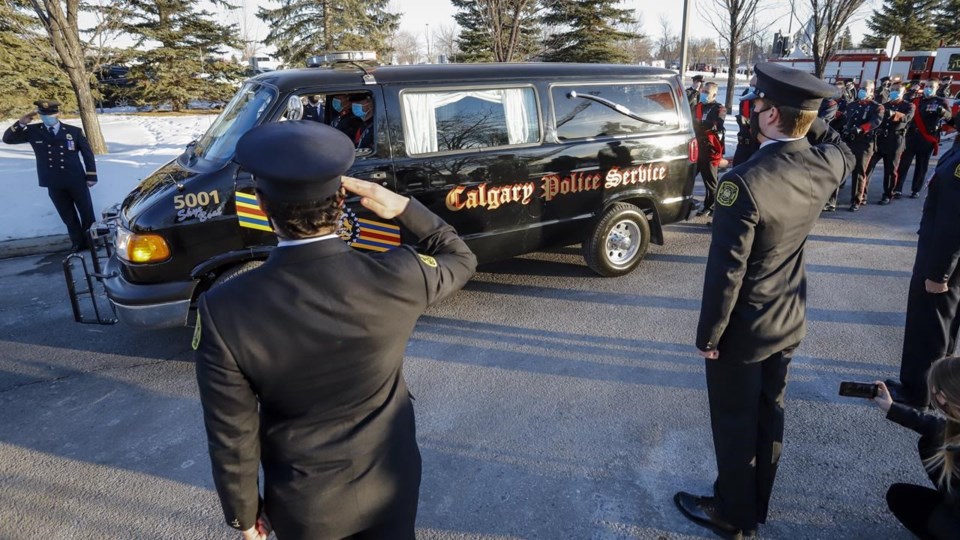 CALGARY — The lawyer for a teen charged with first-degree murder in the hit-and-run death of a Calgary police officer says it will likely be a difficult case because of the high level of scrutiny it is already generating.

Kaysi Fagan spoke to reporters at the conclusion of a two-day bail hearing Wednesday for her client, who was 17 at the time Sgt. Andrew Harnett was killed on Dec. 31 and cannot be named under the Youth Criminal Justice Act.

Police have said Harnett was hit and dragged while attempting to stop an SUV after noticing its plates didn't match its registration.

They allege the accused youth was driving the vehicle and a 19-year-old man, also charged with first-degree murder, was a passenger.

"Certainly any time there's a death, whether it be an officer or a member of the public, certainly it's more difficult. The exposure's greater, the attention is greater, scrutiny is greater," Fagan said.

She said the fact that Harnett was a police officer, killed in the line of duty, will add to the divisiveness when it eventually goes to trial.

"When the police kill someone it takes a year to investigate it, maybe there's charges laid, maybe there aren't. Here's we've got a first-degree murder charge laid against a youth within 12 hours. So I think it's a bit of a double standard," Fagan said.

"Certainly the fact an officer was killed here is concerning to the public and obviously it's going to be very divisive."

Youth court Judge Steve Lipton has reserved his decision on bail for the teen suspect until Jan. 28.

Crown Prosecutor Doug Taylor is opposed to his release.

"The young person ought to be detained for both the safety and the protection of the public, and to maintain confidence in the administration of justice," Taylor said.

He told court Tuesday that the Crown will seek an adult sentence for the youth if he's convicted. That would mean life in prison with no eligibility of parole for 10 years.

The co-accused in the case, Amir Abdulrahman, is to appear in court on Feb. 4. His lawyer, Balfour Der, has said he intends to seek bail on Feb. 12.

This report by The Canadian Press was first published Jan. 20, 2021