Not a sprint star: Research says T. rex was built for distance, not speed 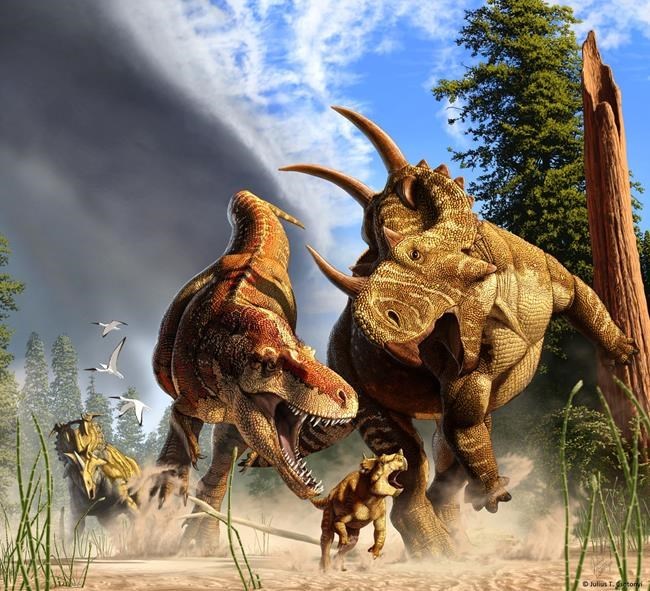 A Daspletosaurus (centre left), a close relative of T. rex that shared its way of moving, chases down a Spinops with a Coronasaurus (right) looking on in a handout ilustration. THE CANADIAN PRESS/HO--Julius Csotonyi

Tyrannosaurus rex, one of the most feared predators in the Age of Dinosaurs, may have been built for endurance, not speed.

A paper published Wednesday takes recent research on how mammals move and applies it to dinosaurs. Its conclusions support theories that the massive meat-eaters hunted in packs and opens a window into the ecology of the ancient forests they roamed.

"We're trying to figure out how much energy is going into and flowing through paleo ecosystems," said Hans Larsson of Montreal's McGill University, one of the paper's co-authors.

"If we can't get an estimate for what it takes to feed the apex predators, then we have no chance of estimating anything else."

In the past, that's been done using a formula based on hip height.

"That, coupled with body mass, can tell us a lot about speed," said Larsson.

The problem is that an animal's speed comes from many factors — the relative length of certain leg bones; whether it runs on its toes or its heels; its size.

Consider the elephant. Its hip height is lengthy, but a gazelle can run rings around it.

"Lots of other things come into play," Larsson said.

"What we wanted to do was recalibrate ... dinosaur speed using some really cool new papers that have come out using mammals, especially really large mammals."

Larsson applied those papers to dinosaurs, bringing body mass into the calculation.

Earlier papers proposed T. rex could achieve speeds of up to 70 km/h — a lightning pace for an animal that would have weighed more than 10 tonnes. Larsson suggests its top end would have been closer to 20 km/h.

But, he adds, T. rex's long legs would have made that a very efficient 20 km/h, a pace that could be kept up for quite a while.

Larsson asked what that could mean.

"If this were their mode of hunting, being able to go much greater distances at a pretty good clip, what kind of lifestyle would that be? The animals that do this today are ones, like wolves, that hunt in packs."

Near Red Deer, Alta., a group of many large, meat-eating dinosaur fossils appear to be from members of a single flock.

Understanding how the top predator in the forests of the Cretaceous era moved and hunted allows scientists to also ask better questions about that ancient ecosystem.

How much food would T. rex have needed to move that huge body at that pace? How much prey would have had to have been available? What would that prey have needed to eat?

Answering those questions will have direct benefits for modern biology, Larsson said.

"Some of the fundamental questions on current ecosystems are still not there. In most cases, we don't even know what the food web is."

Rebuilding an ancient food web from sketchy fossil records could give science a road map to find its way through the incredible complexity of a living forest, he said.

"We can start off with a paleo ecosystem and start developing ideas that can be used to begin tackling these questions in living ecosystems. The data become far simpler."

This report by The Canadian Press was first published May 13, 2020

Alberta reports 19 new cases of COVID-19
May 25, 2020 4:39 PM
Comments
We welcome your feedback and encourage you to share your thoughts. We ask that you be respectful of others and their points of view, refrain from personal attacks and stay on topic. To learn about our commenting policies and how we moderate, please read our Community Guidelines.