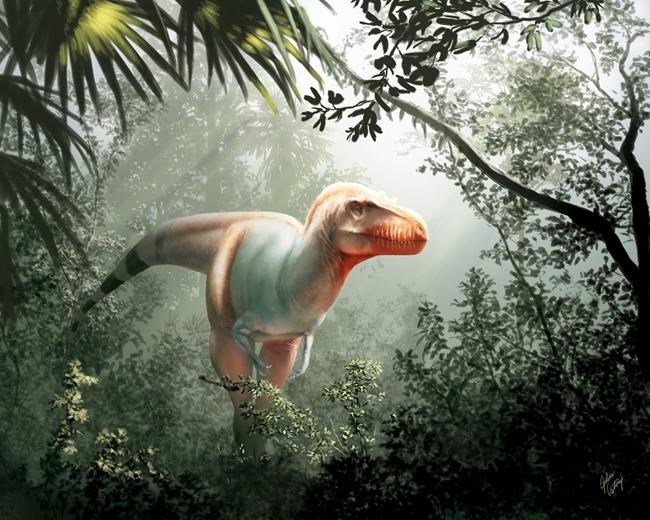 CALGARY — A fearsome lizard with a name meaning "reaper of death" is the first new tyrannosaur species to be identified in Canada in 50 years, say researchers with the University of Calgary and the Royal Tyrrell Museum.

Tyrannosaurs were large meat-eating dinosaurs that walked on two legs and had short arms, two fingers and massive skulls with dagger-like teeth. Tyrannosaurus rex is the most famous in this group.

Jared Voris was examining skull fragments stored in a drawer at the Royal Tyrrell Museum in Drumheller, Alta., as part of his masters thesis when he noticed features not seen in other tyrannosaur specimens. The most obvious were prominent vertical ridges along the upper jaw line.

"We'd find one feature, and then we'd find another, and then it would just kind of cascade into finally understanding that this was something completely different than what we'd seen before," said Voris, who is now working on his PhD in paleontology at the University of Calgary.

Voris, 25, said "it's definitely a weird feeling" to make a big discovery so early in his career.

He figures the beast could have been about eight metres long with an 80-centimetre skull.

"It would have been quite an imposing animal," he said. "It definitely would have caused some panic."

The new species is named Thanatotheristes degrootorum, which combines the Greek word for "reaper of death" with the name of a southern Alberta couple, the DeGroots, who happened upon the fossil fragments along the shore of the Bow River west of Medicine Hat, Alta., in 2010.

Darla Zelenitsky, who is Voris's PhD thesis supervisor, said Thanatotheristes predates T. rex by about 12 million years and is the oldest known tyrannosaur discovered in Canada.

She said it offers clues about a poorly understood time period.

"We're learning more about the ecosystem at this older period of time when dinosaurs roamed southern Alberta," she said.

Only two other dinosaurs have been found in the same rock formation, and both were plant-eaters.

"This is the first apex predatory dinosaur species known from this formation," said Zelenitsky.

"To me this is a big discovery and it's even more exciting because it was made by one of my students."

The new tyrannosaur is not believed to have been a direct ancestor of T. rex, but was its own evolutionary offshoot. It seems to have more in common with a type of tyrannosaur found in Alberta called Daspletosaurus.

Francois Therrien, a paleontologist at the Royal Tyrrell, said the general public can play a role in new discoveries, just like the DeGroots did.

"A lot of people go in areas that paleontologists would not think of going, either because we're unaware that there's exposures in that area or just because there's bigger pockets of badlands that we tend to focus on," he said.

Anyone who finds a fossil should leave it where it is, note its exact location and contact the museum, he said.

Therrien, who also worked with Voris, said the student's discovery is significant.

"First, discovering a new species and, second, it is a tyrannosaur. I don't think it gets any better than that."

An article detailing Thanatotheristes degrootorum and written by Voris, Zelenitsky, Therrien and paleontologist Caleb Brown, was published Monday in the journal Cretaceous Research.

This report by The Canadian Press was first published Feb. 10, 2020

Note to readers: This is a corrected story; An earlier version had the incorrect name of the dinosaur species in the final paragraph.

Mickey Wright, golf great and early LPGA force, dies at 85
Feb 17, 2020 6:51 PM
Comments
We welcome your feedback and encourage you to share your thoughts on this story. We ask that you be respectful of others and their points of view, refrain from personal attacks and stay on topic. To learn about our commenting policies and how we moderate, please read our Community Guidelines.