Some pork farmers operating at a loss due to COVID-19

“This is as bad as we’ve seen it,” said Alberta pork farmer Jurgen Preugschas.
May 30, 2020 3:23 PM By: Jennifer Henderson, Local Journalism Initiative reporter 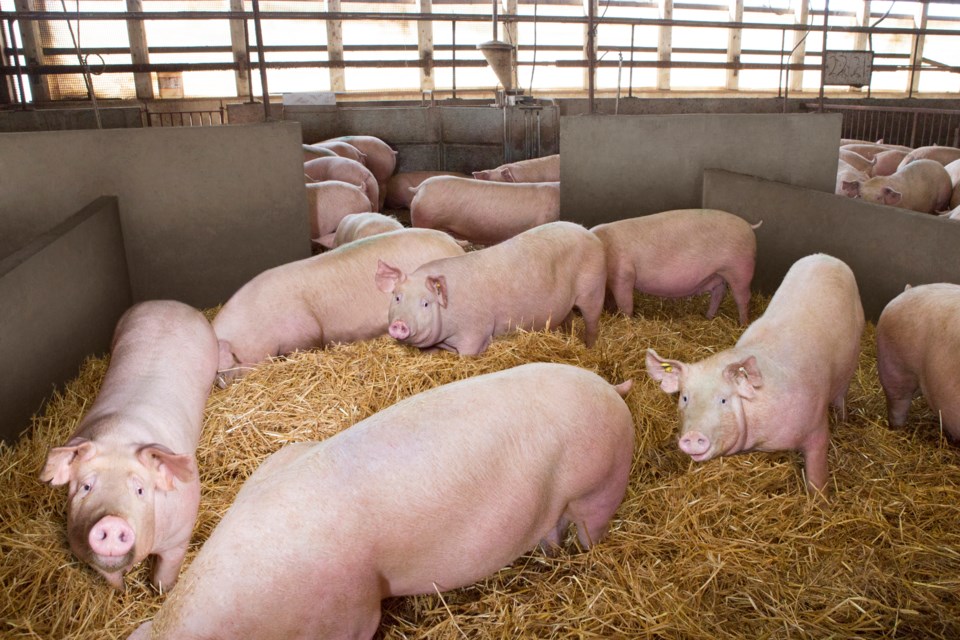 Some pork producers in Alberta are raising their animals at a loss as the COVID-19 pandemic pummels the hog market.

“We’re basically asking these farmers to produce food for us and go broke,” Fitzgerald said.

The fortunes of Canadian pork farmers are often closely linked to the pork industry in the U.S. The shutdown of U.S. pork processing plants has pounded the Canadian pork industry – while pork plants in Canada have been mostly saved from the catastrophic viral outbreaks that hit beef plants, several outbreaks at U.S. pork plants mean that country’s processing power has dropped by an estimated 25 per cent to 50 per cent.

Some hogs are sold on a futures market, which means market speculators try to predict whether the value of a commodity will go up or down. As U.S. plants shut down, there has been more supply than processers can handle, crashing the price of the product.

“The problem really for the hog industry ... is the prices crashed and it’s crashed into the futures as well,” Fitzgerald explained. “At the end of the day, because of COVID-19, the farmer just isn’t getting paid.”

That's despite global demand for pork surging and supplies dwindling due to an outbreak of African swine fever.

China, the world’s largest consumer of pork products, has faced an outbreak of the swine fever over the last year, leaving them with a mass shortage of the popular protein. The country consumes as much as 50 million tonnes of pork per year and is expected to be short between 20 and 30 million tonnes this year. World exports of pork clock in at around 10 million tonnes, with Canada exporting one million tonnes.

There are approximately 200 producers in Alberta raising around 3 million finished hogs annually.

Jurgen Preugschas, who has been a pork farmer for 40 years near Mayerthorpe and was the former president of the Canadian Pork Council, said this has been a tough year for the industry.

“This is as bad as we’ve seen it,” Preugschas said.

The industry has faced hard times before and spent more than a decade in crisis between 2001 and 2013, during which time roughly a quarter of the farms in the country closed. Hog production dropped from 32 million animals Canada-wide to 25 million.

Those challenges were brought on by a high Canadian dollar, which lowered the price for pork internationally; high feed prices and mandatory country-of-origin labelling laws in the U.S. drawing business away from Canadian products.

The industry adapted during that rough patch, with many processing plants purchasing pigs and paying farmers to raise them to slaughter weight.

One such plant is Olymel in eastern Canada, the country’s largest pork producer. Olymel was forced to close a plant in Quebec for 14 days, starting on March 29, after nine employees tested positive for COVID-19, causing a backlog of 90,000 pigs waiting for slaughter. Shutdowns of Canadian pork plants haven't had a major impact on production levels, though: in the five weeks leading up to May 2, Canadian plant shutdowns caused the country’s plants to slaughter just 1.3 per cent fewer hogs than they did over the same period the previous year.

Backlogs – even small ones – are more difficult to manage in the pork industry than in other industries like cattle. When pigs are ready for slaughter, they need to go to slaughter, since there is not enough pen space to hold them back while continuing to take in the newer, younger pigs required to keep the food chain going. That means if one processing plant goes down in Western Canada, it could be catastrophic for the industry.

In the U.S., shutdowns have caused a backlog of 600,000 pigs per week, which dropped the price of the product in both the United States and in Canada. The two countries' hog markets are very intertwined, and when the backlog in the U.S. caused the price of American hogs to drop, Canadian prices dropped as well.

In 2013, Preugschas adapted with the industry and secured a contract with Olymel. The new business model, known as “custom finishing”, works like a pig hotel, Preugschas says: he receives 25-kilogram pigs from Olymel and raises them until they weigh 125 kilograms. The process takes roughly 17 weeks, and then the pigs are shipped to the Olymel plant in Red Deer for slaughter.

He said that contract protects him from fluctuating market prices, since he doesn’t own the pigs outright. That means the Preugschas farm, known as Pigs R Us Inc., isn’t suffering as much from the impacts of COVID-19 as independent pork producers. Those independents are seeing their prices tank by 50 per cent.

Fitzgerald said he has been fielding a lot of calls from farmers across Alberta who say they could have to shut down their operation if they don’t get government help. The last thing they want to do is have to euthanize pigs, and Fitzgerald said most prefer to keep them and sell them at a loss.

“A lot of them will take the hit and feed them … and be in the hole hundreds, if not millions, of dollars in some cases – and then (they) just have to figure out what they’re going to do next to try to come back out of that,” Fitzgerald said.

“We might just see a decrease in the number of pig farms in Canada, which isn’t very much already.”

Without government support, it’s also hard for local pig farmers to compete with U.S. producers who receive a lot of government subsidization

On May 5, the federal government announced $252 million in agriculture funding to support the Canadian food chain, but pork producers say that doesn’t go far enough. Industry experts have estimated pork producers will lose $675 million in 2020, and the Canadian Pork Council has been asking for $20 per hog to feed the animals and keep the lights on for pork operations.

“For the past five years we have heard from our government that they want to help us to grow our sector, yet when our house is burning, they are offering us a glass of water to save it,” said Rick Bergmann, Canadian Pork Council chair, in a statement.

“We are thankful (Agriculture and Agri-Foods Minister Marie-Claude Bibeau's) continued advocacy for our sector, but Canadian pork farm families are in danger. Should they fail, food insecurity will increase as supplies tighten and food gets more expensive.”

Fitzgerald said in the end, farmers may stop producing hogs, requiring the country to import products from large American producers instead of relying on producers here at home. Right now, Canada is the third-largest pork producer in the world.

“If we get pushed out of the marketplace, you’re really reliant on foreign countries to supply what you have for food products,” Fitzgerald said.

Jennifer Henderson covers rural Alberta matters under the Local Journalism Initiative, which is funded by the Government of Canada.