The latest developments on COVID-19 in Canada on April 27 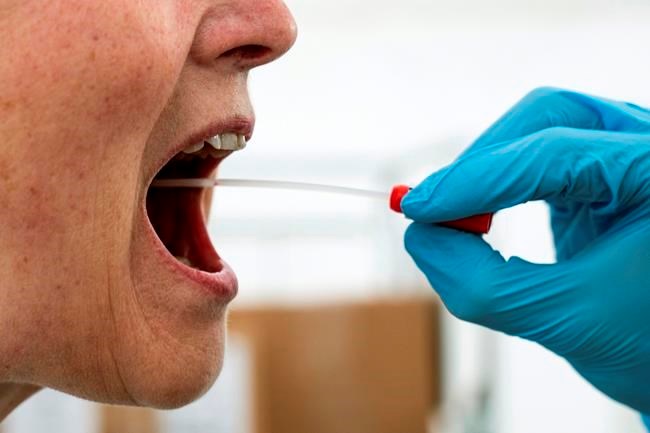 A medical worker performs a mouth swab on a patient to test for Covid-19 coronavirus, in tent extension of the Rigshospitalet Hospital, in Copenhagen, Denmark, Thursday, April 2, 2020. THE CANADIAN PRESS/AP-Niels Christian Vilmann/Ritzau Scanpix via AP

Here is the latest news on the COVID-19 global pandemic. This file will be updated throughout the day (all times Eastern):

Over the past two days, 50 people have tested positive for the coronavirus, bringing the total to 1,998.

Three more people have died, raising the provincial toll to 103.

Henry says the rate of transmission has slowed and they're finding more links to outbreaks with increased surveillance, which means it's getting closer to the time to start easing restrictions.

Officials say there is an outbreak involving 14 people at the Bearspaw First Nation in the southern part of the province.

The government says it's dealing with an outbreak in the far north with many of the cases in and around La Loche.

Health officials says many of La Loche's cases are associated with travel to northern Alberta.

Health officials say another person in Saskatchewan has died from COVID-19, bringing the death toll in the province to five.

The government says the resident was in their 80s and hailed from the far north.

The region is experiencing an outbreak of cases with the mayor of La Loche, a remote community about 600 kilometres northwest of Saskatoon, saying it had around 20 cases.

The Saskatchewan government reported 12 new cases today for a total of 365 infections. It says 288 people have recovered.

The Manitoba government is reporting one new COVID-19 case, bringing the total to 272 cases -- 261 confirmed, 11 probable.

With more people recovering, the number of active cases has dropped to 61.

The government is set to announce a plan later this week to gradually reopen non-essential businesses and other services.

The government is also, as of Friday, banning personal care home workers from working at more than one home in order to reduce the risk of spreading the virus.

New Brunswick is reporting no new cases of COVID-19 for the ninth consecutive day.

The provincial total remains at 118 cases, and 112 of them are considered recovered.

Chief Medical Officer of Health, Dr. Jennifer Russell says while the lack of new cases is good news, the province is nowhere near being able to declare victory over the virus.

Ontario says its plan to ease restrictions introduced because of the COVID-19 pandemic will happen in three stages, though the steps unveiled today contain few specifics or timelines.

Stage one in the framework published today could include opening select workplaces, opening parks, allowing for more people at certain events such as funerals and having hospitals resume some non-urgent surgeries.

Stage three would include having all workplaces open and further relaxing rules on public gatherings — though large ones such as sports events and concerts would still be restricted.

Quebec Premier Francois Legault says elementary schools and daycares in the Montreal region will re-open May 19 and attendance will not be mandatory.

The premier said today elementary schools and daycares outside the greater Montreal area will open a week earlier, on May 11.

Legault says high schools, junior colleges and universities will remain closed until September and Legault is urging those institutions to do as much online teaching as possible.

The premier says he is reopening up elementary schools and daycares because the COVID-19 infection rate in the province's hospitals is under control and the virus is generally not dangerous to young children.

Quebec Premier Francois Legault is announcing 84 more COVID-19 deaths in the province, for a total of 1,599.

Legault says the COVID-19 situation is largely under control with the exception of long-term care centres, where 75 of the 84 new deaths originated.

He thanked the thousands of people who have submitted CVs to work in the facilities, including Olympic medal-winning figure skater Joannie Rochette and Super Bowl-winning football player Laurent Duvernay-Tardif.

Federal officials are warning Canadians who have recovered from COVID-19 against thinking they may be immune to the respiratory illness.

While there has been talk in some countries of doling out "immunity passports" to those who have had the illness, Canada's chief public health officer Dr. Theresa Tam says the science around immunity is still unknown.

Tam says it's expected that those who have had the illness have some type of immunity, but exactly how strong it is and how long it lasts still needs to be determined.

Tam says public-health officials across the country are working to better understand the science because understanding when people become immune to COVID-19 will be critical as different jurisdictions look to start easing restrictions.

Newfoundland and Labrador is reporting no new cases of COVID-19.

The province has confirmed 258 cases of the illness and 221 people have recovered.

Dr. Proton Rahman, a clinical scientist and professor of medicine at Memorial University of Newfoundland, presented models today looking at the spread in the province, showing the first wave of infections has been brought under control.

Rahman says it's appropriate to start thinking about reducing public health measures in a phased and controlled way.

For the 12th straight day, Prince Edward Island is reporting no new positive cases of COVID-19.

The province has had 26 cases and 24 are considered recovered.

Chief Public Health Officer Dr. Heather Morrison says the plan to ease public health restrictions is being finalized and should be released this week.

Those include ensuring each province has evidence that transmission of COVID-19 is well controlled in their borders and that public health systems can properly diagnose infections and do contact tracing.

Njoo says public health officials are still divided over the widespread use of masks.

The country's chief public health officer, Dr. Theresa Tam, also spoke on efforts to improve testing to reduce the number of false negatives that continue to turn up.

Ontario will become the latest province today to present its plan for gradually reopening its economy, after Saskatchewan, New Brunswick and Prince Edward Island laid out their own schedules last week.

Trudeau says the ongoing discussions between provincial governments and Ottawa are informing how provinces decide what parts of their economies to reopen and which restrictions to scale back.

Yet Trudeau is also warning against throwing away the gains that have been achieved through the past few weeks of sacrifice by throwing caution to the wind, noting the second wave of the Spanish flu in 1918 was particularly devastating.

Prime Minister Justin Trudeau says his government is working with other federal political parties to establish support mechanisms for students.

Trudeau hinted that legislation aimed at helping students will be a focus when members of Parliament hold their first virtual House of Commons session tomorrow and a special in-person sitting on Wednesday.

He also referenced Ontario's decision over the weekend to boost the pay of essential workers by $4 an hour as an example of other types of measures the government is talking about with the provinces.

Trudeau also said the federal government has no plans to close borders or restrict movement between different regions to prevent the spread of COVID-19 as provinces begin to re-open their economies.

Prime Minister Justin Trudeau says 10,000 businesses have applied for the federal government's new wage subsidy since applications for the program opened at 6 a.m.

Trudeau says the number of applications underscores the scope of the challenge companies are facing because of the COVID-19 pandemic.

Companies will be able to receive up to $847 per employee per week from the federal government.

Trudeau says the money should start flowing by May 7.

Nova Scotia is reporting 27 new cases of COVID-19, pushing the number of confirmed cases to 900.

Health officials say 12 people are currently in hospital with three of those patients in intensive care.

A total of 24 people have died as a result of contracting the virus, with the majority of the deaths occurring in nursing homes.

That brings the total of cases in the province to 14,856, a 2.9 per cent increase over Sunday's total, continuing several days of lowering growth rates.

In long-term care — information that comes from a separate database — there were 17 more deaths in the previous day and there are now outbreaks in 150 homes.

Ontario Premier Doug Ford is set to lay out his plan today for reopening the province.

All businesses deemed non-essential were ordered to close last month as part of a series of emergency measures meant to curb the spread of the virus.

The state of emergency was recently extended until mid-May.

A new survey released today shows half of Canadians who participated report their mental health has worsened due to the COVID-19 pandemic.

The study by the Angus Reid Institute aims to shed light on how the economic uncertainty and social distancing measures brought on by the pandemic have affected the psychological well-being of Canadians.