Gout: no longer the blue-blooded disease 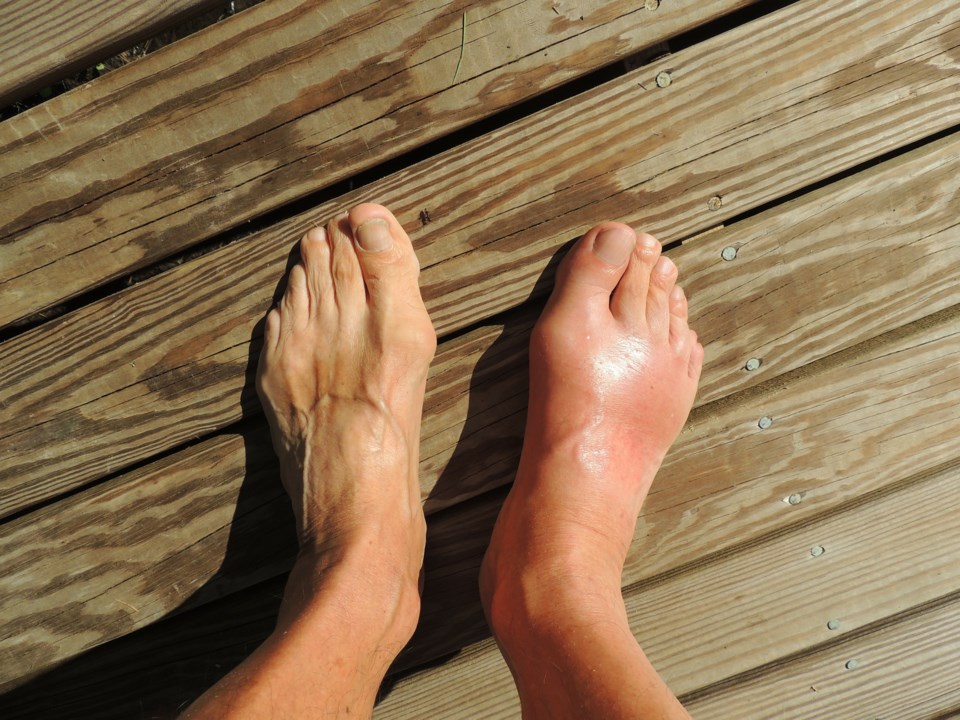 Gout is largely genetic, but you can apply healthy lifestyle practices to reduce chance of a flare-up. Photo submitted.

King Henry VIII of England offers an excellent example of how too much wine, rich food and obesity trigger the agony of gout. But why did Leonardo da Vinci, Sir Isaac Newton, and Benjamin Franklin, to name a few, develop this excruciating disease? And how can you decrease the risk?

More than nine million North Americans suffer from gout, a type of inflammatory arthritis in which the body produces too much uric acid, or the kidneys fail to excrete enough.

Genes play an important role. Gout and diseases such as diabetes are more likely to occur if there is a family history. But given the rise from only 3 million cases just over a decade ago, more than genetics is driving the problem.

Uric acid is not friendly to joints. Dr. Larry Edwards, professor of medicine at the University of Florida, said, “People with high levels of uric acid can be accumulating crystals and damaging joints years before they have their first gout attack.”

Dr. John Fitzgerald, professor of medicine at the University of California and co-author of the American College of Rheumatology’s latest clinical practice guidelines for gout, said people diagnosed with gout suffer first from the early stages of Type 2 diabetes and obesity, which increase the risk of gout.  It is a classic example of the Gifford-Jones Law that states one disease often leads to another and another.

The first attack of gout is a huge wake-up call. Dr. Thomas Sydenham, “The English Hippocrates”, died of gout in 1698. He wrote, “The victim goes to bed and sleeps in good health. About 2 o’clock in the morning, he is awakened by a severe pain in the great toe; more rarely in the heel, ankle or instep… Now it is a violent stretching and tearing of the ligaments – now it is a gnawing pain and now a pressure and tightening. So exquisite and lively meanwhile is the feeling of the part affected, that it cannot bear the weight of bedclothes nor the jar of a person walking in the room.”

Will one attack inevitably mean another? If you do not have high levels of uric acid in the blood, kidney disease, and are fortunate to have the luck of the Irish, there is a possibility that years may pass without another attack.

On this premise, your doctor may decide to “wait and see” alongside regular checks of uric acid levels.

But as another attack may occur at any moment with increased risk of injury to kidneys, your doctor may decide it is prudent to start urate-lowering therapy (ULT). There are several drugs that taken daily will lower uric acid and help stop crystals from forming in kidneys.

Studies from the University of California show about one-third of gout patients now receive URT. This treatment may take as long as six months to control the blood level of uric acid. Until lowered, there may be more attacks.

Other studies in the U.S. and the Netherlands have identified genes associated with higher levels of uric acid in the blood, including up to a 40-fold increase in the risk of gout.

Diet can play a role in treating gout. Some doctors suggest cutting down on foods that increase uric acid such as red meat, shellfish, alcohol, and sugar. But results are limited.

Genetic testing holds promise in identifying cases before symptoms appear. For now, prevention is the best course. Adopt a healthy lifestyle to keep gout from suddenly causing a painful wakeup call during the night.