Scoot over for a different (and fun) way to get around 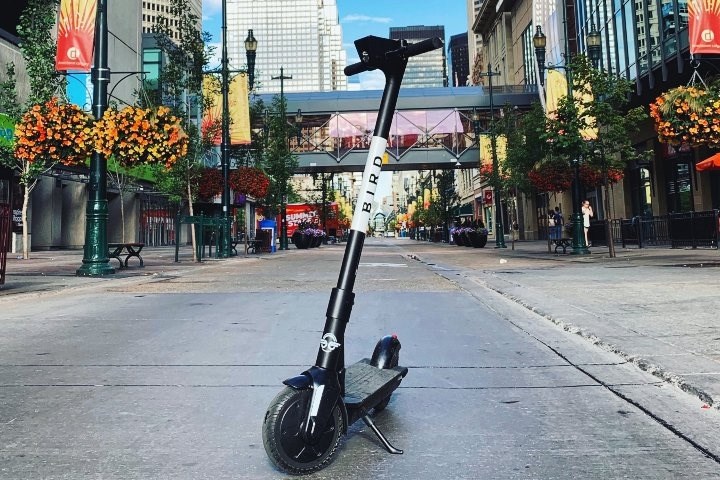 Scooters used to be almost universally the domain of kids.

Now, however, battery-charged electronic e-scooters are being used by people of almost all ages.

“We have riders from 18 to 75,” said Jen Freiman, General Manager of Lime Canada. “Twenty-five per cent of our ridership is over 42.

“Both Edmonton and Calgary have been very busy for us and we hold a 75 percent market share in both cities. Calgary had about 2,800 Lime e-scooters authorized at the end of last year; Edmonton has 4,000.”

While Edmonton was the first city in Canada to bring back e-scooters this year, Calgary isn’t currently allowing e-scooters at this time.

“We think the e-scooters have made both cities more fun to enjoy than they already are,” said Freiman.

Bird Canada, a Canadian company, has 1,000 e-scooters in Edmonton.

“We are in our third year of operation in Alberta; it went very well,” said Stewart Lyons, CEO of Bird Canada.

“We came out of the gate with high demand.

“The majority of our users are in the 25 to 35 age range, but about 15 per cent are over 50. I’m almost 50-years-old and I use them all the time,” said Lyons. “They are easy to ride and fill a transportation gap in my travel routes, whether on daily errands or daily commutes.”

Lime is also in its third year in Alberta while a third company, Spin, joins those companies this year.

“Every major North American city has a program,” said Lyons. “And they are in more than 100 cities across 20 countries in Asia, Europe and Australia.

“Canada has one of the least penetrated programs. Toronto, Vancouver and Montreal - the three largest cities in Canada - don’t have a program in place.”

“It will happen soon,” said Lyons.

“And they are fun to ride.

“They are also dockless; they are left where people leave their trips.”

Freiman added e-scooters “save people time; they are convenient and people enjoy them. They’ve also provided an excellent open-air transportation option during the pandemic.”

“Cheaper than Uber and Lyft, they are about the same price as public transport.

And they are easy to use. Riders download the app, see where the scooters are and when they are finished users just click and that’s all there is to it.

They are also a boon to the local economy.

Lyons said a study out of Emory University in Atlanta demonstrates they are also a boon to the local economies as riders visit local businesses.

The study, which was conducted in four U.S. cities over a six-month period, showed that each e-scooter led to $1,045 in revenue per scooter.

“That equates to about $3 million in sales in Edmonton alone,” said Lyons.

E-scooters are electronically limited to 20 km an hour; braking is the same as a bicycle.

Rules vary, but in Edmonton they can’t be used on sidewalks.

“They are only allowed on bike lanes, shared pathways and on quieter residential streets,” said Lyons. “And they have to be parked in what is called the ‘furniture’ zone, away from sidewalks so that they are out of the way of pedestrian traffic.”

E-scooters are cleaned and disinfected regularly.

Freiman said the next step are e-bikes and mopeds. The latter were launched in Washington, D.C. and Paris in April.