Armchair Travel: We're camping, whether we like it or not 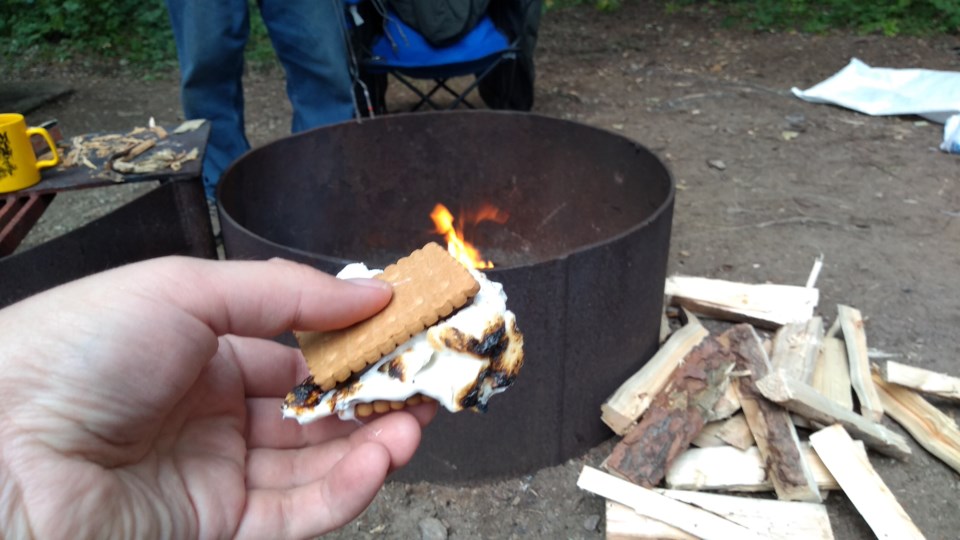 Can you convince your adult kids to camp with you? Add s'mores and a campfire...it helps. Photo: Chris Haines

How long do you continue camping with your kids, when they're all adults? It's a question I ponder more often as each year goes by, especially while staring at the falling-apart (but still functioning) 25 year-old tent trailer in the driveway, and understanding the reality of a household that still includes two twenty-somethings and an 18 year-old.

Do the kids even want to camp with their parents anymore? Often that answer is no, as the adult children find friends a more appealing option for spending their free time. While giggling in neighbouring sleeping bags used to be all kinds of fun when they were little, now it's a definite "No thanks, mom."

But sometimes the lure of a campfire and a s'more can still do the trick, at least for the two boys, and at least for a weekend, so off we went to explore a piece of Alberta we've never checked out--Athabasca County.

Located about 150 kilometres northeast of Edmonton, Athabasca County includes communities like Boyle and historic Amber Valley--a spot settled in the early 20th century by black immigrants to the province from Oklahoma and the southern United States. About 1,000 African Americans emigrated to Alberta from 1909-1911, and while many eventually moved to the city for greater economic opportunities, signs of the community remain--the Amber Valley Cultural Centre and the Obadiah Place provincial heritage site (a homestead of one of the first African-American settler families) among them.

One way into the region is north on Highway 63, the well-travelled route to Fort McMurray that--even with the downturn--still bustles with enough big rigs to keep drivers alert. But overall, the first 100-kilometre stretch north of Edmonton is a peaceful, winding drive along vast farm fields of canola and wheat, grazing cattle and abandoned grain elevators.

Only an hour into the drive, number one son was looking for a signal for his phone.

"This cell-boosting unit we're trying out can't create a signal when there isn't one though, right?" I asked. The trek down a muddy, twisting township road to our campsite at Hope Lake was endured without connection to the outside world. Sorry son.

COVID-19 has changed some camping basics, especially at an unserviced site. Signs on the office door at check-in remind campers to keep physically-distanced. A plexi-glass barrier and sanitized pen with paper asks visitors for contact information in case COVID-19 is discovered. Thank goodness I found an old bottle of hand sanitizer in the trailer ice box (which has never worked as an ice box, hence the sanitizer/toilet paper/matches/playing cards-holding junk drawer that it is).

Son was not impressed that there was no running water. An outhouse is what it is, I told him, and even old sanitizer still sanitizes.

A couple of bags of firewood, marshmallows and chocolate can fix a world of ills. So even though son number two was a bit grumpy--he didn't want to sleep with the rest of us in the trailer anymore, insisting instead on putting up a brand new, two-person tent that he eventually wrestled into submission--as darkness fell, a few rounds of trivia and the campfire soothed all.

This August weekend was cool, but the sun allowed us a couple of hours at the local beach, a small but well-used patch of the campground with clear, refreshing water (warnings of Swimmer's Itch aside) and soft sand. As long as we were full of bacon, eggs and camper's coffee (made in an aluminum percolator with a tin foil bulb replacing the broken top glass knob)--all was right with the world.

That is, until the torrential downpour hit, which thankfully waited to start until we finished our s'mores and were heading into the trailer for bed. Would son number two be swept away in the elements? Did he put the untested tent fly on correctly? The worry kept me awake, as did the cold temperatures in the trailer, more than nippy even with all the window coverings and sleeping bags zipped up. The furnace doesn't work anymore, you see. Of course it doesn't.

Why did we head out again? Ah yes, family fun--staycations--right.

The hub for the region is Athabasca, a picturesque town on the banks of the Athabasca River which calls itself the "Gateway to the Great New North'. Sitting at the junction of Highways 2 and 55, the town makes a great stop for an afternoon picnic or to stretch your legs. A series of signs along the riverfront explaining the local history is a nice bonus.

Did you know Athabasca predates the railway, and was an important part of the fur and transportation trade thanks to the river and Athabasca-Edmonton trail? One learns such things while enjoying a riverfront walk and lunch break of donairs on the way home. There's a self-guided historical walking tour of the town that explains it all in a pamphlet available at the visitors centre or town library.

Alberta snowbirds weigh risks of southern escape this winter
Sep 24, 2020 5:45 PM
Comments
We welcome your feedback and encourage you to share your thoughts. We ask that you be respectful of others and their points of view, refrain from personal attacks and stay on topic. To learn about our commenting policies and how we moderate, please read our Community Guidelines.