As restrictions loosen, can you visit family or friends? Depends where you live 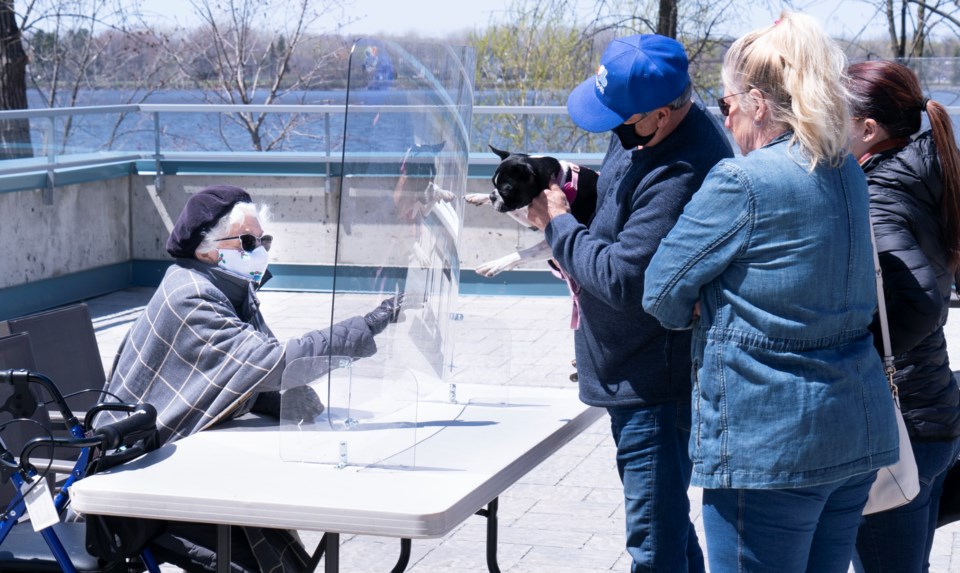 Resident Pierrette Lalonde-Gosselin, 88, chats with family members through a plexiglass shield on the terrace of the residence Au Fil de l'eau in Montreal, on Wednesday, May 13, 2020. As provinces begin to relax physical distancing measures on family gatherings during the COVID-19 pandemic, they'll be doing so at their own pace. THE CANADIAN PRESS/Paul Chiasson

As provinces begin to relax physical distancing measures on family gatherings during the COVID-19 pandemic, they'll be doing so at their own pace.

That means what's going on in New Brunswick may not line up with Ontario-based directives, for example, and those in Quebec shouldn't try to adhere to rules set out by officials in Newfoundland.

Health and public policy experts say that's to be expected instead of a uniform, Canada-wide regulation for scaling back measures put in place to slow the spread of the novel coronavirus.

What makes sense in one region, might not in another.

"Yes, there's a risk that people will say: 'If they can do that there, we should be able to do it here....' But these decisions are being made locally based on local conditions," said Myles Leslie, an associate professor at the University of Calgary's School of Public Policy.

"It's like if you start trying to grow palm trees in your backyard — it's probably not going to do terribly well because that doesn't work in Canada."

New Brunswick and Newfoundland recently introduced new directives that would allow one household to visit and socialize with another separate household — and no others — in a "bubble" system.

Ontario and Quebec, meanwhile, still advise no contact outside of your own household as of Thursday morning.

Dr. Saverio Stranges, the chair of the epidemiology department at Western University in London, Ont., says each province's directives will be driven by their "epidemiological context."

If there's still evidence of community spread — like in Ontario and Quebec, the provinces with the most COVID-19 cases in the country — the best approach is the most cautious one.

And if those provinces were to adopt similar bubble strategies to New Brunswick and Newfoundland, there would be risk in spreading the virus further due to asymptomatic cases.

Stranges said the chance of that is slimmer now than it was a few weeks ago, though.

"The tip of the iceberg — the people who need hospitalization and the people with severe symptoms — is definitely declining, which means the base of that iceberg must also be reducing," Stranges said. "And the potential pool of asymptomatic people in the community is smaller than perhaps a month ago.

"But in this stage where things seems to be going down, I'm still extremely cautious. But that's my kind of attitude."

Stranges said there are certain things to take into consideration for those who are able to visit another household, like knowing the "mobility patterns" of those you're going to be in contact with.

If a front-line health care worker lives in that household, for example, the risk of contracting COVID-19 will be higher, Stranges said.

"If you know that (the person you're visiting) has been also extremely careful over the last seven weeks, you can have more confidence that the risk will be rather slim," he added. "Very much depends on individual profiles of that person in terms of the kind of job that person does and also the degree of social or professional interactions that individual may engage with."

Where the socializing takes place also matters, said Stranges, noting that an outdoor meeting is preferable to an enclosed space.

And physical distancing guidelines should still be followed regardless of location.

"Being in an open space, it's less likely you will have a high bio concentration," he said. "So if you're meeting your brother in a garden outdoors and keeping some distance, that will reduce the risk.

"If you are eating at the table with your brother in a room or in an indoor space, that's a different story. The risk of indoor contagion is still possible if we don't keep that physical distance."

Ontario Premier Doug Ford admitted earlier this week that two of his daughters who don't live in his home visited over the weekend for Mother's Day, essentially going against the rules the province has set out.

Stranges said it's important for leaders and others in the public eye, including epidemiologists and infectious disease experts who can influence policy, to abide by the same standards they're asking of people.

Leslie said leaders risk "losing credibility" when they don't follow their own directives, pointing out American President Donald Trump's apparent reluctance to wear face masks, even when visiting a facility that makes them.

Not everyone will be bothered by that kind of thing, Leslie added, saying it depends on the individual's own "theory of leadership."

Here's what provinces across Canada are recommending for gatherings as of Thursday:

ALBERTA: Only allow essential visitors into your home and keep the visits short; do not visit people most vulnerable to COVID-19; no gathering of more than 15 people is allowed in one indoor or outdoor location. A violation may lead to a $1,000 fine.

B.C.: Avoid crowded places; all in-person gatherings of any size are strongly discouraged.

NEWFOUNDLAND: Two-household bubble in place; gatherings at funerals, burials and weddings are restricted to no more than 10 people, as long as physical distancing can be maintained.

ONTARIO: Avoid visiting friends; no organized public events of more than five people indoors or outdoors (including in private dwellings); gatherings of 10 are allowed for funerals.

QUEBEC: Indoor gatherings are not allowed except for members of the same household.

SASKATCHEWAN: Gatherings are limited to no more than 10 people, inside and outside, within an extended household group only, and while maintaining a minimum distance of two metres between people. Families or friends must remain consistent and can not visit different families or friends every day.

This report by The Canadian Press was first published May 14, 2020.

Camping, RVing a popular option as the summer of COVID-19 approaches
May 22, 2020 11:15 AM
Comments
We welcome your feedback and encourage you to share your thoughts. We ask that you be respectful of others and their points of view, refrain from personal attacks and stay on topic. To learn about our commenting policies and how we moderate, please read our Community Guidelines.