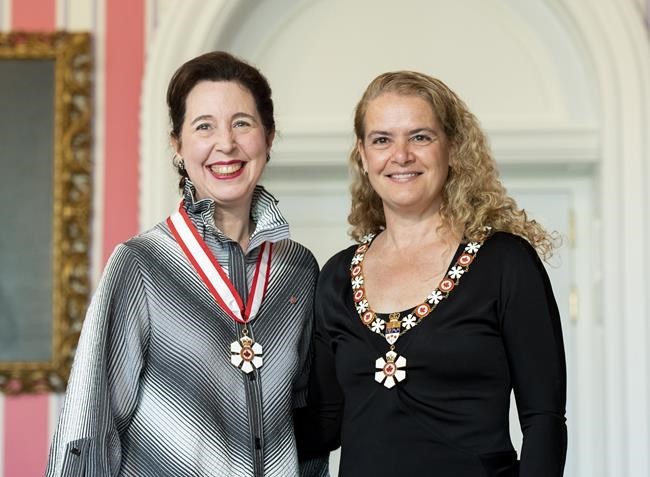 Hewitt shared the news in a Facebook post on Sunday as she reeled from the accident that wrecked her beloved instrument.

In addition to her many concerts, the Ottawa-born virtuoso said she played the customized four-pedal piano on every album she's recorded in Europe since 2003.

Hewitt recalled that the hammers and strings had recently been replaced when she sat down to record "Beethoven Variations" in Berlin about two weeks ago.

Satisfied with the session, Hewitt said she was "feeling elated" as she wrapped up in the control room.

Then the movers came in to tell her they had dropped the piano.

"The movers of course were mortified. In 35 years of doing their job, this had never happened before," Hewitt wrote on Facebook. "At least nobody was hurt."

Hewitt said Italian engineer Paolo Fazioli inspected the hand-built piano and deemed it "not salvageable." From the iron frame to the lid, the instrument is "kaput," she said.

"I adored this piano. It was my best friend, best companion," said Hewitt, who has played with orchestras across the globe. "It was in top form. Now it is no longer."

You can hear the piano on her most recent recording:

Hewitt declined a request for an interview, citing an ongoing insurance process.

The president of Showcase Pianos, which has two locations in B.C., said Fazioli is the preferred brand of some of the world's top musicians, including jazz great Herbie Hancock.

Manuel Bernaschek said prices for the prestigious pianos start at $140,000 in his showroom and can increase dramatically with customizations.

"They say once you play a Fazioli, you see that pretty much all other pianos you have to beat the sound out of the piano. Whereas with Fazioli, it just flows out of you," Bernaschek said by phone from Vancouver.

"Imagine how much time (Hewitt) spent with this piano. So naturally, she feels such a close bond with it."

In her Facebook post, Hewitt wrote that once the "insurance saga" is sorted out, she plans to pick out a new Fazioli piano in Sacile, Italy.

The craftsmen only build about 140 pianos a year, and combined with Hewitt's hectic touring schedule, she predicts it could be months until she gets a replacement.

Until then, Hewitt hopes fans will be able to hear old Fazioli piano's swan song when "Beethoven Variations" is released.

"I hope my piano will be happy in piano heaven," she wrote.

This report by The Canadian Press was first published Feb. 11, 2020.

Museum's Rembrandt knockoff turns out to be the real thing
Feb 17, 2020 10:30 AM
Comments
We welcome your feedback and encourage you to share your thoughts on this story. We ask that you be respectful of others and their points of view, refrain from personal attacks and stay on topic. To learn about our commenting policies and how we moderate, please read our Community Guidelines.