Choirs serenade those shuffling off this mortal coil

For Valda Roberts, it all began about five years ago, when her 96-year-old mother was near the end of her life. A friend had sent her a video of a small choir that gathered around a death-bed to comfort the dying.
Oct 30, 2019 11:00 AM By: Terry Jorden 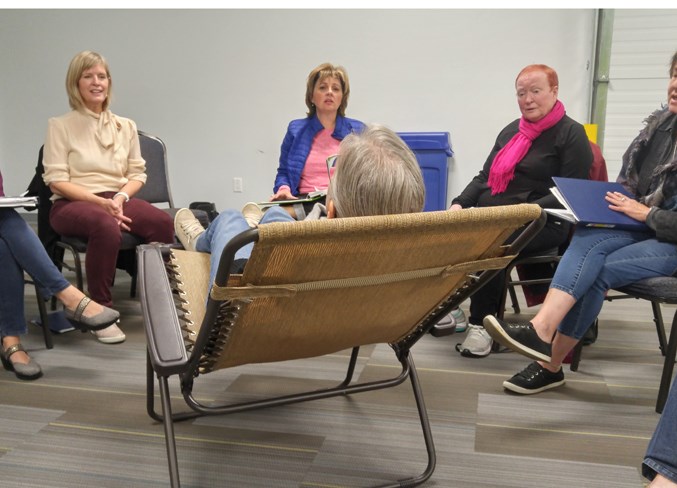 For Valda Roberts, it all began about five years ago, when her 96-year-old mother was near the end of her life. A friend had sent her a video of a small choir that gathered around a death-bed to comfort the dying.

“The video resonated with me so deeply,” recalled Roberts. “Just before my mother passed away… I found myself singing to her in her last moments. It just felt like the most natural thing to do.”

Inspired by the video and her own experience, Roberts did some research and discovered that the choir in the video was one of many 'Threshold Choirs' throughout the US, Canada and beyond. She contacted the head office of Threshold International to see if there was a choir in Edmonton. She was told there was not, but was welcome to start one. From this the Voices of Compassion Threshold Choir was born.

While most of us avoid the thought of death – let alone the idea of volunteering to sing to the dying – Roberts slowly began to gather a group of women interested and musically skilled enough to sing together harmoniously at the bedside of those on the threshold of life and death.

One of those women she found was Dawna-Lynne Duffy Power, now the choir’s communications director.  Earlier in life she had been trained as an opera singer but had been inactive for many years.

She was contacted by her sister who was a member of a Threshold choir in London, Ont.

“My sister called me and said ‘Dawna-Lynne you really have to see if there’s a choir in Edmonton.’ From the moment I saw the Facebook page and met the members and heard the beautiful music – it is so simple but so beautiful – I thought that this was a great way for me to come back to music. We are not performing. We are a service choir.”

During a typical rehearsal, usually held at the Jerry Forbes Centre for Community Spirit, the choir gathers in a circle around one of their members lying in a reclining chair in the centre of the circle.  The person lying in the centre closes their eyes and the singers slowly and softly begin to sing a simple song.  They first sing the melody and then gradually add one or two simple harmony lines, repeating the song like a chant.

The sensation of hearing these beautiful voices surrounding you, and lovingly sung for you, is a powerful and emotional experience.

“Threshold singing is like a genre unto itself,” says Roberts. “It’s all about softness and blending and letting the voices come together.”

Although they may practice in a large group, only three choir members at a time will sing at the bedside. And the music sung is not typical Christian hymns such as Amazing Grace or Rock of Ages, although the choir may sing those hymns if requested. The non-denominational music created by Threshold choirs mostly in the US, has titles like In The Quiet, Stand in the River, Pure Grace, May Peace Be With You, Rest Easy and Walking Each Other Home.  The lyrics contain very little if any religious references so the music can give comfort to anyone regardless of faith or of no faith.

There are now more than 200 choirs around the world, 17 in Canada and three in Alberta including the Voices of Compassion in Edmonton, the Bridge to Peace in Calgary and Alpine Voices in Canmore. .

While the Edmonton choir is seeking new members, Roberts admits that it’s not something that suits everyone. The choir is careful to make sure new members are able to tunefully sing a melody line, a harmony line and be able to blend their voice with others. Then, new members must understand and accept that the choir sings as a service not as a performance.

“It’s a calling,” says Roberts. “People feel that this is a powerful way to be able to give and to be of service. When we sing – we don’t charge anything – we are of service. We align with hospices and palliative care centres and the Caregivers Society of Alberta.”

Tanja Zurbriggen, a registered nurse at Rockyview General Hospital and the choir’s music director, says her choir “tries to bring kindness, connection and peace with the songs.”

The 12-14 members practice at the Wellspring Carma House, and sing regularly at the Sage Centre and the Dulcina Hospice. By invitation, the choir also sings in private homes, care facilities and hospitals and the annual Equinox Vigil.

Zurbriggen says not only does the choir provide a service to others, but it also gives peace and healing to its members.  When her father died a few years ago, she says the Threshold Choir "gave me an outlet to sing and to let go of those feelings of grief.”

Kate Munger is credited with founding the international movement. The earliest seed was planted in 1990 when she sang for a friend who lay dying of HIV/AIDS.  In March 2000 the first Threshold choir gathered near San Francisco before several other choirs formed shortly afterwards in other parts of the Bay Area

To find out more about the choirs in Edmonton and Calgary visit the  www.facebook.com/voicesofcompassionthresholdchoir/ and www.bridgetopeacethresholdchoir.ca