When Audrey Gagnon unloads a flurry of punches on the body opponent bag, affectionately known in the world of the squared circle as BOB, she looks like she means business. The flesh-coloured dummy quivers and recoils.
Nov 27, 2019 11:00 AM By: Jeff Holubitsky 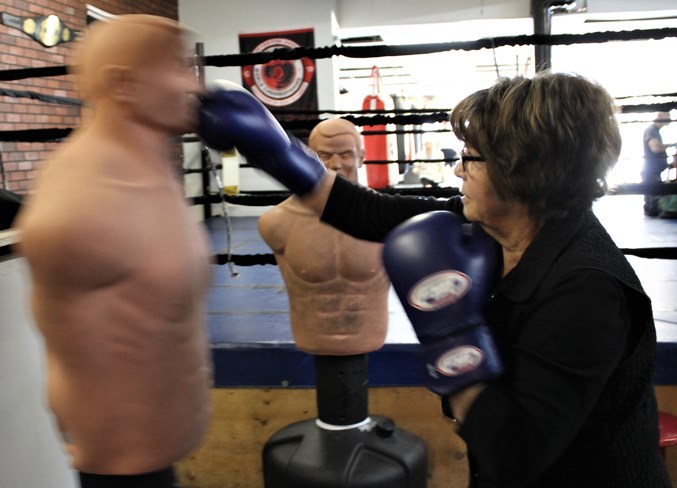 When Audrey Gagnon unloads a flurry of punches on the body opponent bag, affectionately known in the world of the squared circle as BOB, she looks like she means business. The flesh-coloured dummy quivers and recoils.

Gagnon, retired from a long career at the Canadian Standards Association, has been regularly coming to Avenue Boxing Wednesday and Friday mornings for three or four years. She’s not even slightly daunted by the surroundings, where later in the day, many of Edmonton’s up and coming young fighters hone their skills in the sweet science.

Gagnon isn’t here to knock someone out, she part of a group of about 18 Parkinson’s patients battling a much tougher opponent.

“I think the more we exercise with Parkinson’s, the better we feel,” she says. “The workout makes you tired, but it is a better tiredness. It is a lot better than sitting on the couch doing nothing. As far as Parkinson’s goes this really builds my confidence.”

It’s only been about 15 years since owner Roland Labbe converted this space at 88th Street and 118th Avenue from an old furniture store in Edmonton’s historic Alberta Avenue neighbourhood into a boxing gym, but it looks like it has been here forever. With a sparing ring at its centre, the long narrow space is filled with all kinds of boxing paraphernalia. Several different types of punching bags for developing eye-hand coordination hang from the ceiling. Old posters with local and international boxing greats glare down from walls announcing long forgotten fights and blaring classic rock provides the soundtrack.

The old school facility drips with the sweat and testosterone of pugilism, but ironically the place feels homey and welcoming. The surroundings are relaxing, and the Parkinson’s patients and staff are supportive and non-judgmental of each other. In short, it’s damn comfortable and nobody in this program ever hits each other.

Medical research indicates that Parkinson’s causes physical loss in many of the same areas boxers work to bolster, such as agility, speed and endurance. Though no cure exists, the workouts can make a difference in improving some symptoms, according to an American program called Rock Steady Boxing, which was developed specifically for Parkinson’s patients.

Labbe, who earns his living supplying Alberta’s 300,000 anglers with tons of bait though his wholesale company Walleye Master Tackle and Bait, has travelled the world as an amateur boxing referee and referee trainer for the love of the sport. He says he first heard about the American organization about five years ago and approached Parkinson’s Alberta.

“They were pretty excited about it,” he says. “We worked with a therapist from Parkinson’s Alberta to start it and it has grown steadily every year.”

Labbe’s mother had Parkinson’s, but he says she didn’t die from it.

“She died from old age, but she walked every day and she lived until she was 96. She was active and that was the key.”

That’s why he believes a similar program may be right for many older people.

“This is just not for Parkinson’s,” he says. “It is good for all people who are getting to that age where they are not doing anything. You have to think when you are punching. Left, right, left, you have to concentrate on what you are doing.”

He doesn’t want to interfere with the current Parkinson’s setup, but says if enough people show an interest, he could set aside a time for other older people who want the exercise and discipline.

The program’s trainer, Gasper Bonomo, is a former pro boxer and kickboxing champion with a 21-0 record. He was also the first Canadian to simultaneously hold champion belts in both lightweight and welterweight kickboxing classes.

The boxing gym is his school and he understands the benefits of its lessons for the Parkinson’s group.

“I give them boxing drills,” he says. “I can see the difference in them in a couple of months, once their conditioning and strength gets up there.

“Even their punches improve, and I get them to keep their hands up, which is a problem all beginners have. And once they see themselves improving, it helps with their morale and it helps them to stick with it, especially with a lot of the women who come in here thinking this is guy-oriented and that maybe they don’t fit in.”

Bonomo walks over to a punching bag to demonstrate a drill that teaches eye-hand co-ordination and requires participants to pay close attention.

He calls out a pattern of punches, not using the name of the punches, but a universal numbered code. A left jab is one. The right cross is two. The left hook is three. The right hook is four. And so on.

Incidentally, he explains, this how coaches communicate with boxers in the ring, where things happen so quickly it is impossible to describe the punches by name.

His students also work on agility, speed, and practice footwork stepping in and out of a ladder pattern painted on the floor. Each 90-minute session begins with a 10-minute warmup and ends with a cool down, making for a pretty good workout.

The program offers one more benefit for its participants like Audrey Gagnon. It’s an activity that allows them to share their experiences with the only group of people who really know what they are going through – each other. Many head to a café together on 118th Avenue.

“I’ve made a lot of friends here,” she says. “We always go for a coffee after exercising on Wednesdays.”

Labbe doesn’t want to interfere with the current Parkinson’s setup, but says if enough people show an interest, he could set aside a time for other older people who want the exercise and discipline. For more information call 780-472-8253 or go to avenueboxing.ca