VIDEO: Tornado lifts trampoline from B.C. yard, drops it down the block 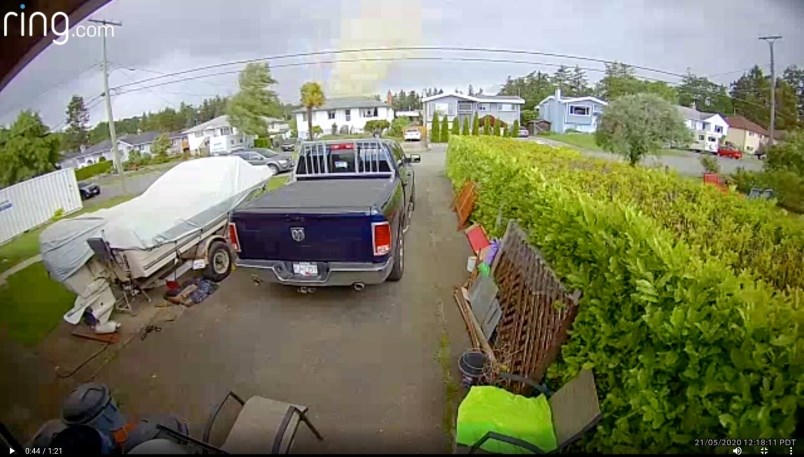 Lindsay Cristante was playing with her boys in their backyard sandbox Thursday when she saw a “big tunnel of sand” approaching with a “low rumbling sound.”

She scooped up Luca, 4, and Leo, 20 months, and took refuge around a corner of the house about 10 metres away. She told the boys to tuck their heads into her body and waited until it passed.

It was only when a neighbour asked if she needed help with the family’s new trampoline that she discovered that it had been picked up and thrown halfway down the block on McBriar Avenue in Saanich.

Environment Canada meteorologists watched a video captured by a neighbour’s security camera and believe the phenomenon was an EF-0 tornado, defined by having winds of between 90 and 130 kilometres an hour.

This type of tornado is the weakest of all possible tornadoes, said Doug Lundquist, Environment Canada meteorologist.

Even so, the trampoline won’t be used again, Cristante said. “It’s done. The frame is broken.”

She was first alerted to the tornado, which hit shortly after noon, when the boys spotted something a few hundred metres up in the sky. “It looked like a kite.”

After the tornado passed through, she saw the item in her backyard: It was a sign from a nearby baseball field close to Lakehill Elementary School.

The family’s back fence was damaged and some flower pots were destroyed. Across the street, a motion-activated security camera mounted on Keith Harding’s garage captured video of the tornado.

Harding was indoors when he looked out the window to see a large cloud touch down, prompting him to tell his children to go downstairs. He could see it sucking up dust and sand from the baseball park. “I didn’t know what was going to happen.”

Lundquist said it is uncommon to see tornados like this in B.C., which are not like the stronger tornadoes seen at times in the Canadian Prairies. The weaker tornados are caused by weather patterns similar to those that cause funnel clouds over water.

This incident is a reminder to tie down anything that could be damaged or blow away in strong winds, Lundquist said.

Read more from the Times Colonist