You can find a way to fight aches and pains 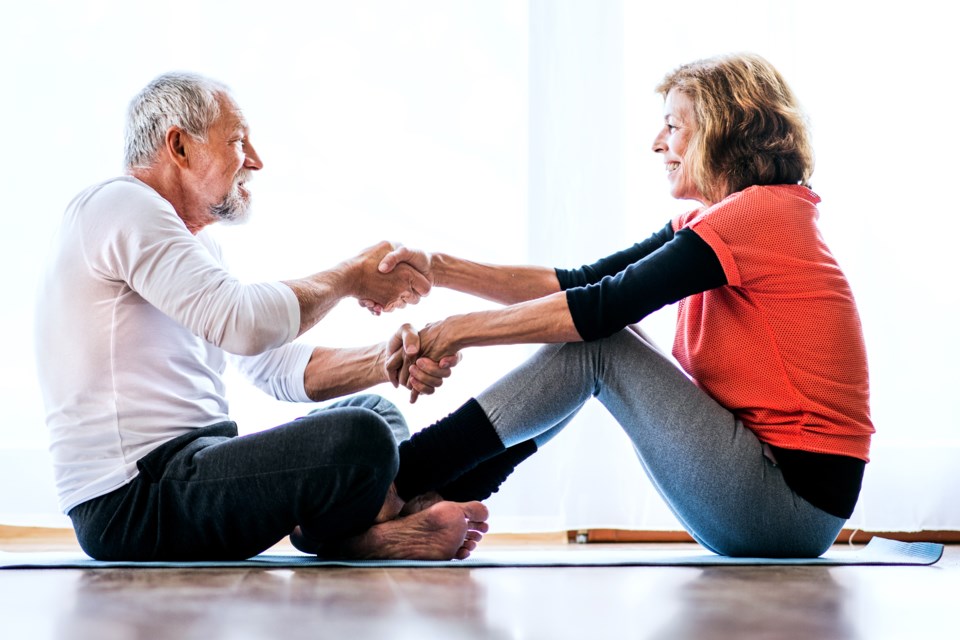 This statement, by Trent Svenningsen, a physical therapist at South Edmonton Physical Therapy and Sport Rehab, isn’t to declare the obvious. It’s to remind us of the natural process of wear and tear in joint tissue and loss of muscle mass as we age, and the aches, pains and stiffness that go with it.

In her study of a sample of Canadians aged 70+, published in Disability and Rehabilitation in July 2009, Rhonda J Scudds reported almost 60% of the women and 48% of the men having some kind of pain within the previous month. More women than men said pain was at least moderately interfering with physical functioning such as moving about, recreational activities and sleep. Not surprisingly, it also lowered mood and enjoyment of life.

As for males, health professionals note the ‘weekend warrior’ syndrome, when older men run into problems because they don’t recognize their bodies are not as resilient as they once were.

But with stretching and exercise, and a realignment of attitude, this doesn’t have to be our forecast.

As each decade passes, we need to be more patient with ourselves and spend more time laying a foundation, says Svenningsen.

Among the most common areas that develop pain in our 50’s are shoulder, lower back, and knees, for a variety of reasons. They include tissue changes around the joints, microtrauma of overuse, habitual positions and postures, and the cumulative effect of past injuries.

Svennignsen notes this is happening at a time when cartilage is starting to lose its fluid content, making it less resilient.

“Tendons are becoming less able to withstand tension, due to poorer blood supply to a tissue that doesn’t have a lot to begin with.”

In the spine, loss of water in the discs leads to thinning and less flexibility. This puts more weight-bearing load on the joints in the back, leading to chronic back pain.

We also lose muscle mass as we age, starting as early as our 30s.

“This places greater strain on the supporting tissues in the body that stabilize the joints, namely the ligaments around the joints and the cartilage that acts to reduce shock to the joint surface,” says Svennignsen.

And since we typically don’t challenge our balance and flexibility as much as in our youth, we’re more vulnerable to sprains and strains when we do something out of the ordinary, like tossing snow after a summer spent at the desk.

But there is good news.

“We need to keep in mind our body also maintains a tremendous ability to adapt and change no matter what age,” says Svennignsen.

As we adapt to post middle age, maintaining strength and toning can’t be emphasized enough. In fact, cardiovascular conditioning and light intensity exercise programs has been shown to be one of the only consistently positive interventions for this type of problem, says Svennignsen.

Another is building core strength. Not only the abdomen, but muscles of the hip, back and even shoulder and thigh play a role here.

“If the central muscles that stabilize you cannot absorb and withstand the pull of muscles that move you, then other structures have to bear this load,” advises Svennignsen.

Core strength is also key in having good balance, which in turn improves agility for all those moves that make up a normal day.

Finally, working on your flexibility keeps joints moving to their potential. It also reduces the likelihood of overstretching a muscle and is important for joint surface nutrition, says Svennignsen.

“Often because of the way muscles attach to or around joints, the joints are vulnerable to abnormal or unequal forces applied to them by muscles that pull too hard for too long, just as much as muscles that don’t pull hard enough.”

One option that can reap rewards is visiting a physical therapist, who can suggest the proper exercises for better movement and relief of pain. And while over-the-counter medicines like acetaminophen may help, Svennignsen recommends not using them for more than a few days without your doctor's okay.

“It’s always a good idea to consult your doctor . . . or physical therapist if you have a specific area that is giving you trouble before you start, to get pointed in the right direction,” he advises.

As for regular activity and exercise to stay in shape, the most important thing is to do something you like, urges Svennignsen, as you’re more likely to stick with it.

Next month, we explore the best exercises for beating lower back pain, and more.

Clive Cussler, adventure novelist, dies at 88 in Arizona
Feb 26, 2020 12:34 PM
Comments
We welcome your feedback and encourage you to share your thoughts on this story. We ask that you be respectful of others and their points of view, refrain from personal attacks and stay on topic. To learn about our commenting policies and how we moderate, please read our Community Guidelines.