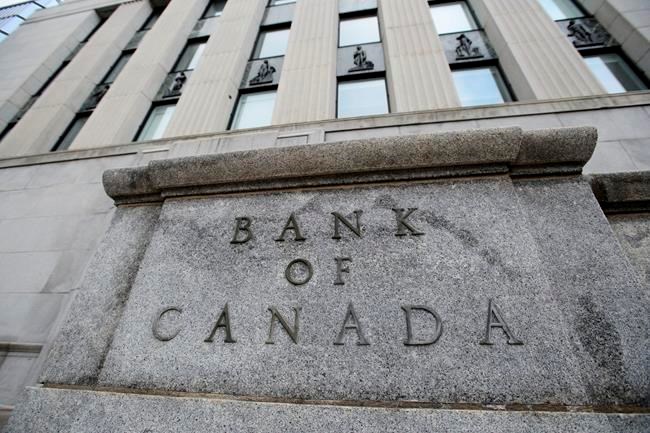 OTTAWA — Mounting cases of the novel coronavirus and ensuing unrest through the economy has upped the odds the Bank of Canada will cut rates this week and maybe more drastically than originally forecasted, economists say.

The central bank's announcement on its trend-setting interest rate lands Wednesday morning, and just days ago forecasters expected a cut of a quarter of a percentage point.

But on the eve of the announcement, the U.S. Federal Reserve swung first, cutting its key rate by half a percentage point after G7 central banks and finance ministers promised to "use all appropriate policy tools" to help stem financial concerns arising from the outbreak.

Economists say the move may lead the Bank of Canada to issue a similar cut in the first of what could be multiple reductions to the central bank's key interest rate target, which stands at 1.75 per cent.

In January, governor Stephen Poloz said the central bank could cut rates if the data supported it, or as insurance against a possible shock to the economy.

"Now with financial markets getting quite concerned that this isn't just a mild outbreak that will slow economic growth but might have more dire consequences, we think the Bank of Canada, taking that on board, they're likely to want to lower the policy rate," Royal Bank of Canada deputy chief economist Dawn Desjardins said in an interview.

She added that such a move would really ensure that Canadian households and companies "are more confident that there are policies being implemented to mitigate some of the downside risk."

The virus has already dampened OECD expectations for economic growth this year. In a report released Monday, the organization made of some three dozen wealthy economies, lowered its year-over-year growth for Canada by 0.3 per cent to 1.3 per cent.

TD Economics chief economist Beata Caranci and senior economist James Orlando wrote in a report on Tuesday that the cards are stacked against the central bank holding rates, despite concerns that it may stoke the fires of household debt.

"Even without an outbreak within a large urban centre, economic activity will be whittled away through more cautious behaviour to travel and attend activities," the report said. The bank's "growth-at-risk framework argues that the next step should be a cut in the policy rate."

Scotiabank's expectation is for a 0.25 per cent cut on Wednesday, with a strong risk of a 0.5 per cent cut. Deputy chief economist Brett House said the Bank of Canada could add to underlying risk factors and possibly compromise growth if it didn't shadow the move out of the United States.

"There is also a confidence effect by showing that authorities are acting," House said in an interview.

A rate cut may not be enough to dampen economic shocks if people avoid spending at brick-and-mortar operations, pointing to a need for government stimulus to prod consumer spending.

A spokeswoman for Finance Minister Bill Morneau said the government was ready to "take action as necessary" to support the economy. Maeva Proteau added the government's fiscal position gives it "the necessary leverage to respond to potential challenges if needed."

The G7 statement released after Tuesday morning's meeting didn't propose any specific or immediate actions governments and central banks may take. Speaking in Halifax, Prime Minister Justin Trudeau said his government will "look for ways to minimize that impact" on Canadian businesses "and perhaps give help where help is needed."