TSX higher to cap good week despite escalating tensions between U.S. and China 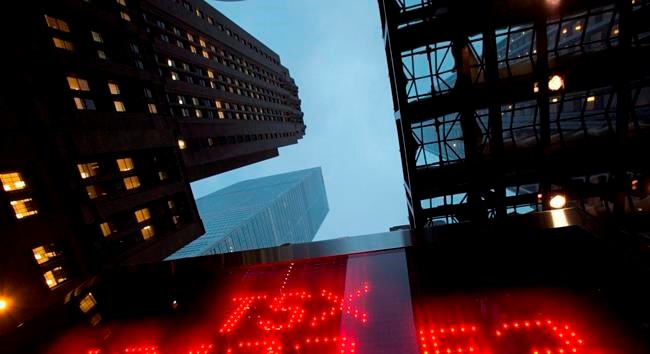 The gains south of the border were even stronger for the week, rising at least 3.2 per cent, despite a quiet day on U.S. markets ahead of the Memorial Day long weekend.

The run-up over the past week and more than 30 per cent climb since the late March lows is confirmation that investors think that a recovery is on its way despite concerns about a second wave of COVID-19 infections, said Kurt Reiman, chief investment strategist for BlackRock Canada.

"I would just say that the grand reopening sale in the stock market happened already several weeks ago and so most of the bargains have been pretty well picked over by now," he said in an interview.

Market gains have coincided with falling earnings estimates for the end of 2020 and 2021.

"So there's just not that much value that's left in stocks given the run-up having happened alongside a sharp downward revision in earnings."

A factor clouding the outlook is growing concerns about friction between the world's two largest economies.

The U.S. senate is moving to delist Chinese companies from U.S. stock market indexes in retaliation to the start of the coronavirus in China.

Also weighing on sentiment was news that China would drop its annual economic growth target for the first time.

"The fact that (the market) was extending gains against what has been a deteriorating backdrop between the U.S. and China, I think is a testament to the emerging optimism about a recovery," said Reiman.

"But looking ahead, I would just argue that it's not going to be a one-way move and that the markets now are pricing in a lot of good news and I think that the upside from here is going to be more difficult."

The Canadian dollar traded for 71.35 cents US compared with 71.76 cents US on Thursday.

Seven of the 11 major sectors on the TSX were higher, led by technology and health care.

Technology got a 2.8-per-cent lift as Kinaxis Inc. rose 5.2 per cent and Shopify Inc. padded its position as Canada's most valuable company with its shares gaining 3.2 per cent.

The tech sector has been a big winner from the coronavirus lockdowns even as some industries have struggled.

"I would just think about technology as having become even more of a staple and a key ingredient to how we live our daily lives and the infrastructure buildout that's going to be needed in the tech space to support what is likely to be a very changed relationship that people have with employment change, relationship with education, entertainment, transportation," said Reiman.

Energy was the big loser on the day, falling 1.5 per cent on a lower crude oil price as Frontera Energy Corp. decreased 5.2 per cent.

For the week, crude has increased nearly 13 per cent, helping to push up equity markets, as demand has grown and production has been cut.

But Reiman warned that the dynamics won't help to lift prices much more over the next six months.

"I still think this is going to be a difficult period for oil because even if the economy is reopened, it doesn't mean that behaviourally people are just going to go back to the way things were."