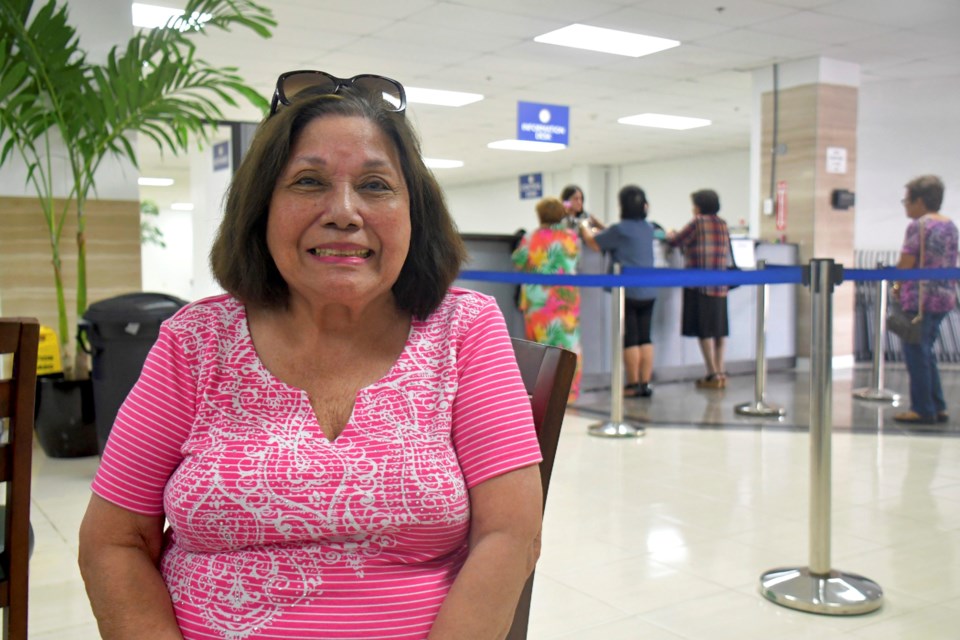 HAGATÑA, Guam — For Antonina Palomo Cross, Japan's occupation of Guam started with terror at church. The then-7-year-old was attending Catholic services with her family when the 1941 invasion began, setting off bomb blasts, sirens and screams.

It ended with her family surrendering their home and eventually carrying the dead body of her malnourished baby sister on a forced march to a concentration camp.

Now 85, Cross is among more than 3,000 native islanders on Guam who are expecting to get long-awaited compensation from the U.S. government for their suffering at the hands of imperial Japan during World War II.

Payments of $10,000 to $25,000 — federal tax money normally reserved for Guam's coffers — will be made to those who underwent forced or internment, suffered severe injury or rape, or lost loved ones during the U.S. territory's nearly three-year occupation. A 1951 peace treaty forgave Japan of the responsibility to pay Guam reparations.

“I’m happy to get it,” Cross said after a recent meeting at central Guam's newly opened war claims office, where she verified her payment was approved. The amount hasn't been determined yet, but “every little bit helps,” she said.

Cross is retired from a local government job and relies on Social Security and her pension to get by. The great-grandmother said the war claims money will come in handy for manåmko' — “elders” in the language of Guam's indigenous Chamorro people — like her.

The United States, which first captured Guam during the Spanish-American War, had a small contingent of troops on the island when Japan invaded on the same December day that it attacked Pearl Harbor. Many were taken prisoner or killed.

But most of those affected by the occupation were Chamorro people, who suffered internment, torture, rape and beheadings. More than 1,100 are estimated to have died during the occupation.

For Cross' family, it meant being forced from their house in Hagatña, the capital, to their rural farm about 5 miles (8.1 ) away before being sent to a concentration camp in 1944. While living at the farm, Cross remembers hiding from foreign soldiers as she walked to her Japanese school, where she was forced to learn the Japanese language and bow in the direction of Japan with her classmates.

Her sister was among an unknown number of Chamorro children who died of malnutrition during the occupation, which ended when the U.S. returned and forced the Japanese to surrender in a bloody battle.

Receiving the compensation now is a bittersweet moment that caps decades of political efforts by Guam’s nonvoting U.S. House delegates to persuade Congress that the people of Guam deserve recognition for their suffering under Japanese occupation.

“At the time the Chamorro people were experiencing this, there was a sense of abandonment by the U.S., and that sentiment has not gone away,” former Guam Congressman Robert Underwood said.

President Barack Obama signed the Guam war claims measure in 2016. It provides $10,000 to those who underwent forced marches or internment, or had to escape internment; $12,000 to those who experienced forced or personal injury; $15,000 to people who were severely injured or raped; and $25,000 to children, spouses and some parents of those killed during the occupation.

The amounts reflect similar war claims paid to survivors of other Japanese-occupied territories. Survivors had one year to apply.

Many say they feel guilty receiving compensation while their parents and siblings who have died did not.

Judith Perez, 76, was only a baby during the war and said she was hesitant to apply for a claim. She teared up as she said the check should be going to her parents, who have long since passed away.

“It’s great to have money, but the people who are more deserving of it are the ones who really suffered physically and mentally, but they’re gone,” she said.

A 1945 law gave Guam residents a brief window to apply for money for war damages, but the bulk of the $8 million in payments were for property loss, not death and injury. Guam also was left out of subsequent legislation that provided compensation to U.S. citizens and others who were captured by Japan during the war.

In 2004, a federal Guam War Claims Review Commission found the U.S. had a moral obligation to compensate Guam for war damages in part because of its 1951 peace treaty with Japan.

Commission member Benjamin Cruz said the U.S. did not want to further burden Japan with reparations as it sought to recover from the war. But the treaty effectively prevented Guam from suing Japan for damages.

The claims are to be funded with so-called Section 30 money, federal taxes that are already remitted to Guam and typically added to its general fund. The program is a compromise after decades of failed attempts to get more expansive compensation supported by both Congress and the people of Guam.

However, Guam Congressman Michael San Nicolas said the law that created the war claims program was missing language needed to allow the U.S. Treasury to release the funds. His bill to fix that error passed the Senate this month and is headed to the House.

“It’s a small amount, and it’s definitely in no way enough to undo the pain of the past, but it’s a token of our respect, our admiration and our love for them,” Paco said.

Emotions were mixed at the war claims office as dozens lined up earlier this month, several with canes, walkers and wheelchairs.

Jesus Meno San Nicolas, 86, recalled his sister hiding in a tree to escape soldiers looking for women to rape.

He was forced to work six days a week in the rice fields as an 8-year-old, walking more than 2 miles (3.2 ) each way every day. He also helped grow cabbage, radishes and other food for the Japanese.

His brothers had to work on the airfield. Once, a Japanese soldier told him to leave the house so he could rape a female relative. Meno San Nicolas still remembers her screaming.

He almost didn’t file a claim.

“It’s not worth it for the money, what they do to us in the family,” he said, his voice cracking with emotion.